The evolution and de-evolution of fly fishing 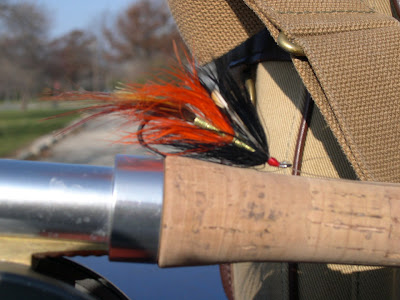 Perhaps it is that I am just getting older, but I am questioning more and more the direction that fly fishing seems to be headed. I am certainly not alone, and this blog post is the result of long conversations with some of the finest anglers, rod builders, and sportsmen that I know. Each conversation has turned slowly but inexorably to this subject. Have the new emerging technologies and the demands that fly fishing extend to places never touched before, and that ease of casting, presentation, etc. allow anglers to fish with ease without having to gain expertise through time on the river?
Or, maybe I am part of a growing movement of backlash against what many see as a highjacked sport. Call us the “Misanthropic anglers.”

Here are the opening remarks from The Longest Silence by Thomas McGuane:

"The sport of angling used to be a genteel business, at least in the world of ideals, a world of ladies and gentlemen. These have been replaced by a new set of paradigms: the bum, the addict, and the maniac. I'm afraid that this says much about the times we live in. The fisherman now is one who defies society, who rips lips, who drains the pool, who takes no prisoners, who is not to be confused with the sissy with the creel and the bamboo rod. Granted, he releases that which he catches, but in some cases, he strips the quarry of its perilous soul before tossing it back in the water. What was once a trout-- cold, hard, spotted, and beautiful--becomes "number seven."

I am bringing up rhetorical questions here. I am guilty of using some of the gear and tactics I am questioning. I don’t have the answers, just the questions. The answers lie in ourselves. Nor should the questions I bring up be considered my opinions. I know I am going to take some heat here, so remember that these are just thoughts.

Is the aid of technology turning fly fishing into baitcasting? Shorter and shorter shooting head lines allow us to cast easier and farther and throw ‘flies’ that have evolved into massive things that resemble lures more than they do anything even seen on the end of a flyline twenty years ago. What is worse is that this has taken over the world of steelhead fly fishing so completely that some people think that they can’t catch a steelhead using any other technique, as if the great pioneers of our sport never could catch a fish. Thinking and adaptation are a natural progression. Throwing out the baby with the bath-water is not.
When does a flyline stop being a flyline and become a bait-casting line? When will anglers lose the ability to cast and instead just chuck it out there? If we design a flyline that is just a two-foot blob of PVC, but weighs the same as a conventional line, is it a flyline? Where is the line drawn? Is there a line? Does the casting define fly fishing? What if we use a flyrod with monofilament line as is done here in the Midwest? What if we use the latest super compact flylines to throw small spoons or spinners? Does the fly make it flyfishing? One thing is for sure, If we ran into the ghost of a great angler of the past century while wandering the river, the ghost would not recognize some of what we do as fly fishing.

Spey rods are getting shorter and shorter and now ‘switch’ rods are all the rage. These are used to throw Skagit lines and giant ‘flies’ made from materials found at craft stores. The proliferation of compacted heads of less than thirty feet with slick running line make it possible for even Elmer Fudd to hit the other side of the river. (I should know…I cast like Elmer Fudd) Some anglers have never used any other system and have never learned to cast even a mid-belly speyline.
Once again, I must stress that I am being rhetorical here. I use Skagit lines too, especially in spring when the water is high and cold. It is so easy it isn’t funny. I started worrying that it might cause me to lose my actual spey casting technique.

Fly fishing has become the newest generation X/Y adrenaline sport, especially in the language used to describe it. Words like “Thrash”, or “Shred”, and “MoFo” are used to describe a day on the water. Gone is the eloquence and the appreciation of nature. Catching fish is the be all and end all. Restraint has been left on the wayside along with everything else from the sporting tradition inherited from the past. Some of these new ‘dudes’ act like they invented fly fishing sometime in early 2000. Perhaps it is the rhetoric and the accompanying tone that is the real problem. As Shane at the quiet pool blog has described it “Screw everyone else, I gotta get mine!”

Online publications such as “This is Fly” read more like a snowboard magazine. I can’t even follow what the hell they are writing about.

A sporting tradition by definition is about restraint, appreciation, and a fair game between you and your sporting quarry.

By adapting fly fishing through application of new technology, we can catch fish where we could not catch them before. Deep runs are conquered with application of deep sinking tips such as T-14, or the addition of split-shot and bobbers. Increasingly powerful graphite rods allow us to cast much farther, and may diminish our ability to stalk and read water. Is this a good thing? Is this evolution natural? I don’t know…

Vast new ranges of rods and lines available guarantee that many of us seem to spend most of the time obsessing with our gear instead of exploring new water, or just being happy to be out there. Some anglers think they can’t catch a ten-inch stocker rainbow without a super fast action $700.00 rod and matching high tech. Large-arbor disk drag reel.

One thing that seems to be lacking in the new generation of “Thrash” fly fishermen is a proper foundation in the sport. As I have written before in this blog, I divide angling into four stages: Desire to catch a fish, desire to catch the most fish, desire to catch the biggest fish, and finally the appreciation to just go fishing. Much of what I read from many online boards and magazines seems to indicate that increasingly the new wave of anglers out there entered fly fishing at stage two or three, and will forever be stuck there. Stage one is the all-important step. Learning by being skunked. Learning to read water, learning to appreciate nature. Learning to make gear a non-issue when on the water. Reading and learning that the things you have learned were also discovered by anglers in the past. The whole process of becoming a fly fishermen is key here. It is a long and winding road and really should not be hurried or cut short. Entering the angler’s progression in the middle with gear that allows one to cast and fish every run like never before without really knowing why or what one is doing is like running before learning how to walk. You may be able to run really fast, but because you never learned how to stop, stand, or walk, your journey will inevitably end when you fall on your ass. Without the proper foundation (which is disdained) when the adrenaline is gone or the envelope pushed to its limit, these anglers will have nothing to fall back on, and will move on to the next cool and popular extreme sport.

Another casualty seems to be courtesy. When one wants to own the river stretch and catch every fish, hang out with their buddies that look, dress, and talk like they do, and scorn anything different, then the mind begins to close. A closed mind and lack of foundation lead to a lack of courtesy. It amazes me how many times I cannot get the ‘time of day’ from someone in the river. We all seem to guard ‘our territory’ like so many adolescent baboons. The people who I do have good conversations with inevitably are open minded and courteous. They do not low-hole other anglers, hog runs, make fun of others, etc. There is mutual respect for the river, the fish, and other anglers. Respect. Giving and not selfish.

I don’t have the answers, but perhaps I can spur some thinking…
Posted by Erik Helm at 12:23 PM