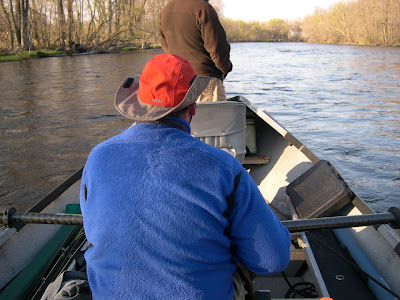 Why in these days and times we need to be more than just fishermen. The waters and the fish make the experience of fly fishing what it is. Without them, it would be just a bunch of us using expensive gear to chase hatchery drones.

"We have reached a time in the life of the planet,and humanity's demands upon it, when every fisherman will have to be a riverkeeper, a steward of marine shallows, a watchman on the high seas. We are beyond having to put back what we have taken out. We must put back more than we take out.We must make holy war on the enemies of aquatic life as we have upon gillnetters, polluters, and drainers of wetlands. Otherwise, as you have already learned, these creatures will continue to disappear at an accelerating rate. We will lose as much as we have lost already and there will be next to nothing, remnant populations, put-and-take, dim bulbs following the tank truck."

Thomas McGuane
Posted by Erik Helm at 1:08 PM No comments: 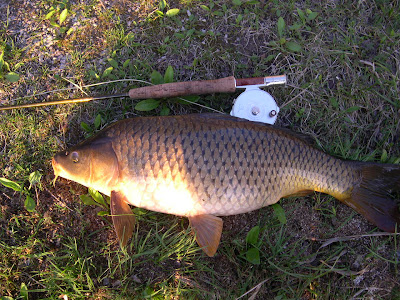 On a whim I explored an area lake in the pursuit of panfish. This lake does not allow motors on boats so it would in theory also reduce the amount of motorheads on the lake fishing, and give me some peace. I caught a few panfish and two largemouth bass, but the water was a little cold yet for the best action. After five hours I ended up at a dark bay at the end of the lake which the wind was blowing into. There were large fish jumping and rolling, but I could not tell if they were largemouth bass on a feeding binge or what. I made repeated long casts into the dark water and finally hooked one. It ran and broke me off quite easily. These were not bass, they were carp. Big carp ready to spawn and on a feeding frenzy. I knew I had found what I always wanted- a carp on the fly. However, since I was going for panfish, I had a 8'6" 5 wt with a Hardy Bougle' reel (click and pawl drag). I was totally under-gunned. After breaking off two more fish, I cut my leader back from 10 feet to around 6 feet, tied on a size twelve crystal hackle soft hackle streamer, and bombed out a cast. Strip...strip...pause...strip...THUD. Boom, fish on. I hoped I wasn't foul hooking these fish, but when I was able to carefully raise the fishes head after about five minutes of screaming reel and careful line management, there was my fly in the corner of its mouth. My first carp on the fly! Around 12 pounds of Midwestern golden bonefish lay on the bank for a quick photo.

I came back the next day to try to repeat the same process, this time with appropriate gear. After an afternoon of finding panfish on the beds, I made my way to the bay, and on the third or fourth cast in, hooked the first fish on a new carp fly I had tied that day. The fish dove, and the fly popped out. Crap. I checked my hook, made another cast, and heard a trolling motor near to my left. Sure as heck, there was a boat heading right into the area I was casting. They anchored directly on the spot I was casting to, and proceeded to cast their bobbers over my line. WTF! I tried to make conversation, but they knew what they were doing, and just were going to fish their spot, regardless if I was casting into it or moving forward into it. The occupants of the boat were the perfect specimens of the Midwest goober-schlub-goons. The guy was about 300 pounds and dressed in camo. Perhaps he thought the fish couldn't see him. The wife looked like a troll and smoked a cigar. While I pondered my chances another boat parked slightly behind the first and hemmed me in even further. As I told my friend Dave D., the experience reinforced my rather misanthropic side.

But at least I had pulled another hat trick, and added another species to the long rod. On a click and pawl reel to boot!
Posted by Erik Helm at 2:18 PM 1 comment: 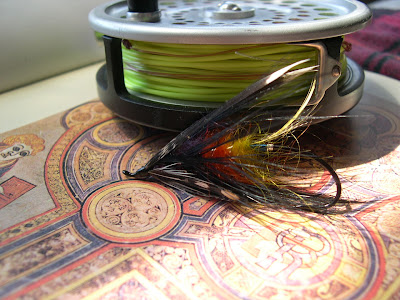 I finally found some white wing turkey feathers in matched pairs and put them to good use.
Here is a 3/0 Dunt Dee fly. Should look good stuck in a tree in the Bone Yard run... which is why I don't fish these in our river.

I will be conducting a casting clinic at Greenfield Park in West Allis on Tuesday May 12th @ 5:00 pm for the Milwaukee Lake and Stream Fly Fishers club. Everyone is invited to come and join the club in tuning your fly casting. The more the merrier. You might be in for a treat, and watch me throw tailing loops! ;)
Posted by Erik Helm at 11:58 AM 2 comments: