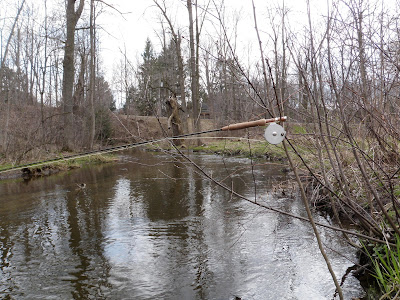 No, not that kind.

The other day, when giving a seminar on dry fly fishing, I was taking questions, and attempting, poorly as it was, to describe a feeling I sometimes get when on the stream that comes deep from the river or my soul that whispers “There, put your fly there.”

I had to close my eyes and pause for a moment to see in my mind’s eye the symbiosis of water knowledge and feeling which leads the fly angler to that simple confidence of ‘just knowing.’

The spring creek bubbled, projected on the back of my closed eyes, and I saw not the water, but the spaces in-between. Not the obvious riffle, but the soft spot just past the protruding stick.

This little spring creek had beaten up on me so many times that I started doubting my own quixotic self-torture at fishing it at all. I would place my fly where I knew in my mind that there would be a fish, but my sense of feeling was seldom rewarded. Was it the creek? Was it me? What was I doing wrong?

What this one special day portended was a glorious proof-positive that indeed, where I thought there should be a brown trout lurking, there would be.

There were no hatches to speak of. The sky was cloudy, but no more than other days. Thinking back, I could not put my finger on what was different that day, but it was different, very different. As I made my up the pools and leapfrogged the riffles, I stubbornly used my little 7’ rod to place a caddis dry with precision in areas I had cast to a hundred times before with little or no success. Sometimes things actually do go right in fly-fishing. These days are the ones you hear about in stories and tales. Let me be the first to admit that for every tale of heroism and leaping trout, there are ten untold tales of defeat, frustration and humility, but not that day.

The first cast brought up a beautiful 10” brown who ate the caddis with sloppy abandon. The second cast went to the opposite side of the riffle against a root ball. A 12” brown sipped the fly in. For the rest of the afternoon the trout played out a concerto of affirmation, as everywhere I placed my fly, where previously there was an unanswered offering, now there were fish intoxicated with life and vitality. Like late-night diners at the last-chance café’, they ate whatever was placed before them. Upside down caddis, easy over caddis, caddis with gravy, blue-light special caddis, caddis with meatballs: it just didn’t matter.

The next week, in the same conditions on the same creek, I met with mixed results. The fish were not as glad-happy and reckless, but I found them in the same places. My mistrusted instinct had proved right all along.

This was what I was trying to put into words that day at the seminar. Sometimes, we just have to trust. Trust that after all the hours reading water, and saying to ourselves, “There just has to be a fish in that corner pocket,” that there is. We just have to trust. We have to have faith in our instincts. If we pass the spot up, we will never know…

Every year I fish slower and slower, and it has nothing to do with age. It has to do with thinking, with sitting and observing, and then trusting. The creek still beats up on me from time to time, but as I catch its rhythms and place myself in harmony, with no pressure to catch a fish. It rewards me. All it took was a little faith.
Posted by Erik Helm at 11:47 AM 2 comments: