The joy of the cane fly rod


This past fall I acquired my first fly rod built of split cane. A 6’6” two-piece for a 4wt line. The model is a Redwing ‘Precise’ hand built by master craftsman Joe Balestrieri. Mr. Balestrieri is a true gentleman of many years acquaintance, and has been hinting and whispering to me of the possibilities inherent in bamboo for years. 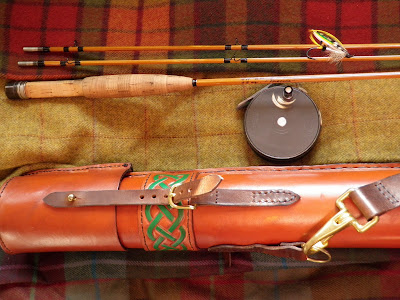 He has a rather unique philosophy, namely that to follow the old master’s taper designs is like trying to recreate the Mona Lisa, and instead, by designing his own tapers, he finds discoveries that prove that the best cane rod is yet to be built.


Let me digress for a moment…

Having been involved in the fly-fishing ‘Industry’ for quite awhile now, I have seen, wiggled, cast, and fiddled with literally hundreds of split-cane rods. It is a weekly occurrence to have a customer come into the shop with an old stained rod sock and pull out a cane rod for evaluation. Many want to fish a legacy, as it used to belong to Grandpa, or they found it at a rummage sale for a song and now want it matched to a reel and line. Of the rods I have handled, 99% are rather awful. The reason why is simple.

Back in the days before the fiberglass and graphite revolution swept over the fly-fishing world, all rods were made of cane; the vast majority being mass-production rods. Yes, they were hand-crafted to an extent, but not by masters, instead, the were planed, glued, baked, and wrapped by the assembly-line process. They were heavy and not finely tapered and tuned. The analogy I like to use is a simple one when explaining this to students and customers: “Saying that you have a bamboo fly-rod is like saying that you have a metal car. All rods were built of cane, as all cars were made of metal. The differences between a utilitarian Ford, and a Ferrari are the same when comparing a South Bend from a local hardware store to a finely crafted Payne or Garrison.”

This is why cane rods have a bad reputation in modern days to the occasional angler. The run-of-the-mill rod is clunky, poorly tapered, heavy, and collapses on the cast when any distance is desired. Graphite is lighter, crisper, and recovers faster. Holders of this opinion are to be forgiven because they never have had the pleasure of casting a cane rod that is a true work of art. 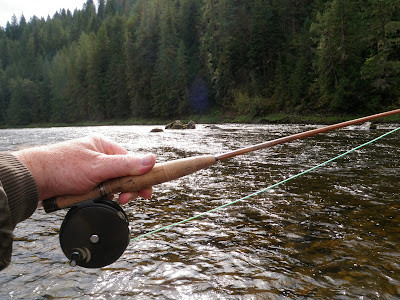 The possibilities of cane opened up to me one evening when I paid a visit to Joe and his workshop. Always the gentleman, I was soon comfortably seated with a glass of Sicilian wine in my hand, and examining a restoration project Joe was undertaking on a short spey rod owned by some obscure Viscount in Great Britain. Balestrieri then pulled out a big 9 ft. 8 wt rod, and handed it to me to flex. Now I can be rather stubborn, and set in my opinions, but am wise and quick enough to recognize when my self-imposed blinders have been lifted off and the light of day revealed. What I held in my hand was an epiphany. It was as light as most graphite rods, with a fine parabolic taper and quick recovery. Unlike production rods of any material, no two handcrafted cane rods are precisely alike. The finish varies just a little, and the grain and knurls in the wood seats add a unique touch.


I sat speechless as Joe stood forth on the infinite possibilities of taper design. Perhaps it was the wine, but I could almost hear and smell the flowing water just beyond the tip of the rod.

Flexing it was like a finely tuned musical instrument with its own unique character not unlike a fine violin, both with inherent musical (casting) personalities and aesthetic charms. It had a presence not unlike a fine work of art. I was blown away. I left that evening after sampling a StrathSpey Single-Malt Scotch, and was a changed man.

That was a few years back. Now I regret the time in-between when I could have played the small streams of Wisconsin for bejeweled trout with an instrument that turned mere fly-fishing into a concerto for wood, water, and speckled wild quarry worthy of Mozart.

The first initial cast of the Redwing ‘Precise’ knocked me out. It felt like graphite, but yet not. It had power to spare, a sweet action that somehow seemed designed just for my stroke, it was beautiful, and it was the most accurate fly rod I had ever cast. I fell in love.

The initial outing with the rod was at the end of trout season on my local creek, which was totally brush choked. I fished with hopper patterns and baptized the rod with a lone 9” wild brown. Playing the fish with the flexible action of the rod was like listening to a symphony in stereo rather than mono: the experience just became more intimate. The short rod made negotiating the small spring creek much easier too, and the fly landed with the precision intended by Balestrieri’s artful hands. The pairing of an old 1950s Hardy Perfect 3 1/8” reel and a DT line made the rod come alive. It balanced like a dream. It disappeared in my hand as my casts just landed like I ‘thought them’ into place.

Laying awake one night before my annual trip to Idaho to fish for steelhead, I had an idea. Why not drive the extra fifty miles or so and spend the first day of two on the Selway River fishing wild cutthroat trout? Why not take the new cane rod? Why not have the proper experiences of sporting-restraint fishing dries with a tiny cane rod on a big western river? 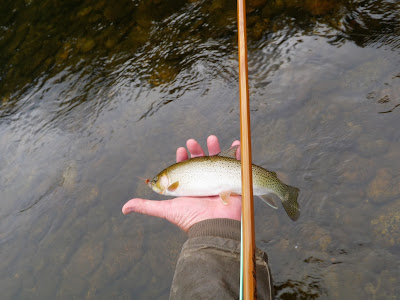 That is just what I did. Yes, the little rod was limiting in some ways. I could comfortably put out 40 feet of line, and reach out to 55 feet or so when necessary, but it necessitated the stalking of some water, a cautious approach, and more thinking than casting, which is another of Joe Balestrieri’s little opinions. He believes that super powerful rods have limited the joy of skill and the hunt that the older more sympathetic cane rods made necessary. The thought, reflection, and the studying of the stream became with the new plastic rods, an art all but forgotten. 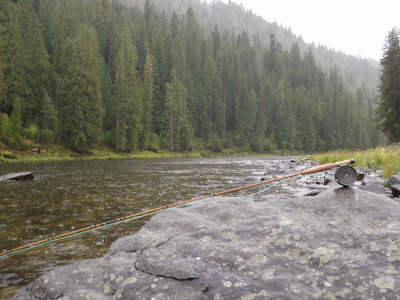 So I raise a glass of fine claret in salute to Joe Balestrieri the artist and craftsman, the rod he built for me, the joy of fishing with it, the feeling of a delightful coming together or symbiosis of aesthetics, power, and restraint: a tool worthy of the fish we pursue in beautiful places, and a rod that elevates the fly-fishing experience from the near mundane to the moving feelings of high-art. 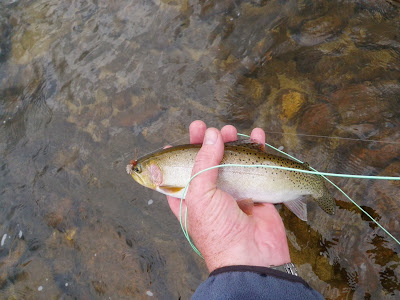