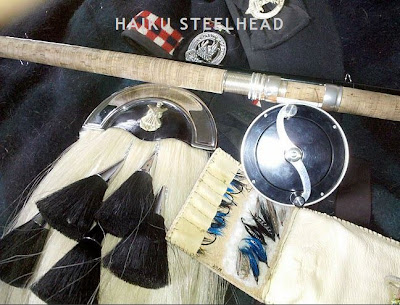 My friend Ken Campbell has revived his blog 'Haiku Steelhead'.
Ken is an artist in his appreciation for those things sublime and beautiful, and is one of a small brotherhood of those of us that attempt to find a deeper meaning in our fly-fishing adventures. Please check it out here.
Posted by Erik Helm at 9:55 AM 1 comment:

The wonderful aerial ballet of frustration: The single spey cast.

It reminds me of a Chinese gymnast with a long red scarf dancing through the air painting fleeting pictures and creating beautiful forms like a Picasso sparkler drawing on a long exposure film. It is at once the most perfect of all casts, with the power of a double-haul and the grace of a ballet dancer. Performed perfectly, it is grace.

But, dear reader, the single spey is a fickle friend. Forgive me for the analogy, but is like some girls I dated in my college days: so beautiful and interesting that you kept coming back, even if she messed up your head to no end.

The single spey is a delicate flower as well. That perfect loop is only attainable through precise timing and cast structure. Do it wrong, and it lets you know right away.

This is why I am drawn to the art of the single-spey like a moth to a flame; no matter how many times it burns me, I always come back for more.

The funny thing is that the single-spey is the one cast that goes off for me over the winter, or when not practicing. The double-spey, poke, snap-T, snake-roll, reverse casts, etc. all fly out, but the single-spey lets me know when I am not paying it enough attention.

The single-spey even haunts my dreams at night.

One of the major problems I have with this cast is over-analysis and too many sources for input. After watching a video or reading an article, I will change something and get a positive result, which then goes awry the next day. Then I watch a different video, and make another change…
The result this early spring was like a bunch of unrelated spare parts welded together to form something that didn’t work, and looked ugly.

So, learning from my past mistakes, I started from scratch, and concentrated on basics again. Slow lift angling to the casting direction, an ever-so-slight dip created by the underhand, a rising flat sweep and turn, pause, and stop.

I then realized that I had been making basic errors for the last seven years at least.
My anchor landed piled due to an up and down dip thanks to one video. My upper-hand was over-dominant. I had to begin the use of the underhand at the beginning of the cast, and maintain it throughout in order to form a large enough D-loop. I also lacked, and still lack body twist, and I over-compensate for that. I stop too low, and fire my casts too low. Etc.

Funny thing is, with a shorter head and sustained-anchor casts, these problems correct themselves, and faults are not as easily noticed, but add a mid-belly or DT line, and watch out! Now all the errors get multiplied to create frustrating and seemingly unsolvable problems.

So, to make a long story short, I will be down by the river when the winds are not blowing at 30 mph, and trying to re-discover beauty in the simplest but most difficult cast of them all.
Posted by Erik Helm at 1:46 PM 2 comments:

From time to time I run into people who tell me all about how they out-fished a buddy, or how they caught more fish than ‘fill in the blank’.

I guess competition is inherent in human nature. After all, it tends to be how we measure ourselves, and our abilities and success. However, ideally, competition should not enter into the little games we play on lakes and streams with our cherished quarry.

Competition should be something that occurs naturally within our own heads. It should have to do with bettering ourselves, learning, casting more precise, or presenting better. It should be an internal challenge to read the water better, choose the proper fly, or adapt to conditions. It never should be something that occurs between yourself and other anglers. That is a perversion of the spirit of angling with a fly.

This is a difficult path to walk. All it takes for us to get side-tracked is to observe another angler catching fish behind us, or figuring out a difficult hatch or fish in a particularly nasty lie, and then we want to catch more and bigger fish than they did.

I have some wisdom to share here. No matter how good you are, how many fish you catch, how far or how accurate you cast, there will always be someone better, usually just around the next bend.

So, the only way not to drive yourself crazy and end up in a straight-jacket mumbling incoherently about the impending cucumber revolution, is to limit the competition to yourself.

Satisfaction should be measured in baby steps, not great strides. Finally raising that big brown that lives under the alders in the bridge pool with a half-reverse slack line reach cast should matter far more than actually hooking it. This kind of personal growth should be celebrated.

With each step we take as anglers on our personal journey and path, we should grow in wisdom as well as skill.

If fly-fishing becomes a true competitive sport, at least we may want to avoid the NASCAR crossover look…
Posted by Erik Helm at 10:55 AM 2 comments:

Those of you who are local and have enjoyed reading some of my rather enigmatic wandering prose and thoughts will be able to visit me at the Milwaukee Orvis store at the Bayshore Mall. I will be the fishing manager, and responsible for outreach and everything outdoors or fly-fishing related. That includes classes, seminars, etc. Perhaps a reading of a short story...

Being employed full-time and running a business on the side will no doubt leave me with less time for blogging and writing, but I hope that quality instead of quantity will suffice for the future. Meanwhile, I have submitted an entry to the Robert Traver fly-fishing writing award from Fly Rod and Reel magazine. Wish me luck! I hope “Hop on Pop” is not already entered…
Posted by Erik Helm at 2:50 PM 5 comments:

Email ThisBlogThis!Share to TwitterShare to FacebookShare to Pinterest
Labels: Orvis