Happy Fathers Day to all Dads! 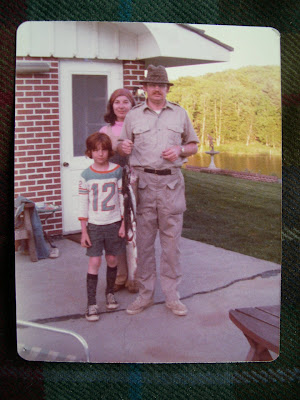 Most anglers and fly fishermen in particular have had the tradition of this great sport handed down to them by their fathers. My friend Rob’s father tells a neat story about fly fishing in Michigan when Rob who was all of eight or nine years old was perched on a rock casting, and Sylvester Nemes came past and remarked that the kids casting skill was better than his fathers.

Many of us cherish those memories of our fathers, from the first time we were shown how to bait a hook and cast, to the time we finally caught a fish bigger than Dad’s was, and the look not of envy but of pride on his face.

My memories are just as fond, but in a more ironic way.

My father loved to dream about fishing, but rarely fished. He taught me how to bait a hook with a worm, set the bobber and catch panfish. He taught me to clean the fish. He also taught me that he was not to be bothered for the morning bite. I fished alone in the mornings, as Dad would never get out of bed. Dad and I only really fished on vacations. These were supposed to be the time when mom could get away from her soul crushing job, and immerse herself in nature and paint and sketch while staying with friends ‘up north’. For Dad, these vacations took on a safari like expedition status.

The vacation planning would begin with my mother securing time off of work. After the dates were set, Dad would begin assembling the baggage train near the doorway of our house. Like everything else involving Dad, this took time; in this case weeks, with long speculation and daydreaming while smoking his pipe, and was over-meticulously planned. He gathered: hunting boots, hiking boots, casual shoes, two fishing rod cases containing a dozen of his hand built rods, two tackle boxes, a large box of fishing reels, two safari jackets, several hats including a pith helmet, several large fishing nets, four duffel bags of clothing, etc. Enough gear for an expedition to the Congo. My mother took some watercolor supplies and a change of clothes. I had one fishing rod and a small duffel bag.

That was Dad. Everything was overdone, over planned, analyzed to death, and had to be perfect.
He hand built spinning rods that were pieces of artwork, with gun stock French walnut inserts, elaborately wrapped guides, and guide spacing that was based upon complex mathematical models only known to him. He owned the best reels that money could buy, and a large collection of lures and sundry equipment. Despite this, he very seldom fished. When we did fish together, after I was about nine or so, the fishing sessions were inevitably memorable…but in the wrong way.

I couldn’t wait to go fishing the first morning of the vacation, but had to wait for Dad, as the fishing rods were locked in the car. On the pond was a boathouse with a pier from which we would fish. We stood on the little pier and cast spinners to the trout. I caught my first rainbow trout that day. Before that occurred though, there were the requisite disasters that seemed to follow us wherever we went. On an errant cast, I hooked Dad in the leg, the treble hooks embedding deep in his pants. It’s amazing that worse didn’t occur with the two of us crowded onto the tiny end of the pier. In order to get the hooks out he had to take off his pants. We stood on the end of the platform while I tried to free the hooks from his trousers, which were now around his ankles. I used needle-nose pliers and finally got the hooks free but left a sizable hole in the pants. By this time, both of us were entangled in the fishing line, and I dropped his pliers into the water. I was never to hear the end of this. The proximity of sharp objects, Dad’s anxieties, and a small boy crowded onto a pier had reached critical mass. At times like this, I was at the mercy of his entire wrath, as Mom wasn’t there to try to interfere and thus get criticized for always “Defending the boy.” On a positive note, I learned a lot of new words that day.

Several days later I went along on a shopping expedition with Mom and her friend and Dad was left alone to fish. When we returned, he proudly showed off a stringer of five beautiful rainbow trout. One of them was the biggest I had ever seen up to that point. It was almost hard to believe. Dad seemed such a fumble-klutz at fishing that it was an entirely new feeling to see him as a hero.

My father loved to fish. At least he loved to dream about fishing and collect tackle. He rarely actually went fishing. He read books on spin fishing, and purchased or hand built the best equipment with God only knows what money. Somehow though, in his meticulous study, he missed some of the simple fundamentals. When fishing with a spinning reel one opens the bail (control arm) thus freeing the line for a cast. In order to prevent the line from free spooling at this point and creating a tangled mess, one places a finger on the line and traps it against the rod or reel. Dad overlooked this. On a later vacation to Wisconsin’s Door County, we were fishing together and Dad repeatedly made casts that went nowhere and created a bird nest of line. At these times I was employed to help by holding either the rod or the line while he cursed and blamed, constantly stating “ I am going crazy” and sweating profusely. The tangles kept getting worse until they covered the reel, rod, and us. Monofilament was everywhere. Everyone took turns trying to help him, but it was to no avail. My Uncle Jerry, a Benedictine priest, and our driver on this trip even had his patience tried. He went swimming to escape the mayhem. Mom tried to help too, but finally went off alone to paint. The rod ended up getting broken, probably on purpose. I can still feel the tension in the air, and smell the frustration and terror sweat as it fell from Dad's brow.
It’s funny. I loved to fish too, but after these vacations, I never fished from age 15 until I was in my mid-30s. I often wonder if the traumatic imprints had something to do with that.

Dad’s hand built rods may have been works of art, but they hardly ever received use, even given our proximity to Lake Michigan. Dad’s fears and anxieties all but prevented him from ever venturing out on his own. Instead he amassed tackle and sat day dreaming about it until vacation time came along. He collected hundreds of back-copies of Outdoor Life and Field and Stream, but hated to leave the house for fear of getting his shoes muddy, getting wet, or getting eaten by mosquitoes. My mom and I thought he should have magazines entitled “Indoor Life” instead. When he did venture outside into nature, he dressed like someone attempting a parody of an English explorer from the 19th century. He would don special boots, safari jackets, and a pith helmet.

So, here’s to you Dad, in a loving but tongue in cheek way. Happy Fathers Day. Wish you were still here with me, disasters and all. I will wear your Irish hats in tribute, but will try not to tangle the line around myself and fall in.
Posted by Erik Helm at 10:20 PM 1 comment: