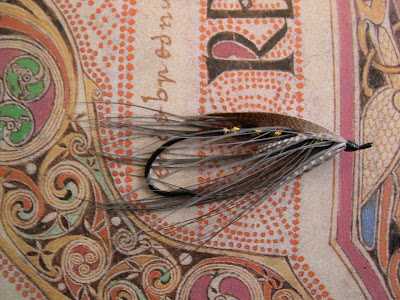 With the recent explosion in popularity of two handed or ‘Spey’ rods, I have noticed the tendency to refer to pretty much any fly that is not a tube or intruder as a “Spey fly”. Spey flies are very distinct and have the following characteristics:

1. A body of wool or fur wound thin and tight to the shank of the hook.
2. Following tinsel as body ribbing. Usually thicker diameter. Often followed or counter wound with narrow oval tinsel.
3. Little or no tail.
4. Hackle that extends back past the rear of the hook, and is tied in either at the rear or at some point in the body and wound forward; or tied in front, wound to the rear and locked in with tinsel. The hackle should follow the flat tinsel and be tied in directly behind it to protect the delicate stem.
5. A wing of Bronze mallard tied in as slips to form a keel-less boat low over the fly. Wing can be tied in straight or reversed.

That’s it. See the above photo of my Gold Heron Spey as an example.

Most of what I see referred to as ‘Spey flies’ are actually flies that have one or more of the above characteristics, but not all. Thus, they are not Spey flies. I would characterize them as ‘Modern Spey-like flies”. Take a ‘Marabou-Spey’ for example. The only characteristic that it shares with its Scottish cousin is the length of the hackle. We can use marabou as a hackle feather in traditional Speys, but then it must be tied in properly.

Producing variations in style is important to the development of flies, but one must acknowledge that they are variants. For example, My variation on Dee styling in a fishing fly by using hackle wound at the head, hair and mallard wings, and lacking jungle-cock certainly leaves us with a fly that is reminiscent of a Dee fly, but is not a Dee fly per se. If we use hair in the wing it is a hair-wing, not a Dee.

They are not easy to tie. Getting the hackle wound in correctly, setting the wings, and forming the head will take practice. My first Spey flies show all the classic mistakes, and it was three years before I tied one even remotely right.

If anyone is interested in tying them, the excellent books by Veverka and Shewey can serve as guides. Use gray marabou stripped on one side to practice with so you don’t burn through blue ear pheasant.
Posted by Erik Helm at 12:23 PM