The pure joy of the unpretentious panfish 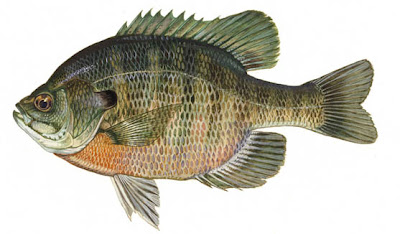 This last year I rediscovered the pure joy of fishing for sunfish. I had forgotten them or moved passed them in order to pursue more 'mature and intellectual' targets such as trout. In coming back to these colorful little fish, I rediscovered the innocent and uncomplicated fishing I enjoyed as a youth. It was if I had stepped into a time machine. I found again a world of pleasure before pretensions; before we wondered if we could name drop enough Latin entomology to fit in at the local fly fishing club; a time before we wondered which wine complimented a certain flyline; a time before ego, and before seriousness petrified our laughter. It was and is again, an un-pressured fishing, where you may catch three dozen fish or only a dozen, and not give a damn either way. I didn’t really care how big they were, because they were all so eager to eat pretty much anything that I threw to them and hook themselves, that I was too busy having fun landing fish to even think about it.

The little fish have character. They never stop fighting with their tiny spunk and energy. It makes you giggle.

One thing that became apparent as I floated around area lakes and ponds, was the absolutely deadliness of fly fishing as a technique to catch panfish. Again and again, I passed people fishing with sunk worms and bobbers, and picked up fish left and right of them. I began to feel kind of guilty. The little fish displayed so much eagerness for my foam bugs that several would come out of the water and dive down onto the bug to take it from above. It was sort of like teasing a kitten with a ball of yarn or a piece of string. I could cast to shore and let my fly sit still for a half a minute, then twitch it a bit and watch the water literally boil as the fish competed with each other to get to it first.

Unlimited fun. Such spunk.
A heck of a way to spend an afternoon.
Posted by Erik Helm at 4:37 PM