Hepped up on goofballs 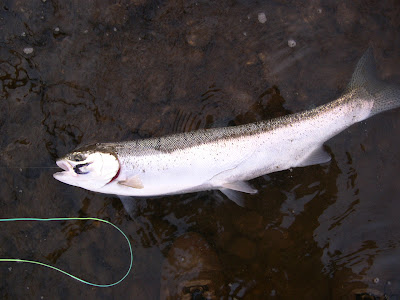 Something strange happened last week... which is why I have been lax on the writing front. I have been in the river every day chasing phantoms. The normally dour spring steelhead that usually give a short run and a half hearted jump suddenly and without warning were replaced by steelhead from a Lani Waller video. I got a call last Friday when I was not fishing due to shoulder pain ( darn wind) that something was up. Dave P. got into a half dozen fish in a single run that Rob E. and I had fished the evening before and received nary a pull. The fish that Dave hooked were like 'Morice river crazys', and went leaping down the river. One fish jumped seven times!

Saturday morning we convened the full platoon strength of SCUM (steelhead catchers underground militia) and headed to the river for a full 13 hour day. It was like fishing British Columbia. When we arrived at the river in the morning something felt, smelled, and looked different. I told Joe S. that it seemed like I was on the Klickitat. Even the rocks looked different. The entire day Cory T., Joe S. Dave P, Brian K, and I got into fish. The tales are too numerous to tell. Cory got top billing. Joe S. kept pulling bright fish out of the same pool each time through. Every fish was brighter than the last. I got hit by the devil fish; a hen larger than we have seen this spring which ripped out the loop of line, and was instantly airborne and tail walking. She jumped over the largest boulder in the river. I was in total shock. We landed her and pictures were taken which when I receive them will be posted here. In all my years chasing steelhead in the Midwest and PNW this fish was among the hottest. It was completely out of control.

We retired afterwards to Chinese food and sleep. Exhausted from fighting fish that should not exist, we spent several hours the next evening trying to figure out what had happened, for by Sunday, the fish were gone.
Joe S. Dave P. and I figured it out. None of the fish had fin clips, and they fought, behaved, and looked like skamania. They were chrome bright and no where near spawning. Then I hooked and landed and photographed this hen as proof. It had jumped seven times in succession. They were skamania. Running in the spring when the water was the perfect height and temperature, instead of in summer when they are supposed to run, their presence gave us steelhead valhalla for a short time. These fish were hepped up on goofballs. In 2007 the DNR planted smolts and fingerlings that never were fin clipped. The skamania program has now been discontinued. These fish were perhaps the last skamania steelhead this river would ever see. What a way to go out!
Posted by Erik Helm at 11:08 AM