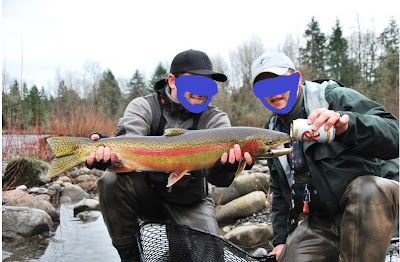 Some readers of the Classical Angler may wonder from time to time why I seem to get my knickers all bunched up over what I perceive as an attitude problem among many of today's steelhead "Hot Sticks."

Here is a photo that will say it all. I am not going to say who it is, nor where it came from and have blacked out the faces, but even if it is a hatchery fish, it not only shows disrespect, but almost displays a kind of psychosis.

Pouring beer into a steelhead's mouth is beyond silly. It is childish. Childish behavior and unsporting. Especially as this was the 'last rights' before killing the fish. 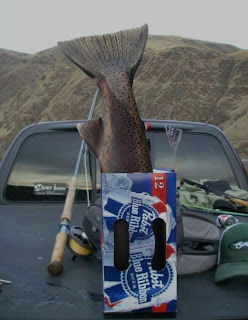 And another from a different site. Yes, they are only hatchery fish, but should they be treated like this, much less photographed and posted on the web as if it were a badge of coolness?

Editors note: 1/21/10 - O.K. Boys, I think that is about enough for now. The guilty parties are aware that I called them out. Enough of a nest of hornets.
I have a few last thoughts before we put this to bed.
First, how all of us behave reflects on the sport as a whole. That goes for me as well as you. This was not a matter of a hatchery fish and whether or not to dispatch it. Far from it. To me, it simply showed a lack of respect for life, for our fellow creatures, other anglers, and displayed a maturity level on par with the denizens of a video arcade.
My hope is that I made people think. That is and has always been my goal in my writing. Perhaps we might take a moment and think before we post our latest exploits and conquests on facebrag. The world is watching, and I am on the same team as you are. PETA is not.
Secondly, it is interesting that with the variety of writing that I place on this little corner of the blogosphere, that controversy gets the most attention. If I had one wish, it would be that I could share humor and inspiration as successfully.
Erik Helm
Posted by Erik Helm at 12:02 PM