When the trout stream met the sky, and all became water 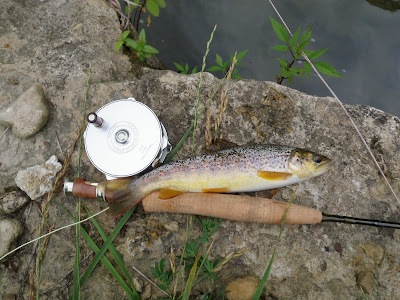 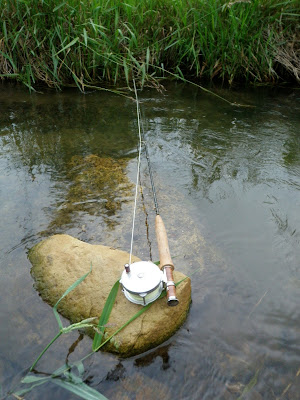 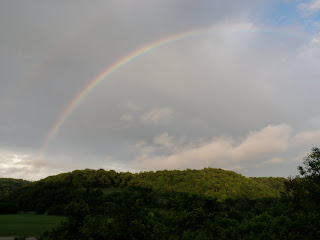 Everyone loves a good storm. Sitting back with a hot cup of tea and smelling the rain as it renews the land, or feeling the approach of a dark cloud in your bones, the unending rumble of thunder filling you with anticipation as the first tentative drops of rain begin to fall.

A really good Midwest thunderstorm can force even the most stalwart farmer to pull his cap down. Storms here reach biblical proportions at times. It is in the month of June that temperatures and humidity levels rise enough to prime the air with a stagnant and heavy load. Steamy air laden with moisture boils up from the gulf and meets the cool jet stream. The resulting storms go spinning off to the east like miniature hurricanes. The dark cumulonimbus anvil clouds expand and rise quickly high into the atmosphere, and the bottoms boil. The entire sky turns a sickly green color.

I knew when I left my home that it would be stormy, but one takes free time as it comes to one. Days off are not to be squandered. So, I raced the coming storm front to the driftless country of south-west Wisconsin and it’s spectacular spring creeks. Four hours later the tent was set up and secured, and I was playing the first little wild brown trout on my new seven foot four weight superfine. The sun began to be eclipsed by little puffy cloud-sentries, and the fishing started to improve. For the next three hours without a hatch, I had spectacular dry-fly fishing. All I needed was an elk-hair caddis in a size 14. Splat it down gently around a bend or far enough ahead and it died a gallant death a hundred times as it was ravaged by trout. I actually felt sorry for the poor fly as its hackle got torn off and its wing lay in tatters. I imagined it looking at me, begging “Enough, PLEASE! Enough already! Don’t throw me out there again. This is murder!”

The cloud sentries by now had spotted me and reported back to the gathering storm regiments. “Trout angler, due east,” they rumbled. As the sky grew ominously darker and rain drops began to fall intermittently, the fishing just got better and better. It is said that trout, and fish in general, feed heavily before a storm, and although I had experienced this before, it was never on a spring creek where it could be perceived so obviously. It was as if someone turned on a switch or rang a dinner bell. The problem was that the fish were so eager, that I had a hard time getting casts to where I wanted them, as the fly kept being eaten before it got there. As the air became thicker and thicker and breathing harder, the trout began to jump again and again. I had to do a double take. Were they trying to escape the creek by swimming in the air?

I was experiencing the best non-hatch dry-fly fishing I had ever seen. As the trout leapt, I giggled. “Off that blade of grass…. Fish on!” “Against that rip-rap… Fish on!” “Wheeeeee!”

It was then at that moment of trout epiphany that the first lightning began to flash. Now wandering around standing in water holding a seven-foot lightning rod and waving it overhead during a thunderstorm is not a good idea. I should have left and headed back to the car. Instead, I fished on, the trout now jumping on the end of my line into the falling rain.

Finally, I felt that I had pushed it far enough and wound in, put on my rain jacket and tromped off. The creek I was fishing runs against the bottom of a ridgeline of a coulee hill. That prevented me from actually viewing the storm as it approached. The first inkling that I got that this storm was a force of nature, an elemental power of water, thunder, and wind was when it came over the ridge. I was twenty feet from my car when a downdraft of wind twenty degrees cooler than the humid 90-degree air of the valley nearly knocked me to the ground. I was then assaulted by a horizontal rain. Each drop was like a projectile. It actually hurt. The sky became water, and I could no longer see at all. Then the lightning struck repeatedly and close. I threw my rod into some nearby bushes and squatted down in the classic duck and cover position, water streaming off my hood and hands like faucets. Water began to trickle and rise around my feet. I thought I glimpsed Noah in the distance sawing wood for his ark.

It lasted fifteen minutes. In fifteen minutes more than an inch and a half of rain fell. As I got back to the car and drove off to see if Mr. Tent had survived, I saw the creek I had just fished. Where it turned back into the wooded ridge and increased in gradient, it was a muddy torrent pushing rocks and boulders before it. Further down the road the storm dropped the first of its five tornadoes.

I guess the thing that struck me was that I was not disappointed. Two and a half days of trout fishing had turned into three hours, but experiencing that storm, and being made to feel helpless in the face of nature was an experience in itself to be treasured…. Once. Next time I will just pull into some rural bar, order a tap beer from Stash or Erma, and say “Ya, how’s about them Packers?”
Posted by Erik Helm at 10:37 AM