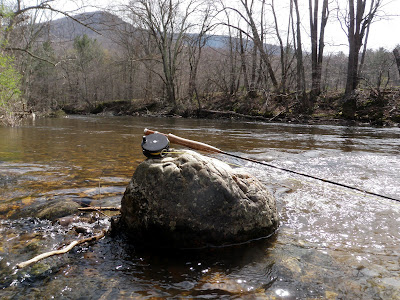 It is a river of legends. Flowing from Vermont’s Green Mountains and into New York, it trickles and meanders through history and our fly-fishing souls. Its valley is gentle and serene, and its hatches of mayflies and caddis and tricky trout underlay much of what makes eastern American trout fishing what it is.

All this flowed and eddied through my brain as we Orvis fishing managers set out for an afternoon and evening of fishing this storied river on an unseasonably warm day in April 2012. The strange warm spring had seen the high runoff water blow through early this year, and the river was low and clear.

It is difficult to pin down the emotions and thoughts as we separated and rigged up our rods and lines, chose flies, and donned waders. I guess the closest I can come is that I felt a part of history. I thought of Art Flick, Theodore Gordon, and other Eastern greats.

Our party of five, (Dan, Shannon, George, Trent, and myself) were one group of a total of over 40 skilled and trout-obsessed fly-fishermen and women that would test their skills on the waters that day. It was my first time on the river, and my hands shook a bit as I pulled off line from the old Hardy Perfect reel and set up the little superfine 7 foot 4 weight rod. The ideal setup would include a longer rod and a nymphing rig or a streamer, but being the romantic I am, I thought, “When on a river so steeped in legend and tradition, why not follow the lead of the great anglers before me?” Thus, I tied on a size 12 Hendrickson dry fly, and greased the leader. Trent and I separated and walked downstream. We walked far farther than we intended to, mesmerized by the structure and flow of the river and their possibilities. When we entered the water bugs were sporadically hatching, and we soon determined them to be Hendrickson and caddis; perfect. The sun blasted down and warmed the bottom rocks as I struggled upstream against the flows, flicking my first concentrated casts here and there, hearing voices and music deep in my subconscious: Mahler and Marinaro.

Trent quickly located a rising brown in an impossible lie under a tangle of brush and protruding twigs, and quixotically played with it for several hours. The fish was taking flies with spirit, spitting the water in splashy rises, but never venturing out of his cover. Trent would later hook and lose that fish. His perseverance was amazing.

Advancing upstream, I spotted a huge brown rising in mid-river. Although I did everything I could think of to get a presentation to him, casting a 7’ rod upstream 60 feet in fast current against a wind with a dry fly and my back against the wall proved next to impossible. I finally took to spey casting the tiny rod and finally put the fly directly in the right place for a drag-free drift. The fish just swam off. Welcome to the Battenkill.

Then a little fish made a sloppy splashing rise just upstream. After a botched cast or two, the fish ate my Adams (The Hendrickson was lost in a tree behind me). A wave of calm joy warmed my soul as I landed and cradled a wild brookie. I had done it; my first fish on the Battenkill.

As the afternoon progressed and waned toward a serene and calm evening, and the sun caressed the tops of the Green Mountains, the mayfly hatch went insane. Clouds of Hendricksons covered the water advancing up the long riffles. I have never seen so prolific a hatch. However, rises were nearly nonexistent. Trent patiently cast a dry to a brookie that George had seen rise. I made ten casts to it without a rise and moved upstream. Trent then caught that fish after more perseverance. Amazing.

Dusk was upon me when I stumbled through a deep piece of water at the bottom of a large riffle with calm water on the edges and a cobbled bottom mixed with fallen conifers. A fish rose, and I quickly hooked it: another small brook trout. As the fish wiggled off my hook before I could cradle it, another much more defined and energetic splash marked a rise under an overhanging tree limb in the soft edge of the river. I slowly made my way through the underwater minefield stepping on rocks and debris and waded through the waist deep water to put a sidearm reach cast upstream and to my left. The fly rode high on the water and bobbed tantalizingly as it rode down toward the spot that the fish rose. The resulting take left no doubt as to the hungry gourmet. A brown trout engulfed the fly and cut back under the rocks and logs I was bracing myself against and dove deep putting a nice bend in the rod and taking out line which made my Perfect reel sing its little heart out. It wasn’t big, but the little spirited fish made my whole day. 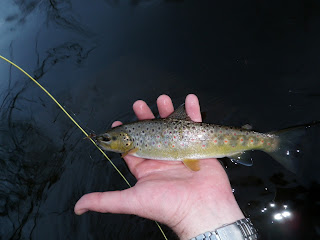 So, there are fish in the Battenkill. They take dries too. They just take a lot of heart and soul and patience to catch. It is not a numbers fishery, but each little gem of a fish should be savored.

I feel blessed. I fished the Battenkill the way ‘God’ intended it should be fished, and it rewarded me with a smile and memories. As the last sliver of sun sank behind the rounded peaks, I took a deep breath of the fragrant spring air and thought, “This moment is what life is all about.”

Thank you Battenkill.
Posted by Erik Helm at 11:37 AM