Recently I have come into possession of a 1950s vintage British Loch fly rod ten feet long and made of tubular steel. That’s right… tubular steel. Heard nothing good about this material? Heard that it was an evolutionary dead end in fly-rod materials? So did I. Until I cast this thing. Perhaps tubular steel might be worth a second look. 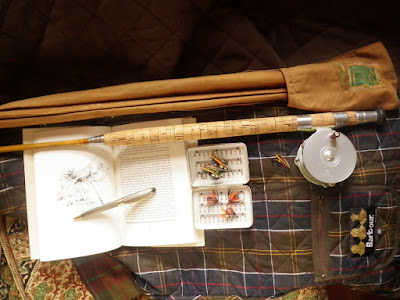 The rod is slow and very full flexing as one could expect. One feels the bend into the grip. It has a nifty little classic metal and rubber butt cap to allow the lower hand to perform some or most of the casting work and provide a fighting base.

So, if we think about it a bit, what we effectively have here is a switch rod, allowing both single-hand and two-hand casting techniques. Interesting. The rod has an agate stripping guide and tip, and is painted to look like bamboo. In the 1950s this would have been a less expensive alternative to cane, but with all the trimmings of a top of the line rod. Gee, but isn’t the switch-rod a modern thing? Nope.

Casting it is an exercise in slowing down and feeling the rod. When one gets it right, the line flies out, the rod doing all the work.

Back after WWII, the British commandeered surplus jeep antennas, and turned them into fishing rods. These non-purpose built tubular steel rods were rumored to be pretty awful, as one can well imagine. This rod is as far from a jeep antenna as one can get… although I did pick up the BBC on it the other day casting it near some overhead power lines…

What makes me sit and wonder though, is the forgotten possibility of tubular steel. After all, this rod is incredible, and that is with 1950s technology and alloy development. What would a modern rod made of this material cast like?

What next for the ‘Anachronistic Angler’?
Posted by Erik Helm at 1:22 PM