The changing aesthetics of our tools 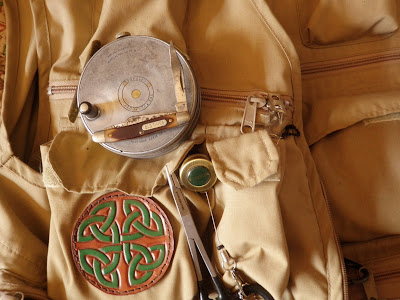 I was going through my old Orvis super tackle pack vest the other day looking for something or other, when I opened one of the pockets and pulled out an old pocketknife. It was a Shrade old-timer model with three blades. At first I thought it was one I placed in the vest, but then as I examined it, I realized that it was in there all along, and belonged to the former owner that I inherited the vest from. The blades were a bit rusty after all the years, so I opened it up and gave it a quick pass with the Arkansas stone and some honing oil. I then sat and reflected that it belonged in there, and so placed it right back in its pocket. It will come in handy for the hundred things small pocket knives come in handy for, most of which can’t be predicted. This was just like my first pocketknife my dad bought me from the Downer Avenue Hardware store back in the early 1970s. That knife is long gone today, but it was cherished back in the day, and a big event for a kid, as I imagined all the amazing things I could do with it, most which would either get me in trouble, or were a bad idea in the first place.


In looking at this knife, it began to symbolize and aggregate a series of thoughts I had been having about the evolution and changes to our tools for the outdoors, fishing and hunting in particular…


I had recently visited a Cabelas store to poke about, and found myself in the hunting and gun area, where there was a knife display. There were still some simple pocketknives on display, but they were outnumbered by far with what I guess could be referred to as ‘Tactical knives.’ These all had several things in common. First, they looked dangerous… even outright gruesome. No bone or horn handles here, just plain utility of black plastic and stainless steel. They looked like something that would be at home butchering a small herd of Jurassic creatures, and if push came to shove, much of the neighborhood. They were half hunting utility knives, and half combat weapons.


I strolled over to the rifle rack to see what they had, and yes, there were still a few classic bolt-action rifles in the mix, but in general, 80% of what they carried were plastic stocked facsimiles of military combat weapons.


Then, while waiting at the bank, I picked up the stack of magazines on the side table and found a recent edition of Outdoor Life. As I thumbed through the pages looking for actual content, (what the heck happened to content?) I began to realize how completely things had changed since that day when Dad gave me my first knife.


Call me dim, or call me Rumplestiltskin, but sometimes I can’t see the bigger changes like the proverbial forest from the trees until confronted with the time to waste looking at things I don’t really want to see. The magazine I browsed through was so different from those I read back in the day, and the biggest changes were to those of our tools, and how they were portrayed being used.


The aesthetics had shifted so far as to baffle me. It was actually difficult to recognize some of the fishing rods as fishing rods. They looked like power tools. Also, somehow large trucks, chewing tobacco, and camouflage clothing crept in on every page accompanying ads for items as diverse as lip balm, or adult diapers. It all had a certain look, a certain aesthetic that sold a way of life. It hit you in the face. All things were POWER, BAD, RUGED, DEADLY. I turned back to the cover to make sure I didn’t pick up a survivalist magazine by accident. Nope.


Arriving home, I opened the mailbox to find a new fly-fishing catalog, and encountered similar themes. There was a new reel named ‘Assassin’, and some of the rods looked like odd struts for racing bikes that somebody had adorned with corporate logo bumper-stickers. There was a new fly rod named ‘Badass’. I wondered what had happened to ‘Goodass?’


Well, label me a luddite, but I was confused.


Everything changes. Consumer products most of all, as our generational outlook shifts and wishes to establish its unique identity, and distance itself in an unending quest from the past generation. Identity is the foundation of marketing. I pondered whether marketing and product design and aesthetics were leading us or following us. Were the changes utility, or a mirror of our collective outlook on the world. If the later is the case, it might be a little disturbing.


I guess I missed the beauty.


Yes, that can lie in the eye of the beholder, but I do think that a classic wood-stocked rifle with beautiful bluing, a pocketknife or fixed blade with rich wood or horn handles, and a fly-rod that actually looks like a fly rod are beautiful tools of the outdoors. There seemed to be no beauty in the black plastic and stainless world, for it contained not just utility, but a perceived technology and newness with more than a hint of ‘Badass’ thrown in for good measure. A technological look was better. Our tools of the trade had to look space-age now. They had to be dangerous.


The language had changed as well. We no longer seemed to be experiencing nature, but instead to be at war with it. Dad fished with a fly called a ‘Professor’ or a ‘Governor’, not a ‘Street Thug.’


There was always was a ‘Look’ to the outdoor sportsperson, from the fishing vest and bucket hat with lures dangling, to the felt shirt, tweed, pipe, and etc. that passes today for classic or old or outdated or silly. However, there was no required look in the past. We all dressed for the outdoors within a certain accepted boundary, but we were not yet pressed from the same mold or else not ‘Cool’. It seemed to me as I looked through the magazines that today, the new aesthetic was the ‘Look.’ That was more important than the deer or the fish, the skill, or the experience. I looked at an ad for a saltwater fishing trip and was instantly aware that if I were to attempt to embrace the new look, that I would not know which way to correctly cock my ghetto flat-cap, or which gang signs to flash as I held up the fish. If I did try, I might be like somebody’s aged uncle who, after imbibing too many martinis at a house party, attempts to perform hip-hop, causing everybody to excuse themselves, or stare at a house plant while grimacing in embarrassment.


But then… I am not the target market. Thinking people who like to read and research tend not to buy-in as readily. We seem to question things more. “Why is this better?” “What about this thing that has worked for years?” With knowledge of the outdoor sports and its history of gear, we can make refined choices, and more and more I see a push-back to a simpler time and an appreciation for both utility and ‘classic beauty’. Perhaps the growing legions of people who are turning away or back feel that marketing and the new gear have finally gone too far, and their intelligence is insulted, or maybe it is because we no longer listen to the noise, being too busy using the gear we have in outdoor pursuits to take the time to ponder if we are up-to-date or cool. When one stops looking in the mirror, a certain freedom can develop…


As a craftsperson I appreciate fine leather, wood, and natural materials. Waxed cotton instead of nylon, etc. Back in the day my father did too, and instead of trying to distinguish myself or differentiate myself by embracing the newness of generational change and marketing, I use what he and his generation left to me. Classic gear. Rooted in aesthetics, beauty and simplicity and not affectation, but also in a simple thrift. My old Pfluger Medalist or Hardy Perfect reels works as well today as it did when dads and uncles were fighting the Germans, and the guns they purchased when home and settled are still providing meat for the freezer. I hunt with Dad’s old Steyer and Browning today.


Just like the old pocketknife I discovered in the vest. Sharpened up a bit and polished, it will relive a boy’s adventures and dreams some fifty odd-years later. It still looks beautiful, and too boot… I actually recognize what it is. It may not be new, cool, or badass, but then… neither am I.