The Growth and Fruition of an Idea: a Spey enigma 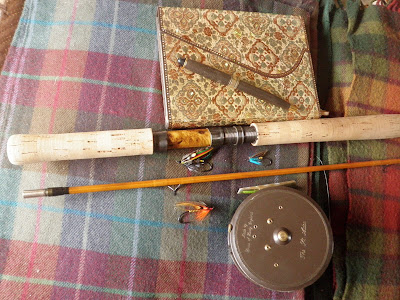 If a person’s day and life is not to become the predictable routine of the potato-eaters, experimentation and risk must be explored, and new things tested and grown. That is art, and what makes life worth living for me, for as Camus wrote, “If life were clear, art would not exist”, and I would add that in clarity are found potatoes.


I was in my new vegetable garden at my equally new home in the Driftless fumbling with tying up tomato vines in the 90 degree heat and harvesting summer squash when another newness presented itself in the form of a call from my good friend Joe Balestrieri the bamboo rod builder and endless experimenter. The query? ‘Did I think a spey rod could be built for smaller rivers like Wisconsin’s Brule’ out of a 9 foot bamboo sharps impregnated blank, and what would one look for in a rod of this type…’


Well, the conversation went back and forth for an hour while I puttered around the garden watering the vegetables and knocking the idea around in my head. We both had ideas about the action: soft and easy. What would the grip look like? Would such a rod be able to be built? Most spey rods are between 12 and 16 feet long, and in my pursuit of the art of spey-casting a longer belly line, and chasing anadromous fish all over the country, I now own over 20, most over 14 feet long. Would such a short rod be able to cast a standard single-hand line, even a double taper with ease? Would it be too short to properly spey cast? The questions added up much faster than the answers…. Those would have to come in time.


One thing I love about Joe is that he is more of an artist than a pure craftsman. Thus, he is always experimenting with ideas and tapers, shaving this down, adding glass tips to cane butts and vice versa, playing around with new ideas, and not afraid to fail if a deviation goes awry. That is a rare thing in today’s world. A freedom that few builders will ever have, and a quality that reminds me of my mother’s great artwork. She was always turning around and going in different directions in creativity and experiment. It filled her world with energy and beauty after a day with the potato-eaters at her dull day job.


Of course, ‘Spey’ casting a shorter rod like 11 feet in length has become somewhat popular recently, as ‘switch’ rods or rods that can be cast with both one or two hands are gaining acceptance, especially when paired with thick and very short shooting heads and running lines, but I wanted the rod to be able to mimic the clean graceful stroke I can achieve with a 15 foot rod and a 70 or even 85 foot weight-forward long belly spey line. Even if the rod could sort of do it, was the symbiosis of rod and line just a wine-induced fantasy? We knew we would be on some new ground here. Did the line exist at all anymore, now that the ‘heads’ and running lines have all but eclipsed them? I had a couple of things going for me here. One was Joe, and his openness to experiment and unfamiliarity with the new generation of lines (he would probably tape on guides and test it with a double-taper silk which would be an ideal test for what I had in mind), and the fact that I have massive boxes of old fly lines I could root through and try on the rod.


As the rod went through the process of creation, Balestrieri tweaked it to make it lighter, and enquired as to what I thought of grip length. “Oh, build it long!” I said, “Long enough to properly spey cast, and make sure the bottom grip is long enough to fit my whole hand around.” After I got off the phone I wondered if I was nuts. In my opinion, the bottom grip on shorter two-handed rods, for that is what he was building here, not a switch rod, are most often too short. This causes problems when casting in the Scottish style of getting the bottom hand started in the process of bending the rod early, and before the upper hand comes into play. Would the longer grips eat into the already short length of the rod and dull the action? Would the whole thing be just a thought experiment? Well, no risk, no reward…


As the rod neared completion, I got weekly updates from Joe as to his thoughts. He cast it in his backyard with a standard 8 weight single-hand line using an overhead cast, and thought it was very fluid and ‘easy’ in its character out to 70 feet. Would it work with a spey-cast? I would have wait for the varnishing and drying process to find out.


The rod arrived one morning about two weeks before I would be up on the Brule’ to search for steelhead. There was no water nearby to test it on properly, as our local river was flooded, so I fashioned a grass-leader out of 20 pound maxima with a series of 3 inch long tags to catch the lawn and simulate the water-tension necessary with a spey-cast.


The rod was aesthetically gorgeous. Balestrieri used clear silk wraps over the guides to allow the beauty of the rich bamboo to show through, and used an amber agate stripper guide along with a matching wood burl reel-seat. It was subtle in its richness and depth. The grip was long and thinner at the back-end of the forward section while flaring into a Ritz-style front. It actually was the most comfortable grip I had ever encountered on a two-handed rod. But would it cast?


I dug out several lines from the fly line mystery box in my workshop/office, and loaded up the reel to match the rod: a Hardy Golden St. Aiden lightweight which I hoped with both compliment and balance the rod. There were so many unknowns in this process. In my head, the rod and reel were the perfect match, and the line I picked as the most likely choice would also work… but it was all in my head up until the moment I stepped out to my private casting lawn at the side of my house.


I would love to say I heard the aria right away, that it just spoke to me, but that would ignore the fact that I had never tried to cast this short of a rod with a long-belly stroke. It overhead cast like a rocket, and I had to climb a tree to get the grass leader untangled from an ancient oak, but it was a quirky rod with a spey stroke. I called Balestrieri, and in the conversation, mentioned the word ‘Quirky’. That was a mistake. Now he wanted me to send it back to him, and build me a different rod. “No, let’s just give it time…” I might have been the quirky one here, for getting used to a new rod can sometimes be akin to getting to know a woman… it takes time. Three days later I had an epiphany. I slowed down my already notoriously slow casting stroke even more, and adjusted the line a bit by holding the end of the taper just at the tip of the rod. It made all the difference. The rod came together with the reel and the line like they were a long lost family.


It was a joy to cast on the Brule’ A true blossoming of an idea that could only be coaxed through its development by a rod maker who is also a great listener, and understands art and humanity, and my quirky ideas, and could meld them with his many years of experience creating objects of beauty and use. I now have a unique treasure, and perhaps the only 9’ 3” long-belly casting bamboo spey rod ever made.


That might make me even more eccentric, but I have been referred to as eccentric before, so if people scoff at it, they can always go have a potato. Instead, I will look at the glowing depth of the bamboo as the graceful loops unfurl and carry a beautiful fly out to a river that is a worthy compliment to a fruit fully blossomed, born in the summer heat, carefully watered and worried over, and finally tasted with a sip of water from the River of Presidents.
Posted by Erik Helm at 3:54 PM