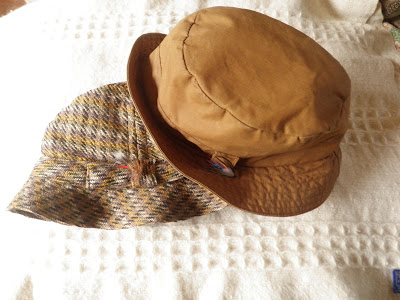 The end of trout season found me putting away gear, and so, to the dreaded overstuffed closet I went. I was clearing space on the top shelf consisting of hats of all variety when it occurred to me that I have a rather large and cumbersome collection of fishing hats in various styles and states of decrepitude. As I sorted through them, each brought back memories. An old Hardy ball cap that I had worn for years while chasing steelhead in the western united states almost got discarded after last year I tossed in the washer and dryer and it turned into a frayed rag, but yet it still sat there with its sweat stains, little holes marking where I stuck flies as I changed them.


Dad’s old Irish hats were stacked in the corner. They get rotated and used each winter season because they hold different kind of memories, and they keep my ears warm, and the snow off my neck. There was an old waxed cotton cowboy hat that sort of melted and deformed and thus fell out of circulation. Tweed caps filled a box. I wear one of them every year on the Brule’ river, and their inner brims were still filled with flies. In the back, buried under yet more hats was an old cap from the first fly shop I worked in so many years back. I took it out and hung it next to my tying area for inspiration.


Sometimes rooting around through old things spurs thought, and I began to ponder the fishing hat as an object symbolic of more: of time, of history, of expression. I may have traveled to the rivers and came home with images of water and fish burned into my cortex, but the hats retained even some of the dirt, the very substrate under the rivers. They weren’t just hats, they were pieces of my angling history.


Sidetracked from my gear organization task, I paged through old copies of fly-fishing magazines and books looking for hats and found a treasury of ads and photos that had one thing in common: that of a lack of commonality. Every hat that could be imagined was donned by the anglers: terry cloth, tweed, straw, the ballcap, the bucket hat, the English driving cap, Irish walking hats, cowboy hats, trucker caps, packet hats, trilbys, even Bavarian alpine hats. Then I looked in a new magazine, and every picture had the same flat-brim ballcap. The variety had disappeared. I had a long discussion with other anglers older than I regarding fishing back in the day and the hats they wore and an idea emerged…


Back in England and in America as well until the turn of the twentieth century, there was a required ‘look’ to going fishing including proper attire, and topped by the finest in fashion chapeau. Sometime in the 1920s and 1930s and into the 1980s a change took place. Anglers no longer wanted to wear a ‘uniform’. They did that five days a week on their job. Fishing became a time for getting away from the factory and office, and an increase of working class anglers and hunters filled the outdoors on weekends. They finally had some leisure time. Entire trains were nicknamed ‘The fisherman express’, and ran out of the cities on Friday evening bound for the woods and streams. The people that left the cities behind also left the dress code behind. They escaped. Wearing a tie and coat with a derby was no longer socially necessary on the stream. People began to express themselves.


A time capsule emerged in 1973 in the form of descriptions of a group of anglers fishing Wisconsin’s Wolf River amalgamated from several of those conversations I had.


There was no look in common to them other than a ‘going fishing’ look, and every one of the anglers had their favorite fishing hat, unless their wife had finally made good on her promise to destroy it. That was one thing they did have in common: the universal detestation of their chosen hat by their wives… That, and a sort of lack of affectation to ‘coolness’ inherent in the varied old hats. The hat itself was a symbol of turning their backs, and breathing free… of escaping the cities… of non-conformism while not trying to look like a non-conformist.


Stumpy showed up in the fishing camp that year with his old gray felt fedora; the top sporting a large hole. As he told it, the hat blew off his head ten years back or so when he was playing a large trout. It had floated downstream and an otter swam out from some rocks on the bank and grabbed it, towing it ashore. Stumpy gave chase after landing his fish, and the hat lay in the grass on the bank soaking wet. The otter was nowhere to be seen. He was reaching down to pick it up, when the otter reappeared by chewing a hole in the very top of the hat and popping out, looking at Stumpy and squeeking. It then jumped into the water and swam away, its squeeking teasing Stumpy like laughter. He never sewed it up, he said, because “The otter must have done that for a good reason.” The rest of the gang speculated behind Stumpy’s back that he was a better angler for it anyway, because his brain now got exposed to more fresh air.


Carl always wore a brown wool hat his uncle had bought in New York after he returned from WWII. He got off the ship and realizing he had no civilian hat, went straight to a store run by an old Jewish man named Isaac. It had pheasant and grouse feathers stuck in the band, and Carl had turned down the brim in front so that it came down nearly to his nose.


Joe had an old ballcap with the logo of some farm machinery company. It was so stained with oil and grease that the name of the company was now unreadable. Joe had found it in an irrigation ditch near a farm while walking in to fish the Oconto River twenty years back. He had misplaced it one year and showed up with a newer cap, and not had a single fish rise to his fly. When he returned the next year, the old cap returned with him cocked at a jaunty angle, and he had out-fished everyone. Since then, he kept it in his safety deposit box at his bank. All his luck was contained in those old oil stains.


Whitey donned a tan bucket hat with blue and red banding. Stuck to the band were small spinning lures, a half-dozen flies, and a blue jay feather he had found.


Lou wore his masterpiece of angling: his fly hat. For ten years, he had always stuck any fly he clipped off his leader into the hat, and never removed it. Somewhere under those hundreds of matted and tangled flies was an actual hat, but no one in the group had ever seen it. It looked like some sort of abstract sculpture. One time while fishing with the group, Lou had been attacked by a dive-bombing red-winged black bird defending his territory. The bird had become entangled in the flies, and Stumpy and Joe had to use a pliers to free it. They were laughing so hard that Lou got sore at them and later after dinner, poured clam juice into their waders. Joe and Stumpy fished the next day surrounded by a cloud of flies they couldn’t shake. They finally dived into the river to escape the hungry hoard.


Frosty had the most dilapidated hat of the group. It started out as a fine Stetson, but his wife had washed it, and it lost its form and much of its color. It looked perpetually droopy and soggy, and the crown had bumps and warts sticking out all over. He had set fire to the front brim one evening lighting a cigar to keep the mosquitoes away, and the hat had smoldered for twenty minutes, creating a large brown and black-rimmed hole. A hillbilly would have scorned Frosty’s hat, it was just that bad… or good… depending on who was talking.


Fred was the only angler in the party that had a new hat. He had bought an Irish walking hat in green Harris Tweed because he said he always wanted one. The actual reason, which came out around the fire after a few glasses of brandy was that his wife had actually burned his old fishing hat in a garbage can in the back yard. The divorce followed shortly after.


These stories made me reflect that these old hats were more than just hats now. Maybe they had become a mold of the head and personality of the wearers: a now seemingly empty vessel full of thoughts, memories, destinations, and companions. Donning them again was like putting on a magic mask that both transformed and empowered the wearer. Luck flowed in the fibers, the cloth and the sweat, and you can almost hear the riffles in the stream… even if they now smell a bit fishy. One more reason to keep and wear that old fishing hat… a new one would have no stories to tell.