Of Trout and Eggs

Of Trout and Eggs 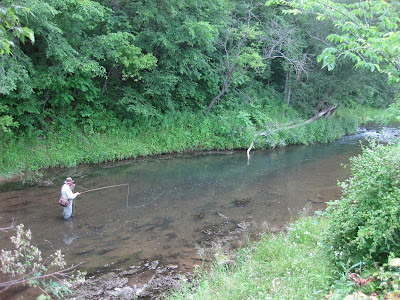 George was a peculiar fellow. I had known him for over fifteen years, and in all that time, I had never known him to keep a trout. He was a strict catch ‘em and let ‘em go oddity. He professed that he had an aversion to eating fish, but that aversion certainly did not extend to the actual fishing itself. Therefore, it was odd when I came upon him one early morning setting up his rod and gear at our favorite trout haunt, that he was carrying a creel. I greeted him, and not mentioning the wicker basket slung over his shoulder, asked if he wanted company. He nodded and we made small talk about the weather, our families, and the prospects for the morning fishing.

George mentioned that he was due back home by 2 p.m. sharp to perform some domestic chores or ‘honey-dos’. Although he never really spoke about it, I knew that he was rather hen-pecked by his wife. One time George even referred to her as “She who must be obeyed.”

It was decided that I would go upstream and fish the dry fly, while he would fish his way downstream with the wet fly. It was a desultory sort of day on the river; not much was hatching, and few trout showed themselves to the fly. After a few hours, and catching just three small browns, I gave up and decided to pick raspberries instead. I stowed the fishing gear in the car, and retrieved an empty coffee tin.

There were always good pickings along the river in July. After an hour, I had filled the tin with fresh berries, and was covered with stains and scratches from the brambles. I scrambled down the slope and spotted George downstream playing a fish. I decided to sit on a rock and just take in the scenery.

George was a very good fisherman, and his chosen method today of presenting a brace of wet flies down into the deeper pools behind the riffles was paying off. His rod seemed perpetually in action, bent to the strain of wild trout. He landed fish after fish and released them. The curious thing was that each fish was subjected to a small tape measure before being released, and that George, always a calm and almost reclusive person, seemed to be growing more and more agitated. Instead of gently releasing the trout, he began throwing the fish overhand while he talked to himself.

After watching him catch at least twenty more fish, I whistled to him and pointed to my watch. He nodded and came stomping up the river towards me. It was just before one o’clock, and that would allow us just enough time to grab an ice-cold coke at the Ma and Pa gas station and general store at the highway junction.

George gave me a very effective sneer as an answer, and broke down his rod, placing it into its protective tube, and into the trunk of his Oldsmobile.

Ignoring the sneer, I opened the creel to discover nothing but some fresh wet grass at the bottom.

He sighed. “Look, don’t give me any razzing, I am in enough trouble as it is.”

He turned to me and said: “Don’t tell anyone…”

“Marsha had poached trout at her tennis club last year, and she got a liking for them.”

“She loves two trout with her eggs for breakfast from time to time, so… well, here I am.”

“Alright, that explains a bit, but then why did you release all the trout you caught?” “Are you trying to put her on a diet?”

“No… but… look… it is the silliest thing; the trout she was served at the club were pond raised and pellet fed, and they were all the same size… exactly eleven inches long.” “Marsha doesn’t mind me fishing once a week, but the single condition is that I bring home a brace of eleven inch trout each time.” “I caught every size fish today except eleven inches, so I am in a royal tub of hot water.” “Say, you didn’t happen to get any that size?”

I shook my head. “No, I just got a few dinks and this tin of raspberries.”

“Alright…” George said, “I guess I will have to think up some excuse or another.” “Maybe she will buy some yarn about my having broken my rod…”

“Yea, that could work, except that your rod is not broken…” “She surely would notice that!”

“I hadn’t thought of that… but I will have to come up with something nevertheless.”

I left him to ponder his story on the drive back to the highway. Arriving at the little ramshackle store, we both gassed up our cars, and went in to get a coke.

Old Mr. Jansky was behind the counter, looking like part of the debris surrounding him. The smell of frying onions greeted us even before his smile.

He opened the big red and white cooler behind the counter and produced two bottles covered with ice. I paid. The way I figured it, George was already behind the eight ball, so this one was on me.

The shop door opened and a tiny bell tinkled. It was a young boy, perhaps twelve years old. He carried a long worm pole, a Folgers coffee tin strung to his belt, and a wicker creel. We made way for him at the counter, and took long swallows of ice-cold coke. The boy asked how much for a coke and hamburger. Old Jansky told him “That would be fifty cents.”

The boy rooted around in his dungarees and produced a quarter and three pennies. He had enough for either the burger or a coke but not both. I winked at George. The wink was intended to convey that we should make up the difference… the only kind thing to do. Instead, George asked the kid what was in the basket.

“I got two green trout!” He proclaimed proudly.

The young man opened the basket, and lying on an old wet newspaper at the bottom were two very fat chubs. “See…? Green trout!”

Then George did an unexpected thing. He took out his tape measure and found that both of the chubs were exactly eleven inches.

“Don’t even think of it George!” I cried.

“Why not?” “The way I figure it, with the heads and tails cut off, stuffed with onion and basil, and baked in butter, Marsha may never know the difference!” “Worst case scenario, she chokes or gags on them and then stops nagging me to bring back fish every time I go out!”

“Say, kid… what are planning on doing with those ‘Green trout’?”

The boy answered that he thought he might feed them to the cat.

George said he had a better idea… “How about I trade you a coke and a hamburger for those two fish?”

The boy nodded happily, and George paid Jansky the fifty cents, taking possession of the fish in turn and wrapping them in the newspaper. He winked at me as we finished our cokes.

“Thanks bud… I might need it.” “I just hope she never notices the difference!”

We parted ways, and it was several weeks before I ran into him again.

I was fishing our local stream close to the springs at the top end, because the water was too warm at the bottom to hold trout. The day was 90 degrees in the shade. I had done pretty well on a Professor wet fly, and had killed three nice ten-inch trout for dinner. That was enough for me. Driving downstream, I observed a car parked along the bank of the lower part of the river. Nobody every fished there this late in the year, except worm dunkers after panfish and bass. Then I hit the breaks. It was George’s car, and below the little farm bridge, I saw his hat showing above the brush and grass. He was fishing. I parked the car, got out and walked to the bridge to watch. He was deep in the pool casting and swinging his wet flies. I yelled to him.

He looked up with a shocked and guilty expression, and stomped up the bank to meet me.

“Teaching worms to swim?” I quipped.

“No, you wise-ass, it might occur to you that I am actually fishing.”

“Yea, that is obvious, but why down here in the warm water?” “I caught some beauties upstream!” “There are no trout down here.”

George got out a cigarette and lit it.

“I didn’t know you smoked?”

“I don’t… but sometimes it helps calm my nerves.”

“And… your nerves need calming because…?”

“The whole scheme backfired badly.” “Marsha loved the chubs.” “She said that they were the best trout she had ever eaten!”

“Oops is right… She wanted to know where I got them, and why they were better than the ones I had been bringing home up till then.” “I made the mistake of telling her they were ‘Green trout’.” ”She directed me on the spot that from now on, I was to bring her nothing but these new fish.”

“So that is why you are down here playing in the muddy water!”

“Oh go soak your head!” was his reply, as he walked back down to the bridge pool to try to catch his two identical eleven-inch minnows.

A couple of weeks later I was grocery shopping when I came across a special on smoked chub. An idea came to me, and I bought one. I put it in the oven on low heat for four hours and then let it hang from the rafters for another week until it was as hard as shoe-leather. I mounted it on a piece of driftwood, and using a marker, wrote this inscription: ‘World record Green Trout’ ‘Caught by George Marky’

I sent it to him in the mail almost three months ago, but I have not heard from him since.

I don’t think he was very amused…