(Author's note: A true story as imagined, and told from a different perspective: that of the rod itself. The history was itself dreamed and imagined, and who knows who owned the rod in its 100 years, or where it accompanied the man to the rivers. The Italian looking man is Joe Balestrieri, who restored the rod from a lonely tomato-stake, and yours truly had the joy of a re-birth or awakening in a stream never fished before in a setting beyond beauty.)

The rod was born in a large brick room by being split, beveled, and glued into something new. The creator had a beard and whistled to himself. He wrapped the rod with red silk thread and gave it a shiny finish with a brush. The rod remembered the before-time only vaguely: like a pre-natal memory of swaying in the wind with his brothers and sisters in some far-away place.

The creator finished the rod with pieces of cork and a metal handle stamped: ‘H.L. Leonard, Leonard and Mills Company, Makers.’ A newspaper folded nearby proclaimed, “Calvin Coolidge elected President!”

The rod was carefully nestled into a cloth bag with sections for each of its three pieces, and set on a shelf under a sign that read ‘Finished Fly-Rods.’

The six strips of tonkin cane carefully assembled now had a name and a purpose, its colorful silk wraps, snake guides, and metal ferrules all coming together to bend again in a different but similar way: the hand of man directing the process, but the rod flexing to its own rhythm and dance in pursuit of a trout. The rod did not know what a ‘fly’ nor a ‘trout’ was, but it could dream…

The rod was taken out of its case and bag and placed in a display in a large open room crowded with curious other items. Through the tall windows, the rod could see that the street outside was full of noise and motion. Then the rod waited patiently to be chosen, and dreamed of things it knew not about.

The man came at noon on a Saturday. He smoked a cigar and wore a brown felt fedora hat. He examined a few other rods before picking up the rod. He closed one eye and sighted along the sections, then placed the rod together and wiggled it. Finally, he gave the varnish a little sniff, produced a small handkerchief from his jacket pocket, gave the rod a gentle caress, and said, “I’ll take this one!”

The rod learned to dance in the man’s hand, to roll a silk line through the air with graceful curves, and to bend and play a trout. The trout were speckled things that lived in beautiful places where there were rivers and mountains and valleys. The man and the rod made many memories together; paths wandered, rivers waded and crossed, and fish brought to hand. After each time the new memory was made, the man took out his handkerchief and carefully but lovingly wiped down the rod. The rod felt needed, and in that need, that symbiosis of man and rod, of trout and river, the rod felt alive. The rod and man were partners. The man’s hands staining the cork, his very fingerprints burned in like the memories. The rod smelled of varnish and fish, and it was happy.

One crisp fall day when the leaves were turning to fire, the man took the rod up the narrow stairs in the house he lived in, and placed it against the wall of the attic space. The rod heard the man’s footsteps slowly creaking as he descended.

The rod waited patiently for the man to come back, but the weeks and months passed by with only the cracking of the attic woodwork, the whispers of mice, and the sound of the wind to keep him company. It became cold in the attic and then warm again as the seasons passed, but the man did not come. The rod, in its protective bag became covered with dust. Its varnish began to crack and it became weary and tired with waiting.

The rod, lonely now, drifted off to sleep.

The rod awoke from its slumbers and dreams to the sounds of voices and boxes being moved and banged about. It was bleary and confused. A hand grasped its cloth bag, and the rod heard once again the creaking of the stairs as it bobbed and descended. It was placed on a large table with other things that were covered in dust. A man took the rod out of the bag and began to blind it with bright flashes of light while talking: “Number 247, fish pole,” he said. The rod thought this man looked a bit like his friend of the memories, but was younger, had no hat, smelled funny, and wore odd clothing. The rod looked at himself on the table. His skin was old and wrinkled, his silk wraps hung in tatters, and mice had chewed at his cork handle. However, his bamboo core was straight and true, his memories as present and intact as his loneliness.

The rod briefly slept again before it became aware of great motions. It was in some sort of container, and was being jostled and turned. Sounds of clicking, whirring, beeping were finally concluded by footsteps and the sound of a doorbell.

A different man said, “Come in! Put that tube on the table, but keep all the bills!”

An Italian looking man with graying hair took the rod out of its bag, his movements precise and quick. “Who are you? The Italian man whispered to himself, and “What have you seen in the last 100 years?”

Sniffing the bag, the Italian looking man wrinkled up his nose, and placed it in the trash. The rod was worried now. What would happen?

As if the Italian looking man could interpret cane thoughts, he chuckled out loud, “Don’t worry old boy, you are in good hands now!”

The rod was placed into a cool bath of funny-smelling liquid. When it emerged, it was naked again. Gone were the wrinkles of age. The Italian looking man removed some of the frayed silk wraps, poked here, and fussed there, glued on another ferrule, and gave it a new baby’s skin of clear varnish.

Then the rod was placed in a new cloth bag and set in the corner where it waited and worried about sleep and wrinkles and time and men.

Then a funny thing happened. The new man assembled the rod and wiggled it. He smiled and stated, “Nobody will ever understand this old girl. I’ll take her!”

On a fine sunny spring day the rod was assembled again in a place filled with green hills and valleys. The new man cast the rod and raised his eyebrows. The rod learned the new cadence of the man, and the man grew to understand the rod. A slower tempo, graceful and reflective was agreed to. The rod learned a few new dancing moves as well. The new man taught it to curve in circles, gently shooting line straight to the target.

The rod was returned to its new bag after the new man took out a cloth from his pocket, and gently polished it. It rested quietly for the time being.

The next time the rod emerged from its shroud it was in a different setting. Mountain peaks surrounded a meadow full of sage and wildflowers. The sky was the clearest blue, the air crisp, and the few clouds so close above that the rod felt that it could touch them.

The new man took a reel out of a leather case. The reel was as old as the rod, and fitted perfectly to the handle. The reel had a patina too, and its own memories from long ago.

The new man carried the reel down the slope to a small stream with water so clear that the rocks shimmered through it. The wildflowers lined the bank in pinks, blues, purples, and yellows of every shape. Birds dipped over the water as the new man tied on a dry fly to a gossamer tippet. 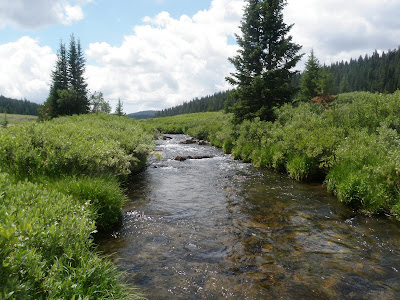 Then time elongated as the new man, the rod and the water became one in a harmony of stillness. All eyes and instruments tuned and waiting for the baton to strike the downbeat, and the concerto to begin. Slowly a mayfly ascended the scale, only to descend it again. A caddis took up the refrain and elegantly brought it to a quivering and tantalizing riffle. The rod bent back and forth, the line gliding out in hovering loops as the fly gained speed and then settled gently at the end of the fast water.

A jolt shot through the rod like electricity, and it was raised sharply as a trout engulfed the fly. The trout was born in the mountains. It was as young as the rod was old, and its spots and red slash mimicked the vibrancy of the wildflowers. As the fish was released, it looked at the rod, and their eyes locked. A gentle breeze moved the wildflowers. Time met, contracted, and expanded and circled back again. The young were old, and the old young again.

The fish swam back to its home. The fly danced again through the thin air, and the rod was very happy. 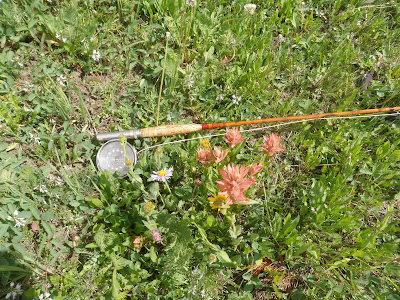 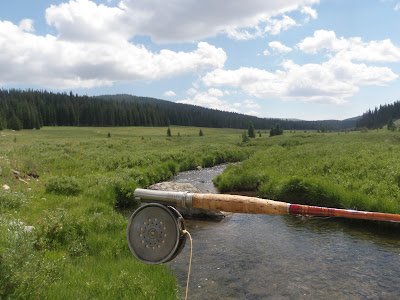