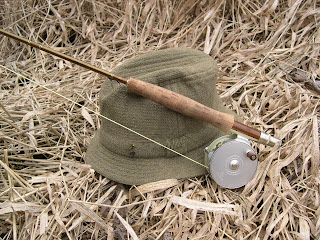 On numerous occasions when I am fly fishing and am close to a public area, people will stop to watch. I guess I don't mind. Its not like I want to make a spectacle of myself, but I gave up skulking away muttering into the bushes years ago. Now, I just smile and nod.
People say the darnedest things. Questions vary from the typical (Whatch ya fishin fer mister?) to the inane (Are there fish in this river?).
I smile and nod...
One time a guy stopped on the bank and told me that I was "Doing it all wrong". "You have to wave the rod back and forth over your head like this" he demonstrated. "I know" he said, "My friend fly fishes". I was casting a spey rod and performing a double spey at the time.
Smile and nod...

One scene I have encountered numerous times is touching but sad. A family will come down to the water's edge to watch me cast. Mom sits on a rock as Dad and son look on. "What's he doing Daddy?" the child asks. "He is fly fishing son" the father responds. "Do you fly fish Daddy?" the son asks, looking up to his father with wide worshiping eyes. "No, son" he replies slowly with a faraway look. "I always wanted to, but I guess I never did." "Your Grandpa fly fished. I still have his old rod" "Really, where did he go Daddy?" "Oh, he used to catch brook trout up north." "He would drive up in the old Ford early in the morning and be back after dark." "Your Grandma used to like it when he went fishing, she always said it made him easier to live with."
"Will you take me fly fishing someday Daddy."
"Maybe, son...Maybe.."

"I always wanted to". Those words are a sad testament to our over-busy lives. The over-scheduled children and soccer parent lifestyle doesn't allow quiet unstructured time away. A whole generation of children are missing out on fishing with Dad and Grandpa. Legions of children are spending their time becoming the 'Pod generation'.
Grandpa found the time to go fishing, even if it was never as much as he wanted. My Grandpa raised ten kids in a small house while running a hardware store. He worked all day six days a week, and after dinner, would help people install or use the equipment or supplies he had sold them. He still found time to visit the Black River to catch musky and pike. He taught my uncles to fish, and I have black and white pictures of the proud boys holding up their first big pike. They are wearing old ragged clothes, and a smile as big as the fish they hooked.
Most of the boys grew up to appreciate the outdoors, and became hunters and fishermen.

My dad taught me to fish when I was around eight years old. I baited my own hooks, dug my own worms, and caught panfish. He never really fished much, but hand-built spinning rods that were works of art, and collected lots of tackle. I used to love to listen to him talk about fishing. He would talk for hours while smoking his pipe, as I imagined great adventures. I stopped fishing after age fifteen, and instead pursued all the life-lessons and mistakes awaiting every young adult. What my Dad had planted would germinate again in my thirties, when I returned to rediscover what made me happy as a child.

Fly fishing can be intimidating, but there is no other way to get started but to pick-up Grandpa's old rod and catch a bluegill. Can't you feel the memories in that old rod? The cork that he wore down with his tireless hands. The little repair he lovingly patched with glue and varnish. The odd fish-scale stuck to the wrappings. Oh, the stories and memories it could tell... but not from the closet.

The Wisconsin DNR runs a program where they stock area park ponds with hundreds of rainbow trout in early spring. The stocking is supposed to allow young anglers a shot at catching fish, and adults are forbidden to fish until later in the season. This year, due to allergies to neoprene and eczema on my feet, I stayed away from the trout streams and fished these ponds for the first time. I saw very few children. All the kids and families that I did see were African-American. The parks are not in what you would call the ghetto, instead border on the most affluent neighborhoods in the county, so I started to think about this. These families fished together, and the fathers taught their sons how to bait a hook and have patience while watching a bobber, while all the rich kids were engaging in structured activities and team sports. Not to take away from that, but I believe there is a place for the solitary exploration of youth. Times to be spent wading barefoot in a creek catching tadpoles and crawdads. Times to learn what your dad learned from his dad.
It seems that most middle-class white people don't fish unless they can get into a boat and roar around making noise.

So, take that fly rod out of the closet. Take a kid fishing. Pass on the love of gentle and quiet sports.
Then you won't have to say "no space of regret can make amends for one life's opportunity misused! Yet such was I! Oh! such was I!" (from A Christmas Carol by Charles Dickens)

(The hat in the photo was my father's. I wear it in memory of him)
Posted by Erik Helm at 2:06 PM