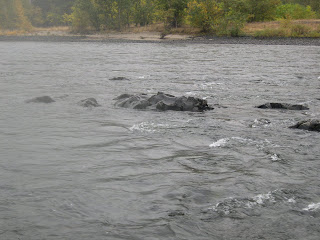 One of these days the crap I wade through will be my undoing. I am a good wader only because I retain my respect for the river and moving water, as well as knowing my limitations, and the water I am in. It really doesn't matter if you are a skilled wader on some rivers; they will get you anyway.
Basalt has several distinctive forms, one of which I refer to as "Volcanic glass". This stuff is so slippery that wading on it is like walking on bowling balls covered in crisco while you are wearing roller skates. Some rivers such as the Clearwater and Deschues are full of this stuff. Other hazards are porous basalt or granite boulders that have collected in riffles and rapids. Here the shallow clear water allows various algae to grow on their top. Even looking at these boulders wrong can see one upside-down in the river. Gibbs Eddy on the Clearwater is one run that contains boulders like this. For some reason when I first went out to Idaho, somebody had recommended the run as being "Easy to wade". I remember finding myself literally crawling over rocks bracing myself with one hand, and finally getting to a point that all movement seemed impossible and would result in a dunking.
Loose gravel and small basketball size rocks in fast riffles are hazardous as well. They tend to come loose or slide at inconvenient times. The only time I ever cartwheeled through a rapid, it was on a run like this. It was not a good experience. One second I was progressing to the other side, and the next I was viewing the river in a more intimate way. My fishing partner said "Watch out, that's how you can break a leg!", Good point, I will try not to tumble through rapids any more.
There is a secluded run on the Deschutes that we were directed to in 2004. It is a little hidden and hard to get to. The wading was brutal. My fishing partner allowed me to go first and pave the way of course. I was so naive. I thought he was allowing me to go first on all the new runs out of courtesy. Ha! He had ulterior motives. At one point a huge shelf of rock allowed one to walk on it's surface for twenty yards or so. Then, without warning, the shelf dropped off on all sides. The literal point of no return had been reached. I slipped off the side nearest to shore and was able to walk on tippi-toes to shore without getting wet. The water came up to the top of my waders. When exploring new water always move slow and fish with a partner if possible. That way he can secretly film you as you stagger about and fall in.
Sand bars can be fun too. One run on the Deschutes is accessible from shore only if you wade out on a hidden sand bar. You do this by lining yourself up with a tree on shore and a rock in the river. Then you move cautiously forward and pray. Rivers are full of moving water, and this tends to easily shift sand bars around. The last time I was out there the sand bar had mysteriously vanished, and I found myself once again walking on tippi-toes back to shore.

As awful as the wading can be on the storied rivers of the Northwest, our Great Lakes rivers often have their own perils.
Many of our rivers are rain dominated, so the flows can vary wildly. During periodic flood events any structure in the river like a log jam or boulder spit can cause the water to hydraulically dredge and scour the river bottom. An easy wade one year may not be easy the next. We have undercut banks that can be deceptively deep. The rule of thumb is if you don't feel safe, don't do it. It is not worth a drowning.
One spring day around 2000 or so, I watched as another angler fished a gravel bar and fast riffle. As he got further into the run the depth increased putting more water pressure on his body until he began to slide on the gravel, wildly trying to regain his footing. He tumbled in a cartwheel, went under, and emerged at the tail of the run, soaked and cold, but otherwise unhurt. I waved to him and he waved back to signal that all was well. He then got out on the bank and began to remove his waders to pour out the water. That is when idiot #2 showed up. He walked right past the first guy drying off, and stood at the river's edge. Then he did something unbelievable. He took a single step into the river where it cuts under the roots of a tree. Splash!.... All I saw of him for a few seconds was his blaze orange hunting cap as it floated down the river. He emerged at the tail of the pool as well, and walked past the first wet guy a second time.
Lesson;
Spring runoff can be hazardous too. For some insane reason, the park service or whoever cuts down trees in the area of the river,often leaves the resulting logs lay where they were cut. This guarantees that when you are fishing in a beautiful run, the water is high, and you are in some kind of Zen-zone as you swing the fly through the fishiest water, that you will suddenly be struck smack in the butt by a huge drifting log, causing you to cry out #$&*@?, and have to sit on the bank for awhile until you adrenaline level drops.

The most irresponsible thing I have ever seen are bait and spawn fishermen standing on a fragile ice shelf over a ten foot deep hole above a rapids. The water temp was about 35 degrees. If the ice broke, they were dead. Period. I went to a different part of the river as to not have to witness it if it happened.

Famous last words:
Wading in rocky rivers is a skill one learns by simply being in the river. There is no other way to put it. Experience comes with time.
Now let's hope I don't fall in.... D'oh! Glug...
Posted by Erik Helm at 11:34 AM