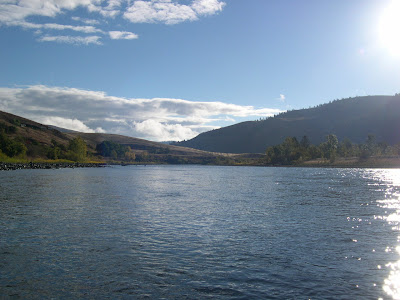 A little story I wrote to protest the killing of wild fish. This was specifically in response to a post on Washington Fly Fishing regarding a 30 Lb. steelhead caught and killed on the Hoh river on the Olympic Peninsula.

Once upon a time there was a great river. It ran free and wild from the glacial mountains all the way to the sea, and was filled with wild steelhead. Anglers fished it for years, and tradition and legend were powerful. Then, one year, the state decided that revenue generation was needed through increased fishing license sales. To that effect the state allowed a single wild steelhead to be harvested per angler-per day. Pressure increased, but no one was worried, after all, the river had over 30,000 returning wild fish per year. Ten years later the fishery collapsed. Everyone searched around for the culprit. Some blamed the Native Americans, others the foreign anglers. People blamed the commercial fishing boats out at sea, they blamed the cormorants, the seals, pollution, bears, etc. They decided to have a meeting in the town hall to determine what had happened. Angry and concerned anglers and citizens filled the limited seats and spilled out into the aisles. For hours people spoke, expressing their opinions. Experts showed charts and graphs. Finally one old wizened soul with unsteady hands and hunched back went up to the lectern. "I been lis'nen to ya here, and I think I can tell ya what's what. I lived on dis here river all my life. I got three pounds 'a pretty pebbles in my pocket. I'm puttin them on this here table, and I want each of ya to come up here an' take just one." The old man produced a mound of shiny polished colorful stones on the table, and each concerned citizen went forward to select just one from the pile. When they were done, there was just one semi-precious stone left. "Now I's gonna tells ya what happened to the fishes" the old man said. He slowly walked over to the single remaining stone, and grasping it gently between his shaking fingers, raised it up to the light, and then slowly placed it in his pocket. "I got mine" he said. He slowly walked out of the meet'n hall. The citizens hung their heads, and muttered protests and realizations could be heard. "But I only just took the one..."
Posted by Erik Helm at 12:21 PM