A run full of steelhead 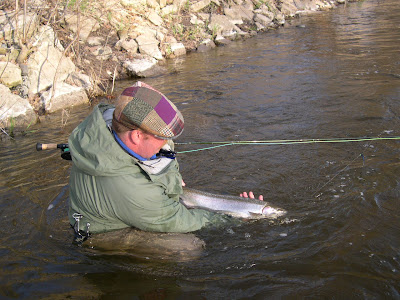 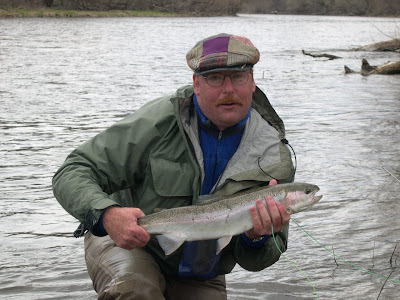 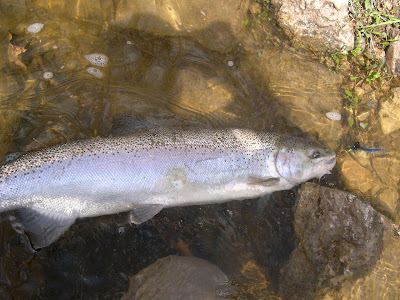 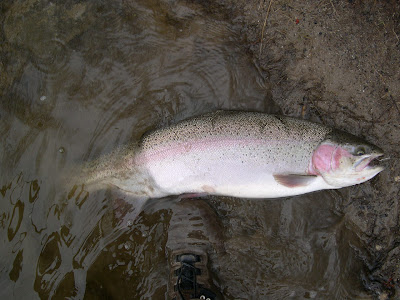 On the Dec Hogan spey casting video, he memorably says of a piece of water on British Columbia's Dean river "Well, it looks like we walked into a run full of steelhead."

Once in a long while this can happen. Everything must be correct; water temperature, flow rate, clarity, and of course ... steelhead have to be in the river.

I have taken two fish from a run before, and once hooked three, but never four or more in a single pass through a run... until now.

After the last rain I caught the river at high flow but clear and falling, and had a heck of a half hour. The first fish felt like the bottom. I raised the rod, felt a slight pulsing, and set the hook. The fish tore off down river and buried the fly line and running line in the water as it went into the backing. Then it jumped up river. I always love that when you are momentarily of out of control.

The second fish hit hard on the swing, boiled and thrashed, and the hook pulled out. The very next cast in the same place WHAM! fish on! A different fish. I fumbled around trying to land the fish in the deep boulder-strewn waters, took a quick photo, and released it. Well, it looked like I had walked into a run full of steelhead!

After progressing about 75 feet further down the run, I got hit hard in the swing again. The steelhead gave a couple of quick head shakes telling me it probably was a small hen, and then took off downstream. I raised the rod and just let the hen take out all the line she needed. 150+ feet of backing, 120 feet of running line, and the fly line raced through the water in one long run while the hardy salmon # 2 wailed in protest. Then it was time to follow the fish and endlessly wind back in all the line stretching to the fish.

These fish were not there the day before, they had just moved in. They were not really bright, but feisty in the extreme. One may have been a drop back. The rain definitely moved the fish around a bit.

If you ask me where I caught them, I will say... right in the corner of the mouth!
Posted by Erik Helm at 11:20 AM