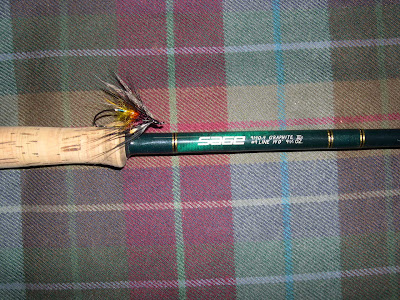 I just purchased a new used two-handed rod. The sage 9140-4 graphite IIIe ‘greenie’ is a classic. Some may question my sanity at getting yet another toy, as well as purchasing an older rod when more modern and ‘better’ rods are available. This rod was previously owned by Brandon Luft, an excellent steelhead fisherman. I know it has good karma since I purchased my first spey rod from Brandon years ago, and used it on my first trip to the pacific north west to fish the Klickitat. So, this is the second rod of his that I now own. I kind of like owning a legacy, as well as not purchasing new stuff and adding even more junk to the planet. This rod is the one most described by veterans as the rod that they once owned, sold in search of the magic bean, and later wish they had never sold.

It is a slower rod, and requires a precise and smooth stroke to avoid pretzels in the line. This is why I bought it. I have been practicing my spey casting rather obsessively on the river lately using a longer belly line (65 ft. head) than I am used to. I am trying to develop my single spey along the lines of an underhanded stroke but with more follow-through on the forward cast. While practicing, I have to go through the crazy but inevitable questioning as to what I am fishing for, and whether I am catching anything. Nobody believes I am just practicing. When I show them the fly with the bend and point broken off, they look at me like they are ready to reach for their cell phone and call for the straight jacket and rubber room for me. They often grab their children and tow them away, as if I was some eccentric to be avoided. “Look Jane, there is that crazy guy with the Irish hat in the river again waving that long pole back and forth.” “Should we call the police?” ‘Nah, he is probably just some harmless burnout from the corporate world.” Some people point at me as if they were observing wildlife. “Look Billy, the river habitat restoration is having an effect.” “It has attracted a native hippie fly fisherman.’ “They are rare these days and quite endangered.” “They are often attracted to bagpipes and the sound of running water.”

I practice for a number of reasons. For one, it is joyful. I love putting out long casts with a tight loop. When it is going out effortlessly, it becomes like ballet. Another reason I practice is that I can’t stand casting like crap. When my casting is off, it infuriates me. The inability to cast to exactly where one must place the fly is the one single greatest reason that people struggle. I am not just talking about long casts, but also short and accurate casting as well. Watching someone fish with a fly rod who cannot cast well is like listening to a violin concerto played badly on an out of tune instrument. It is unpleasant and ugly. Thus, I practice, and practice, and practice… and still struggle some times.


A longer limber rod and long dry line is my preferred method of fishing for steelhead, and since I seem to care about tradition, it is also my reaction to the slide of two-handed fly-fishing into the realms of bait casting with its giant ‘lure’ flies and shorter and heavier ‘fly’ lines. Casting a long line just becomes more joyful with the pretty loops unfurling versus the ‘flop and lob’ of the Skagit style. It is also infinitely more difficult. There is more to go wrong with every foot added to the belly of the line.


Casting should be effortless. When I set foot on a steelhead river, the last thing I want to be thinking about and fussing over is my casting. Gear is the same way. Be at one with your rod and line, so that when you are actually fishing, you can enjoy the experience instead of futzing with your equipment or stroke. I watch guys fiddle with their equipment far too much while fishing. Fiddle and futz during practice, not when the fish are cooperative.

For the handfull of readers that are still bored enough to be reading this at this point, here are some casting notes from the legacy rod: Single spey.

Bottom hand is essential. The Dec Hogan style crescent lift aids in feeling the lower hand early in the stroke. Bottom hand plays the key in the D-loop formation as well as the forward stroke. I played with the traditional style of extending the upper hand and arm at the end of the forward stroke, and it helped, but I don’t like the wear and tear on my arm, so lower hand power it is. The rod should do most of the work. I found that when my casts were really good, that I was putting very little effort into it. I could feel the rod load during the lift and progressively load all the way through the formation of the D-loop.

The body rock back during the D-loop formation is also very helpful at allowing a longer forward stroke to occur. It also aids in allowing a higher angle of delivery.

Line turnover is a problem. The Mach 2 plus 8 wt line I am using weighs 570 grains, but has a really long noodle-like front section of seemingly level line. After playing with the line for the past month, changing to a much lighter leader, and changing my casting stroke, I am going to begin to chop the front of the line carefully in one-foot increments. This is common on long tapered lines. The turnover now has squiggles in it that I am at a loss to control. The turnover problem occurs at both short and long distances, and with a forward spey, snake roll, double spey, single spey, Perry poke, circle spey, etc. Some of it is my stroke, but now I am certain that some of it is the line as well. Otherwise, I like this line. Turnover is essential. A hundred foot cast that does not turn over completely could be better handled by an 80 foot cast that does turn over.

I learned from watching my D-loop form that I commonly had a downward trajectory, and this caused the line to pile into the water a bit and increase line stick. I still do this from time to time, but in general the trajectory of the D-loop is now much better.

This rod is easy to over power. If I put some muscle in it and place too much emphasis on my right arm, then I get a secondary power robbing downward hinge in the outward-bound loop. I am notorious for this. I need to back off the power, slow down, and let the rod and line do the work.

Getting this rod matched up with line and stroke may be a lot of work, but the glory is in the end game, when and if it travels with me a to a mist filled steelhead river at dawn, and deep in the canyon and cradled in my arms, watches me with vibrating anticipation as I tie on a size 3 dunt and offer it to the steelhead gods with a hope and a prayer.

Is there a soul in this rod? Or, is it just anthropomorphism? Only time will tell.