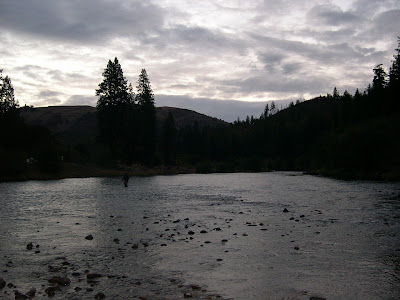 Steelhead and salmon are disappearing from rivers all along the West Coast. Some rivers are now effectively lost altogether. The storied rivers of northern California that sustained some of the greatest runs of fish in the continent are now shadows of shadows of their former selves. The Skagit and Sauk are down to the last fish. Only twenty years ago they held amazing numbers of fish. The Salmon river in Idaho that took its name from the great fish that swam six hundred miles from the sea is empty.

Mankind’s legacy of development and destruction is coming to fruition. Rivers dammed, habitat destroyed, forests logged, mine tailings dumped, soil eroded, we are all witnessing the end game.

With the right to chase game obtained by purchasing a license comes some inherent responsibilities. The main responsibility is to become involved in the stewardship of rivers, fish, and habitat. This often does not involve much more than joining a conservation organization, writing a letter or two, or even speaking at a public meeting. Alas, it seems that this is too much to ask for many anglers. Someone else will do it… right?

One of my favorite rivers to chase steelhead has a crowding problem. If one didn’t know better, it would seem that more anglers then ever before are fishing for steelhead. Instead, it is the few remaining rivers left that offer fishable numbers of steelhead that are concentrating anglers. The rest is just a memory. See that cover shot of the happy guy holding the monster steelhead in that 20 year old book? Chances are the fish are long gone from that river. Twenty years. A blink of an eye in time. Gone. The genetics developed by natural selection over thousands of years destroyed and never to return.

Conservation is a daunting battle, and we are always outnumbered and out financed by development interests, but now and then we manage to win a few contests. On rivers all over the country, dams have come down allowing silt buildups to dissipate and fish to migrate freely, habitat is being set aside for preservation, and riparian areas are being restored.

In all forms of government there is power in numbers. People in numbers can defeat any corporate, development, or state interest, but only if we act. Apathy will get you nothing… literally.

Given the drastically declining numbers of salmon and steelhead from California all the way to Alaska, this may be the final inning. We either need to step up to the bat, or retire forever. The slogan “Think globally, act locally” should be our motto. We may not all be able to fight environmental battles in Alaska, Russia, Botswana, or even Washington state, but our efforts through local conservation organizations can reach farther than we often think.

So, you have a right to fish? Now you have a responsibility too. Will we answer the call?
Only time will tell.
Tick…tick…tick…