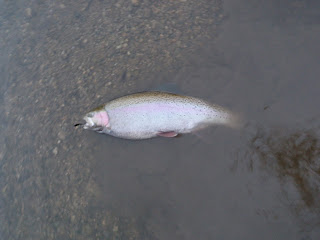 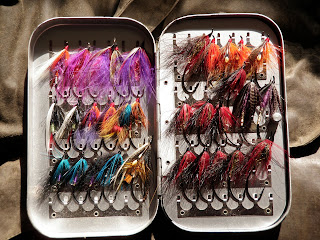 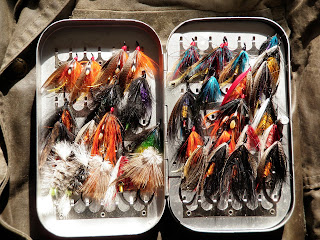 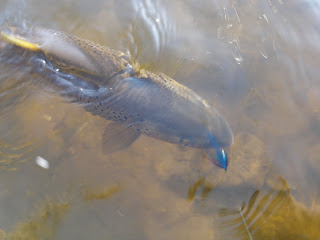 This fall I have tried to commit as much as possible to swinging a floating line and classic flies on the Milwaukee River for steelhead. It was and is a very interesting learning experience for me. Discoveries were made every day. Some things I took more or less for granted began to be questioned, while other prejudices were erased. I fish a floating line in the PNW for summer-run steelhead quite a bit, but most always fished a sink-tip back here. I did fish with a floating line from time to time over the years on my home water, but always succumbed to a lacking in confidence before long.

Here is a summary of what I have learned thus far:

Fishing with the floating line and classic flies does work, but not in all conditions. Higher and dirtier water is the enemy of the dry line. Some runs with slower water can still be fished during higher water. Temperatures are important, but not as limiting as many people suggest. I hooked fish in 39-degree water. As the temperature decreases, so do the avid rising characteristics of the steelhead. Water temps above 38 degrees, and I am still in the game. As the water clears and drops the fish tend to become quite ‘grabby’. Fish that have been in the river for a while tend to be less aggressive risers to the fly. Often daylight is a killer when the water is clear and low. I did best when light was off the water.

The amount of fishing pressure definitely mattered when using a floating line. Our river is just too small to allow dozens of anglers to flog a run. If I got a chance to fish a run that had not been pressured then I seemed to have greater luck than if I got into a run after it had been frothed to death. That is not to say that I could not follow anyone through a run. If the person going through ahead of me fished like a heron and cast cleanly, then I had all the confidence in the world. However, If the person was using 20 feet of T-14 and couldn’t cast, was hung on the bottom all the time, had to wade through the run to free their fly, repeatedly made failed cast after cast, or chucked gear all over the run and was not delicate, then I think sink-tips would help to place a fly in front of a harassed and dour fish. Fellow anglers fished through pressured water with big flies with movement and light sink tips and still picked up fish while I did not.

I found that classic flies do work, but that I had to fish larger irons such as 1.5 AJ hooks or 1/0 7999 Tiemcos than I do out west. I also found that flies with some flash such as a mylar body seem to have more fish-calling power. The interesting thing about fishing irons is that they actually achieve depth far faster if lightly dressed than do string leeches, intruders, etc. What they do lack is movement in slow water. For some reason our steelhead often hang out in unlikely places with little flow. Here flies with movement such as rabbit strip or marabou flies fished by most anglers here seemed to work better. In faster water the classic flies performed fine. I found that light wire hooks seemed to penetrate the fish’s jaw better than heavy wire hooks when fish took in slow water.

Our Steelhead vs. PNW steelhead:

Although our fish generally behave the same as steelhead in the PNW, they do not go through the trauma of moving from saltwater to freshwater. Because of this, they continue to actively feed in the river and key in on what Kevin Feenstra and Dave Pinczkowski call “Meat” or “Protein.” They often prefer baitfish or sculpin imitations, and there is definite merit to this theory. As stated before, our fish tend to hang out in downright strange and counter-intuitive places in the river compared to western fish. I was often rather baffled by this until I realized that micro-structure in the form of an imperceptible log or boulder on the bottom or a tiny change in current speed or direction seemed to provide them with comfort. Above all, in the low clear water conditions, the depth of water seemed to be key.

One interesting discovery, which was totally contrary to what I had believed before, was that lake-run brown trout could be caught on swung flies with the dry line. I always did best with browns when I used big flies near the bottom, but I did catch two browns on classic flies that were fished just beneath the surface. Strange…

Swinging flies with a dry line and trying to gain depth and have my fly in the fishy zone was very challenging and a rewarding learning process. Timing mends and planning ahead were important. I found that the majority of my fish took on a greased-line presentation. Here the fly is presented as close to broadside as possible to present the full profile to the fish. The takes were different too. I rarely get a fish to boil on the surface when grabbing my fly if I am using a sink tip, but many of the fish I did get managed to erupt in the water.

There were some runs where fishing the floating line simply put me out of the game. In one run that I fished 10 times without a pull, I studied what was happening with the fly. A fast and narrow chute of water is bordered on both sides by back-eddies. Trees line the run overhead, and downed trees line the shore where one must cast. Screw up and you lose the fly. Cast too short and you are not even in the holding water. I had to cast between branches and place my fly into the shore back-eddy. The fly sank, but then the faster surface currents in the central chute badly bellied the line, and the fly went racing downstream. No matter how I tried, I could not manage to mend the line in order to allow the fly to sink and swing slowly enough. A put on a sink-tip and voila, I immediately caught a steelhead. So, some of our little ditches of runs are best fished without a floating line. In these same areas, one could use a spinning rod to even better effect.

I did consistently catch fish, but did not catch as many as other fishermen of the same skill level. Several days I got skunked completely. I had to limit myself to less water and steelhead that would freely rise to the fly. This can be a lonely path to walk when guys stroll past and without introduction, tell you that they caught 6 or seven fish to your one or none. However, every fish I did catch was a memory and discovery. Once I fished all day without result until at last light, I hit a nice fat arlee in a boulder strewn tailout. I landed the fish, smelled the fly, and walked off the river whistling a tune. I kind of prefer it that way sometimes.
Posted by Erik Helm at 2:14 PM