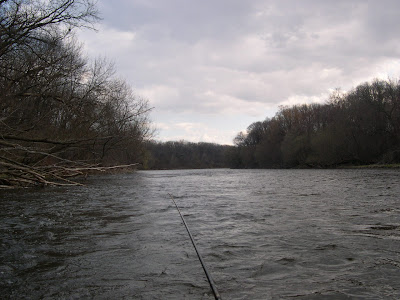 
Anticipation. Expectation. Hours of repeated confidence reminders. The Zen zone. Nothing, and more of nothing. Wading practice.


You see an eagle, osprey, owl, or fumble in your wader pocket trying to locate that half of a granola bar. It is then that we are most vulnerable. Mr. Steelhead often picks this very moment to strike.


The first occurrence happened on my first large steelhead. It was bank side squirrels rioting in a crunchy, leaf blanketed back yard that pulled my attention away for just long enough to… BUMP! TUG! WhirrrrrrrrrRRRRRRRR ZZZZZZZ!

My knuckles still hurt from getting in the way of that reel handle. I must have looked like a panicked juggler as I frantically did everything possible to lose that fish, but somehow failed.


My first steelhead on the west coast came when the sun rose above the canyon walls and I fumbled for my sunglasses. I actually had them half out of the case when the fish pounced on my spey fly. Glasses and clip-on sunglasses in one hand, rod in the other, I blindly squinted down river at the blurred scene of a chrome fish jumping and spitting the fly.


The typical scenario on a river goes like this. All full of coffee and in that zone of concentration, I fish for a few hours like a studious heron. I crouch, lift and reach my rod, mend attentively, and follow every nuance of the water. If a midge landed on my rod tip, I would feel it. I know exactly when and where that jolting take is going to occur. My fly tracks through the water like a poem on a mission.


Then slowly, after endless casts through productive water fail to produce, my mind starts to wander. I make a cast, and with my fly still swinging, take a photo, fumble with the wading staff, talk to a buddy, or watch wildlife.


There is also something about moving water, and the light patterns and reflections off the bottom that tend to mesmerize me. As the day wears on, I spend more time looking into the water than I do watching my fly.


One of the cardinal rules of fly-fishing is this; “If your fly is in the water, you are fishing.”

We all know this to be true from the times when suicidal or mentally challenged trout, panfish, or bass have hit our fly as it dangled in the water at our feet while we were picking out a wind-knot, or rooting around through various pockets.


A number of years ago, a partner had just landed a spectacular steelhead from a western river. I stepped up to the plate and began to strip out line. The fish had taken his fly on the other side of the river. It was going to be a long cast for me. I rolled out the fly, leader, and sink-tip, and stripped off more line. Suddenly all hell broke loose, and I was attempting to fight a steelhead just twenty feet from me with line everywhere. The fish came off of course.

The moral here is about that cardinal rule, but also that one should cover the water properly. Lord, all the things I have learned the hard way. However, perhaps those lessons stick in our brains better. A kid that reaches over a hot burner tends to equate fire and pain quite effectively after one lesson. I on the other hand am the kind of idiot that has a pebble in my wading boot for six weeks. With every step I mutter “Ow, ow, ow…” and so on. It never occurs to me to actually remove the offending pebble.


This past year I had a couple of wonderfully jarring takes when my mind and tongue were dedicated to something else. A nice hen almost yanked the rod out of my hand as I was asking a friend where his new puppy sleeps. “Does she sleep in a little box or in a cage by the …? *&^%$#@!!!!!! ZZzzzzzzZZZZZ!!!! Man, those Hardy reels can ratchet up a complaining song!


The same thing happened to me on my home river. Once again, my head was turned and I was yakking about some inane topic when my reel decided to play a Wagner overture at 125 decibels. The look on my face was one of shock and confusion.


I often wonder if there is something to this. Perhaps it might have something to do with being relaxed, or not trying so hard. In addition, the distracted take seems to lead to a higher landing percentage. This may be due to our inability to react and ‘screw it up’ at the time of the initial pull or take.


On the other hand, perhaps all the anthropomorphism is apropos; steelhead may have a sense of humor after all.
Posted by Erik Helm at 10:06 AM