Any one who knows me knows that I am a huge fan of the reels made over the years by Hardy Brothers of Alnwick (pronounced Annick). The Marquis, the St. John, the Lightweight series, the St. George, the Bougle’ and others possessed a simple utility and art that was so perfectly merged. They were not fancy, the finish was hand leaded and tended to make them look like antiques after a few years of use, but they just lasted and lasted. They may require more maintenance than modern reels, but many old Hardy fly reels are now on their third or fourth owner, having given service for multiple generations of anglers. The designs Hardy produced were copied far and wide. For a while at the end of turn of the twentieth century, to perhaps the 1930s, most reels on the market were copies, adaptations, or were heavily influenced by the reels of Hardy Brothers.

The Hardy reels still stood out in the waning years of the British Empire period because they had a unique feel and sound. When one picked up a Hardy reel, a glance and a turn of the handle to engage the check or ratchet, and one knew he was holding a Hardy.

The most popular, most widely produced, most influential, and perhaps still the best gear and pawl reel ever designed came out at the end of the 19th century. Designed in 1888, and patented in 1891, the brainchild of Forster Hardy was christened ‘The Perfect Reel.”
It ran on a ball-bearing race, had an adjustable check mechanism with a unique sound, and the back-plate turned to allow one to apply finger pressure to increase the drag. The first Perfect reels were manufactured by hand out of brass.

The Perfect was continually modified and improved, and by 1912, the body material was changed to various alloys of aluminum. The reel was lightened, and a new check was introduced: the famous ‘1912 ratchet.’

It is this version of the Perfect that anglers and collectors consider the ‘Perfect’ Perfect. It has a sound and power to the check that was never before or since duplicated. In fact, 20/20 hindsight would wonder what led Hardy to abandon the 1912 lever adjusted spring and single pawl.

Around 2002, or 2003, Hardy, now House of Hardy, decided to hand make a limited production run of 250 reproductions of the 1912 perfect in 3 ¾, 4, and 4 ¼ inches wide. All would be the wide drum salmon model. 200 were sold in sets of three, one of each size, and encased in a leather box, while 25 each were available for purchase individually, 25 in right-hand wind, and 25 in left-hand wind. They featured the original check or ratchet and ivorine handle, but added a faceplate that had a spitfire finish. This finish originated during the war, when materials for finishing became difficult or impossible to obtain. Each reel was finished entirely by hand, and stamped as of old, with the maker’s initials. 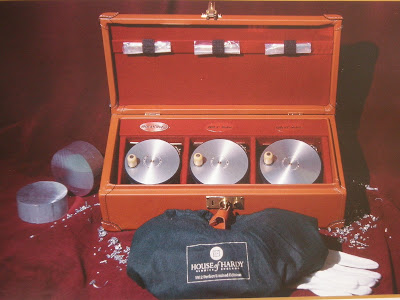 1912 Repro set. I took this photo of an old edition of The Art of Angling Journal
I have always wanted a Hardy Perfect reel. I came close to purchasing one several times, only to balk at the price at auction. I missed the time when a wide-drum salmon was easily obtained for a couple of hundred dollars.

Now I am glad I waited all these years. If anticipation counts for anything, my years of Perfect lust led up to obtaining more or less unexpectedly, what I consider the ultimate Perfect. Meet the 4-inch, left-hand wind spitfire finish 1912 reproduction made by Charlie S. Norris, Hardy’s head reel maker. One of 25 made for individual sale.
I will be committing blasphemy and actually fishing with it. After all, life is too short not to use the good china!
However, one of my leather reel cases will always accompany it, on the river or off. The hand finish is too easily damaged. The maintanance will be akin to a silk line, with the stripping of the line, cleaning, and drying, but all that love and attention will be worth it when this thing gets wound up by a fish.
I can hear it now... 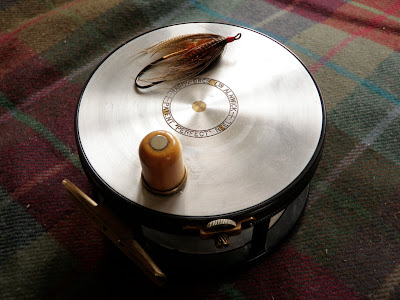 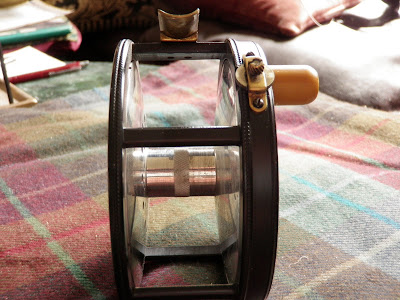 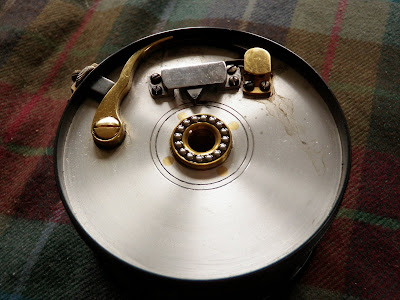