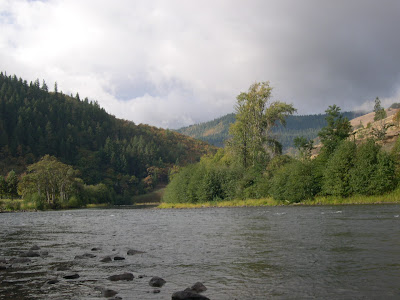 It has been written somewhere that the only single thing we can control as anglers on the river is ourselves: our timing, our approach, reading the water, presentation, etc. We cannot control the weather, the water, the wind, or the natural cycles of nature. We must instead learn to work with nature and fish in harmony. Once one progresses to a point where his or her presentation is decent, and can use whatever technique one chooses to cast and present the fly at the proper speed and depth, then the next step, I would argue is to fish with confidence.

This may be the most difficult barrier to get past in many ways. Firstly, we are thinking creatures. When something goes right or wrong, we tend to want to look to something outside ourselves for an explanation, often where there is none. We speculate on fly color and construction, the weather, sun, moon, rain cycles, barometer, what we had for dinner last night, and what brand of beer our buddy likes. Thinking and analysis is a good thing; it leads to discovery and learning. However, at some point along the way, our speculation causes us to begin a process, or turn down a cognitive road that is a dead end.

For an object example, let us take fly choice. In the world of trout, the fly has a huge part to play in the overall game. Trout eating bugs want to eat certain bugs, and when dining at the all-you-can-eat BBQ shack, Mr. Brookie does not want a plate of spinach. In the world of Atlantic Salmon and Steelhead fishing, the fish do not feed, or rarely feed, and why they take our flies is a mystery, and the subject of hundreds of speculative books and articles.

So, what fly to choose? Lets see… Dark day-dark fly, bright day-bright fly, blue under a full moon, yellow under a quarter moon, orange during a bright day, and green when you drank too much scotch the night before and peed in your waders. Small fly, big fly, fly with movement, most popular fly, favorite fly, etc. As hard as it is to grasp, the fish are far less choosy as to what fly is on the end of our leader than we are. Popular patterns such as the green butt skunk in the PNW, or the egg-sucking leech in the Midwest work because they are good patterns, but also, and here is the catch, they account for more fish hooked than other patterns because they are tied onto our leaders and in the water more than other patterns. Is the blue charm the best salmon pattern of all time? It certainly racked up the most kills in the fly category on many rivers in Scotland. Or, was it because although it undoubtedly is a good fly, somebody made his fame with it, and then, everyone started using it? What about the red and white daredevil spoon? It may have fallen out of favor lately, but for a long time, if you wanted to fish for pike, you had better have a good selection of these lures in your tackle box. Anglers used them, and caught fish. Then the newest plastic thing came along and they used it and caught fish too. See?

The fly in your box will not catch a fish. The one on the end of your leader will. Both Dec Hogan and John Shewey performed an experiment in which they changed their fly pattern every time they hooked a steelhead until they had gone through their whole fly box. Result…. All the flies hooked fish. Hmmmm… Perhaps it was that they fished with confidence instead of fiddling and fussing. Perhaps because they had confidence in the fly they had in the water, accordingly they fished better and more thoroughly?

This concept seems so foreign to us that it rarely sinks in. In a seminar on steelhead fly-fishing I covered reading water, presentation, timing, etc. The questions at the end posed by those attending had to do with fly choice and rigging. Funny.

At a western spey clave, a local guide gave an excellent clinic on fishing the river, and pressed home confidence in the fly, covering water, angles, structure, etc. At the end an old guy stood up and asked…. Drum roll please… “What is the secret fly?”

If you had asked the anglers seated at the seminar along the river what fly they caught their most recent fish on, I bet good money that most of the flies would be unique. I have traded flies on this river with some great anglers. None of our fly boxes looked alike, and we all had success. Funny. Could it be confidence? Could it be that the only secret was to choose a fly based upon actual water conditions and just leave it on?

Once one gains confidence in the fly, one begins to pay attention to other critical factors like water speed, angle of cast, mending, water structure, etc. Bingo! Then the fly becomes magic. Now we turn down another blind alley. We have just had a great day on the river fishing a (insert fly name here), and we only have confidence in that fly. Thus the red and white daredevil, the green-butt skunk, and the egg-sucking leech are born into legend. We don’t like to hear these things, because we want to grasp a hold of a simple concept to boost our confidence, or provide an excuse for failure or our personal agenda/expectations unmet.

Thus, it is that the things we can actually control, our casting, presentation and confidence outweigh all of the other factors on the river. This includes all of the old wisdom out there such as steelhead will not take a fly with full sun on the water, don’t fish after a full moon, a falling barometer, a rising barometer, after your buddy belches twice, etc. All of these things (except the belching) have effect on our fishing, but nowhere near the effect we attribute to them. Seeking to understand, we speculate and look for reasons.

What about the un-carved block? The newbee angler that does everything wrong but catches fish anyway until he or she learns the proper way from those with collected speculative wisdom? I was that angler once. The first trip out to the PNW, I fished a beautiful river. I used classic spey flies such as the Lady Caroline, and classic hair-wings. I fished an intermediate tip. I fished runs backwards and caught fish in the wrong places. I simply had absolutely no idea what I was doing, but put my joy, passion, and confidence in the fly, and spent more time on the water than most anyone else. When the water went off-color, I went fishing. When it turned hot, I went fishing. It was only afterwards, after meeting guides and experienced anglers on the river that I learned that I could not catch fish unless I was using a deeply sunk fly on a sink-tip, the places I pulled fish out of were no good, and it was useless to fish during the middle of the day. Oh…

The next year, armed with my newly acquired wisdom of the sages, I fished a big marabou fly with a sink-tip and…. I caught fish too. Hmmmm…..

I expect that if one placed all the collected wisdom of anglers that have put in their time on the rivers, that every speculative theory could be de-bunked. That is, for every theory and the speculative evidence behind it, there would be another conflicting or countering theory. That is not to say that all fishing wisdom and theories are bunk. Quite the contrary, most are based upon sound experience. It is when they become dogma that they often lead us down a path that may be classified as a self-fulfilling prophecy. “Don’t fish after a boat goes through the water.” O.K., we don’t. What happens? Well, of course we don’t catch fish. If we do fish, then the sense of confidence in the water goes away… because a boat went through. In essence, we play the part in fulfilling the prophecy we proclaimed or believed in. Our actions led to the expected result. Like a science experiment in reverse. Proclaim the conclusion, and then work backwards with the hypothesis in mind the whole way.

Nevertheless, alas, we all grasp for straws when the going gets tough. Positive straws, negative straws, but straws the same. The fly, the sun, the bad luck of a circling raven. Perhaps because this gives us confidence also: confidence to find another reason for our success or failure outside ourselves. A reason to attribute and then find peace in. I often wonder if my friend Og, the fictional Neanderthal that lives in my basement might actually be the ideal angler. He can reason up to a certain point, and perhaps that is enough. Cast it there, swing it so, and have confidence. Perhaps everything else is, and should be a mystery to a certain extent?


Sometimes our overactive brains get in the way of our instincts and senses. We don’t fish the ‘Eagle Run’ anymore because, three years ago we fished it, and given our thought process at the time, it fished too slowly or was too shallow. This year, due to angling pressure and the fading light of evening, we find ourselves pulling over by this run by default. “Might as well fish it,” we think, rather than just go back to the tent. Then we realize that this run fishes wonderfully. “What was I thinking?” we ask ourselves as our renewed confidence results in a great grab and nice fish.


I am reminded of the old (perhaps Norman Rockwell) painting of a fly angler fussing with his leader and fly selection as the trout are jumping around him. His face is turned with jealousy and surprise to a small boy on a bike pedaling innocently past with an old stick as a rod, a piece of string as line, and safety pin for a hook along with a tin can of worms and a glorious stringer of fish. That may be something to reflect on. Not that experience and speculation are not good things, but sometimes getting back to the essence may be necessary. Once the essentials are down pat, just fish with confidence.

Perhaps that would be no fun though. It might cut down on late-night philosophizing around the camp-fire.
Posted by Erik Helm at 1:28 PM