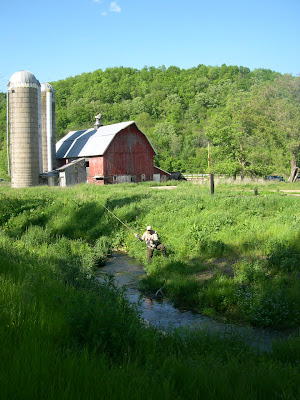 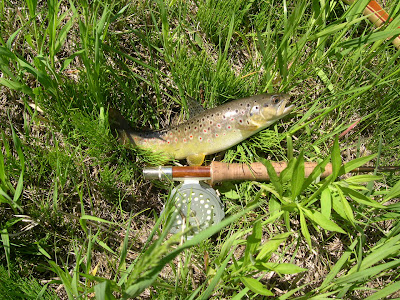 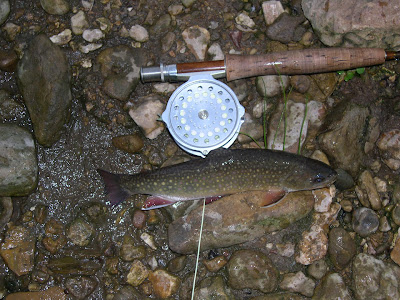 One of the inevitable questions I am asked when people find out that I fly fish is “Oh, you are a trout fisherman, right?”

I spend most of my time chasing steelhead and smallmouth, and I castigate myself every year that I never spend enough time on quality trout streams.
So, for the past several weeks I have been on a whirlwind tour of Wisconsin’s coulee region and its fabulous treasures of trout streams. The numerous hills absorb water and disgorge it as cold water springs. Almost every valley contains a trout stream. It is fondly known as the Montana of the Midwest. There are so many little rivers and brooks that it is difficult to know where to start. This region took a big hit in June of 2008 when the whole area flooded. Roads were washed away, and lunker structures ended caught in trees. Stream improvements were washed away or left high and dry. But, as with all nature, time heals all. In this case the rivers have bounced back with the help of many dedicated volunteers who rebuild stream stabilization structures by hand.

The fishing was tough. Sunny days and low clear water make for spooky fish. Hatches were sporadic and mixed enough that the trout were not consistently keying on any one insect. I fished beetles and caddis mostly. A size 14 X-caddis ended up being the most consistent producer. I nymphed when I had to; a necessary evil during the day when Mr. Trout won’t look up.

I landed some nice browns and brookies, nothing of great size, but beautiful little bejeweled fish wearing a whole palette of colors. Much of my small success was due to going off the beaten path and fishing waters less pressured and smaller than most people are comfortable fishing. Helping this process immensely was Bob Blumreich, who took time out to give me a small smattering of his immense knowledge base of the streams and techniques for small water fishing.

There is something of the primeval wild in the hills. Fishing alone and exploring in the silence surrounded by lush spring foliage and catching wild colorful fish was a reward on its own. If there is a temple of fly fishing, then I have been there and lit a candle to those who have gone before me. As always, the learning process was fun and rewarding all on its own. We spend so much time trying to figure out the whys of trout thinking that sometimes I believe it borders on anthropomorphism. Us sophisticated descendants of monkeys with brains that allow us to conquer nature and destroy ourselves pitting our active neurons against a little creature with a brain the size of a pea, and often coming up on the short side. Perhaps this is what makes trout fishing special. If we were able to simply go down to the river and clobber the fish, it would take on all the excitement of meat gathering, and lose its mysteries, and thus, its appeal.

One must be happy just being able to fish and experience the coulee streams, even if the reward is a lost fish and a missed opportunity. Restraint is a good thing.

As usual, yours truly is followed by minute disasters. A lens popped out of my glasses deep in the woods on a secluded stream, and in order to get back to the car, I repaired it with 4X tippet material. I lost numerous fish when after a nice accurate cast, one of the dozen deer flies that were circling my head would inevitably land on my hand or face just as a trout rose and ate my fly. There seemed to be two kinds of flies, deer flies and ear flies; the latter preferred the canal of my ears as habitat. I stepped in holes and twisted both ankles, hooked every species of flora on my back cast, and communed with cows and cow pies.

I met few angles on the streams, as I prefer to fish alone and not in the immediate vicinity of others. Fly fishing is not a team sport, and it always amazes me how many people only fish with a buddy that is in the same pool as they are. I did run in to one mature husband and wife on one of the popular rivers, but they were less than friendly for some reason. No reason for that, life is too short my friends.

As a trout fisherman, I have a long way to go, but it is amazing how instincts can kick in on a stream, and how one can adapt if one uses the thinking cap and always questions their approach. Critical thinking skills apply here as well. Part of me is happy to come from a smallmouth background prior to trout fishing. It seems easier to make the transition then the other way around. Much of this fishing can be described as my friend Joe S. puts it as “Bass bugging for trout.” Hitting shoreline structures with splatty quick presentations vs. the eastern catskill methods of long drag free drifts.

Small streams, small rods, small flies, but it is the small things in life that often get overlooked, and are under appreciated. Holding a foot long brook trout in hand as carefully as a newborn infant, I marveled at the scale of minute beauty in this world. Beauty and happiness are where one finds them. I find them in moving water. As the famous line from Casablanca goes, “I think this is the beginning of a great friendship.” Ah…the coulees!
Posted by Erik Helm at 11:12 AM