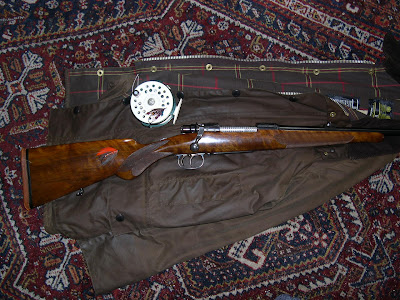 
I was reading recently of a description of sport (hunting) in colonial Kenya during the British empire period of the 19th century, and began to reflect on all the nuances of the definition of sport, and why it’s practice has engaged man for centuries. For this article, I will limit sport to the pursuit of game in a natural setting.

For definition, the sporting tradition, especially the British version that we inherited from fly fishing has a number of inherent characteristics.

First is the pursuit of an animal, be it fish, foul, or beast in a natural setting. In this sense, 19th century sport may be viewed as a gentleman’s way of affirming man’s position of dominance over other animals; a theme of western tradition and Christianity. Sport as practiced by many could be looked at not incorrectly as a simple gratification of the ego of both the individual and the species.

Second is the restraint of that power or the limitation of its use. If man wanted, he could slaughter every beast of the land and river, and in many cases, we nearly did. The sporting gentleman employed tactics and equipment that gave him the upper hand, but also allowed for a fair chance of escape. Thus, the sporting gentleman used a bolt action rifle instead of a machine gun or poison. The angler used a rod and angle instead of a net. This restraint only went so far. The end of the game was blood. It was playing with your food, but only for so long as the thrill lasted. 19th century sports used as much restraint in the kill as they did in making frivolous wars. This restraint was and continues to be a subject of debate and differs radically in interpretation and scope. For example, in Britain it was and continues to be a sporting tradition to conduct driven shoots. Wealthy country gentlemen, esquires, and manor borne sports lined up on vast estates with double guns and gun caddies while the drivers walked along waving flags and clanging bells, driving the foul that had been fattening up all year relentlessly toward the waiting shotguns of the ‘hunters’. The resulting carnage was considered sport. For hundreds of years the British have considered the classic fox hunt as sporting. Here priceless horses are ridden in pursuit of a fox being chased by a pack of baying hounds. The fox either escapes, or is torn to pieces by the dogs, while the gentlemen and now gentlewomen retire to the clubhouse to partake of aged sherry and cognac. These are just two examples of why it is dangerous to over-romanticize our sporting heritage. One man’s sport may be another man’s slaughter. What was true then is still true now.

But, for every example of excess, there were those that conducted themselves with class and practiced their sports along an acceptable set of rules that defined restraint. Thus the chalk streams were dry fly waters and low be born the man that dredges the subsurface with a wet fly. A single hunter stalking his game was accorded a greater achievement then a driven shoot, especially if the weapon is small. The ‘fair chance’ and ‘minimalist’ approach became the ultimate in sport. We fly fishermen take this to an extreme by using a single hook covered in feathers and fur and pursue one fish at a time while stalking the stream. Many fly fishermen may view the bass tourney types using sonar, radar, ultrasound, lasers, gps devices, satellite dishes, and fish scent as aids to their catching as less than sporting.

Along with restraint goes respect. The person that does not respect the game he or she chases will not become a steward of the game, the river, or the environment. Respect is seen in the way many people dressed and conducted themselves when chasing fish or game. Respect is seen in the intricate and beautiful hand ties salmon flies that were cast out into the river as an offering of beauty and a prayer or hope for return in the form of a chrome bright salmon. Contrast that with the wholesale raping of spawning fish by ‘fishermen’ with glo-bugs and we begin to see that respect and restraint define the gentile sportsman.

Third is the culmination ceremony where the head is mounted or the meat is consumed. Here we modern responsible sportsmen may engage in catch and release; the releasing of the fish is the symbol of the ultimate restraint.

Sporting should not be compared with food gathering. Gathering meat through the use of nets, baiting, driving, etc. is a necessary part of our ability to feed ourselves. No one should look down their nose at meat gatherers as not sporting, as well as in reciprocity those engaged in gathering meat should not refer to their activities as sporting.

What is sporting is a debate subject to all forms of extremism and debate. Taken to its absurd conclusion we have the character of General Zaroff in Richard Connel’s The Most Dangerous Game, who having become bored with his hunting big game with smaller and smaller weapons, as to increase the sporting chance, finally is driven in his fanaticism to begin hunting human beings.

Some fly anglers only use cane rods and silk lines, and may look askance at people that fish with graphite rods. Some anglers restrain their kill, but will sometimes take a fish for dinner. Others that practice strict catch and release may consider this barbaric or irresponsible. The bow hunter may see his restraint and the difficulty of mastery of his chosen weapon, as well as the limited range of approach and stalking skills thus mandated, as inherently superior to those hunting with high power rifles. This kind of debate and search for identity is normal, but one must always remember what it is that we are doing out there. Chasing things. Chasing them as we have for thousands of years, just with a more enlightened approach, a greater sense of respect, and the proper restraint.
Posted by Erik Helm at 1:47 PM