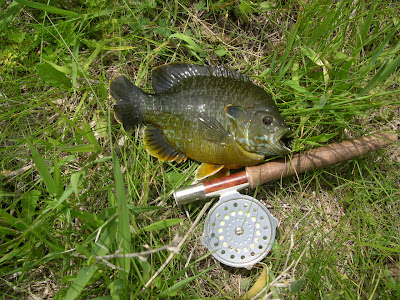 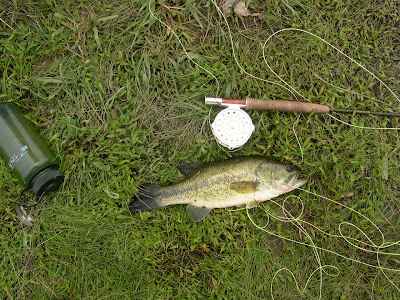 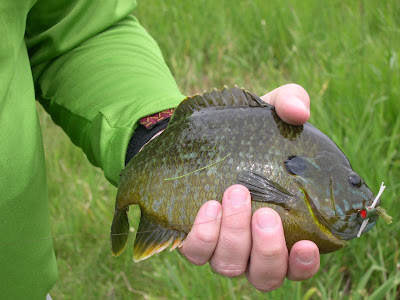 I would make the argument that the fly rod is the ultimate panfish and bass angling tool.

Presenting small artificial food objects and making them twitch and move seductively to cooperative fish is one of the joys of fly fishing that so many people pass up. On a trip to an area pond recently, the bobber and worm anglers were skunked and went home, while my friend Eric and I cleaned up. What was the difference?

I learned a few things about presentation this last week. Instead of casting out my small poppers across the water, I began to cast them at the water like one would splat a beetle against cover on a trout stream. This made all the difference. I was able to hit the water with the small popper, make it splat, pause for a few seconds, pop it, pause..., pop it again, and then make another cast to new water. The bass liked any gap in the weeds, and often were tight to shore and cover. Instead of 75 foot casts, we were making 15 to 20 foot casts. Interesting...It was like target shooting. Once we figured it out, it was almost unfair as the fish became unglued in their exuberance to eat our poppers.

This leads me to another thought on fly fishing. More than any other angling technique, it is a thinking man's sport.
The discovery and questioning/exploring/learning process is as fun as catching fish. A trip is often ended with the words "Well, we figured it out!" I saw this in Lake Michigan recently where I took my friend Eric to fish for small rainbows holding in a heavy outflow. The local fishermen were trying to throw slip bobber rigs, crank baits, and worms to the fish holding in water that has the characteristics of a river. Some of the bait they were using was the size of the fish being pursued. We analyzed the situation and used small streamers swung in the current to successfully catch the fish. The locals were not very friendly.
All we had done differently was to actually analyze the situation at hand. It made all the difference!

Anybody can do this. Just get a cheap flyrod combo, a bunch of poppers and small streamers, and go exploring.
Let the learning begin.
Posted by Erik Helm at 11:29 AM