Some flies of the summer runs 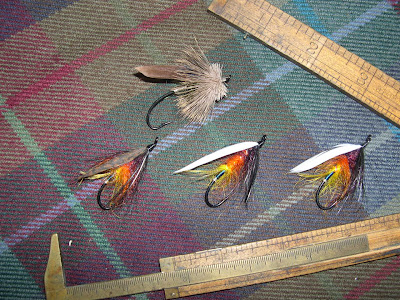 Some flies of the summer runs

I love to fish classic Dee flies. They have a grace and charm unequaled in the world of flies. Dee flies are large winter dress flies tied on very long hooks, so application as a summer fly is limited. The solution is to reduce the fly. Here are three Dunt Dee flies. Two have white wings and one a more traditional turkey wing. I used dyed black golden pheasant feathers for the hackle, and wound in forward of the dubbing as one would in a hairwing. The reason for this is that with a shorted shank hook, it is difficult to place materials without becoming over-dressed. You know… overdressed! Like wearing a suit, three T-shirts, two rain jackets, and a top hat crowned with a sun-visor. Summer flies should be dressed lightly. The dubbing for the bodies is Angora goat and SLF blended, twisted in a dubbing loop, blended again, and wrapped forward. The hook is a size 2 salmon iron.

Then we have the muddler. A number of years ago Royce Dam, 1994 FFF Buszek award winner for lifetime achievement in fly tying explained to me what was wrong with most all commercially tied muddlers. A muddler is a simple pattern designed to ride in or just below the surface film imitating some sort of small baitfish. To achieve the effect of a baitfish outline, deerhair is spun to form a head. The original muddlers were fairly lightly dressed, but in subsequent versions the deer hair began to be packed tight in several stages to form a tapered head. Deer hair floats. Additional deer hair increases floatation. What the modern muddler did was to effectively become a sort of mini Dahlberg Diver. In order to sink the fly, tying companies added weight.

Royce told me that the original muddlers had a single turn of deer hair for a head, and were NOT trimmed. One had to very carefully stack the hair prior to setting the head, and then carefully make just one single flair and spin of the hair. The resulting muddler sort of pushes water while being free to sink if a heavy hook is used. I tied this one more as a waker on an Alec Jackson hook. I have been using this fly for awhile to test it, and it seems to perform as designed. Thanks Royce!
Posted by Erik Helm at 11:31 AM