Sucking the marrow out of life 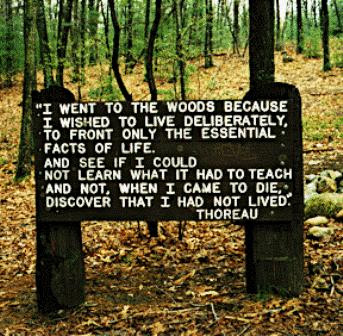 I found this little gem yesterday while editing some of my work to submit for publication. It was written in late 2008, and predates some other essays touching on the same themes. Kind of interesting to see ideas emerge. I don't know how to classify the piece. It is not an essay or vignette, more of a train of thought prose. Not polished at all. Rather raw. I wanted to edit it, but decided that it needed to stand on its own. E.H.

Sucking the marrow out of life.

Children no longer look at clouds.

Our society shelters us to such extent that the average 20 year old today could not survive in the world of the 1930s. Nature has become a stranger, and man has built walls removing himself from his environment.

The best days I have had in life have involved adventures. Not adrenaline surged gnarly DUDE maxed out, but more like quiet discoveries alone in nature: being stuck in a river during a rainstorm, getting lost in a mosquito infested swamp while trying to explore a tiny trickle for wild brown trout, rowing a river after dark, collecting a leaf sample or a wildflower, finding a great horned owl. In other words, prying under the rocks of life to find out what is under it all.

A day where I don’t get muddy is a day wasted.


A friend of mine who I am quoting anonymously wrote:

“I just like it better knowing what it’s like to be alive. Truly alive. Scared, cold, sweaty, tired, sore, somewhat lost in the woods. Chasing, on foot only, that elusive mule deer or elk with longbow and arrow. Steelhead with classic methods…..Even better when the mood strikes to run with a hand-made cane rod, silk line, and hand made fly reel.”

Perhaps it can be thought of as living closer to life. Grow your own food, cook your own meals, hunt, fish, be inquisitive, know what lives under that rock, get wet and muddy, wear a strange hat, take a book into the woods, eat an entire meal made up of things growing wild, peer into holes, stick your head under water and look around, build a shelter and stay the night in it, build a fire from scratch, perhaps even go an entire day without touching an electronic digital device.

The best apple I ever ate came from a wild apple tree happened upon during an autumn walk.

To know the wildness of nature… to be uncertain… to be afraid but calm.
To know the cycles of life and death.

To slow down.
To look.
To listen.
To learn.

To know restraint.
To smile at a sound or a smell of nature.

To go against the crowd.