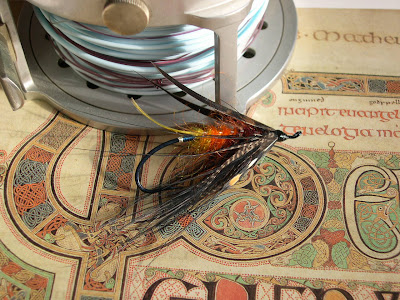 Another Dee fly, this one is named the ‘Dunt’

According to Kelson, the Dunt originates with W. Murdoch who contributed to the Fishing Gazette, and wrote the book Moonlight On The Salmon.
He (Murdoch) says of the fly “There is not a better all-around fly of the plain sort than the Dunt put upon the Dee in spring or Autumn.”
The Dunt is a bit more somber fly than some of the loudest and brightest Dees, but still has inner body colors that glow through the long waving hackle.
I tied this one with dyed blue eared pheasant and used a more traditional scissor-wing style with turkey feathers. The body is yellow blending into orange and claret seal substitute. I used angora goat. This is the dressing according to Kelson. The original dressing probably was orange blending into fiery brown.
The word ‘Dunt’ according to the Imperial English dictionary means ‘to strike a blow or a blow’, but the actual origin of the name comes from the Scottish idiom for the “Proper thing”, a “Proper Dunt.”
The background is a plate from the Lindisfarne gospels.

Here is an excerpt from the fishing gazette written by Murdoch;
Dawson is responsible for the invention of several flies. Seven years ago when he was fishing the Kineskie water we used of an evening to drop down to see him work, and have a chat with him in piscine and piscatorial matters. When we got down to the river we used to call out to him from the top of the bank, “Have you got anything, Dawson?” and invariably his reply was, “O ti.” “What did you get him with,” we then queried, and he used jocularly to reply. “The proper dunt.” This led us to invent a fly which we christened the “Dunt,” to perpetuate Dawson’s “Proper Dunt,” which means the “proper thing.” That the Dunt has proved the proper thing no one will deny. It is a particular favourite everywhere on the Dee, and in one day more fish have been killed with it by one and the same rod than any other rod has got with any other fly in one day on the Dee within the last seven years – to wit, nine fish by Lord Strathallan on the Cambus O’May water some years ago in the spring.. MAC.
Posted by Erik Helm at 11:38 AM