As promised, I have started tying hairwing steelhead and salmon flies again.
There is something about the simple elegance of these flies that intrigue me. They are relatively easy to tie, and sit in the water like nothing else. The hair acts as a catcher of the current, and rights the fly. The heavy wire hook acts as an anchor. You don't see these flies fished as much as in times past. In the day, lets say the 1940s through the 1980s they were predominant for steelhead in the PNW. Now all one sees are Temple-dog flies, string-leeches, tubes, and flies with a lot of motion that are 2-3 inches long. I catch summer-run steelhead out west with these flies in size 2, 4, and 6. Believe it or not, the fish do come up for them! On our local waters, given that the water is clear enough, they often get the nod as well. I like my hairwing flies to be traditional, not too bright, and with little or no flash. I like traditional materials too. It is also amazing how quickly the larger hairwing flies sink. One can fish the waters around here with a dry line and a 1/0 hairwing with ease. In effect, a hairwing is a reduced and simplified version of the late 19th and early 20th century featherwing flies. Hairwings originated in England, Ireland, and Scottland, but then were later adopted for North American Atlantic Salmon and finally Steelhead. Tiers such as Syd Glasso, Walt Johnson, Ed Haas, and Dave McNeese, amongst many others took the concept and ran with it. I tend to disdain the use of chenille as well. I prefer wool. Several years ago I procured about 30 patches of Merino wool from Royce Dam. I dyed them with Veniard and RIT dyes, causing my kitchen sink to sport lots of colorful spots...oops! The dying was fun, but was really intended to supply me with colors that I could not find. Kingfisher blue, rich yellows, and highlander green were first on the list. I started experimenting with blending the wool colors by hand much as was done in the 1800s with 'Berlin Wool'. This allowed me to achieve that hard to find look of olive and brown mix in a Lady Caroline. Wool dubs extremely easily, and sits flat on the hook, unlike seal or it's substitute. Seal has it's place too, but some patterns call for a more svelte body style.

So, here are some hairwings and their origins and commentary. Part one of a series. 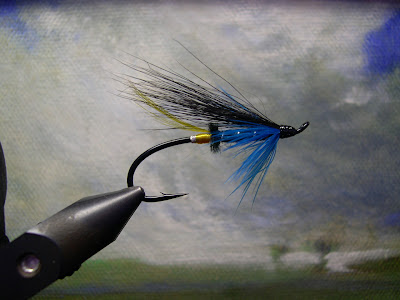 This is one of the most famous Atlantic Salmon flies in history.
In Sylvester Nemes' book Six months in Scotland, a book is detailed which recorded which details the fishing of one Sherrif Dallas, who fished primarily the Dee. He used greased line tactics, and knew AHE wood quite well. According to the fishing log, the Blue charm killed 38% of all the fish caught on flies! Of course, it might have been because he had that fly on his leader and in the river more than any other, but, it does make one think.
The fly consists of a black wool body, silver tag and ribbing, yellow floss butt covered with golden pheasant crest, and blue collar hackle. The wing can be any shade from brown to natural fox squirrel. I used black bear just because. In my experience, it is an excellent 'low-water' fly. 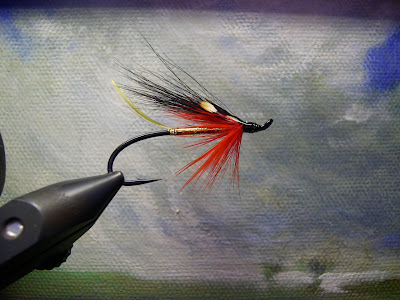 The next fly is the Gold Demon.

This fly is an early example of North American hairwings. It shows up well in off-color or high water, and may have been intended as a winter fly.
It has a body of gold tinsel ribbed by gold oval tinsel, Hackle of orange, a golden pheasant crest tail, and wings of brown to tan, depending on which book is consulted. Jungle cock nails are optional, but do help with the overall lines of the fly. It sinks fast due to less water resistance. 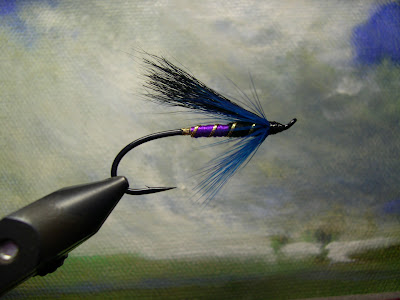 This fly is called the Autumn Twilight.

The Autumn Twilight is an original clear or low-water pattern by your's truly. I have landed the largest steelhead of my life on this fly. When the water wraps the blue hackle back over the black and purple body, it glows very subtly while not being too bright. It is a good Deschutes type pattern, but I also have hooked fish in Wisconsin water with it in a larger size.
The body is purple antron floss and black wool in near equal proportions ribbed in gold oval tinsel. The hackle is kingfisher blue, and the wing black dyed squirrel. black bear, or kid goat. This one sports a kid goat wing. 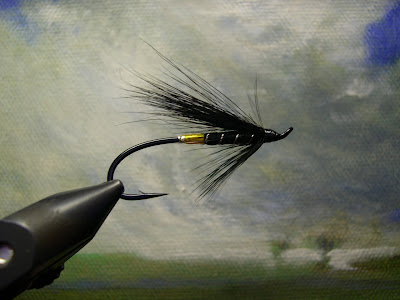 The next fly is the Green-Butt Black Bear.

Again, one of the most famous flies and very effective, the Green-butt Black Bear (or the yellow-butt as I tie it), is famous on the Miramichi for Atlantic Salmon. It is tied both with a tail and without, as well as 'cossboom style' with the hackle in front of the black wing. An excellent low-water or clear-water pattern, it is primarily black, and shows up well in the water. Iuse yellow floss for the butt because I find neon-green to be too modern. Once again, the body is of wool, the wing of Black Bear,and the hackle is black saddle. 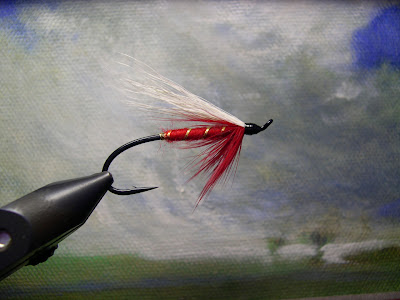 This fly is called the 'Patricia' and is tied by Randle Stetzer originally for use on the Deschutes.

It is as simple a hairwing as possible using red and white as a color scheme. The body is red wool ribbed by medium gold oval tinsel, the hackle is red saddle, and the wing is Polar Bear or substitute. Very similar to some flies tied by Ed Haas. 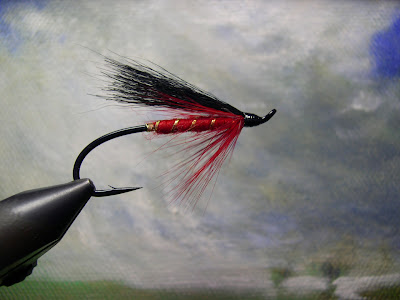 The final fly in this first series is a varient of the above 'Patricia' and sports a black wing in place of the Polar Bear. It is called 'The St. Estephe' and is named after a wine region. It's popular colors of claret and black assure us that somewhere this fly is named something else as well. Once again it is a versatile pattern.

That is it for this post. More later, have to get to the vise! I wonder what hairwing I should tie next?
Posted by Erik Helm at 11:33 AM