Scenes from the tying bench, new books, and musings 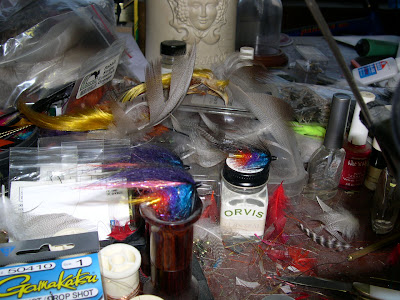 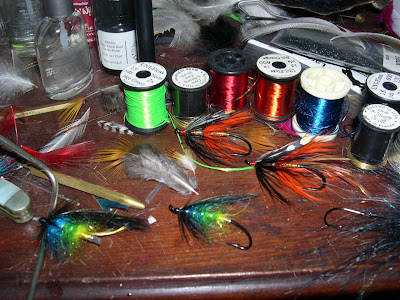 First, it is interesting to note that this blog reached over 1,000 visits in November alone…so the five of you that read it need to get a life;) In sincerity, thank you for coming into my little corner of the world, and reading my musings.

Here are some pictures of the cluttered creative area known as the tying bench, a.k.a. the dining area.
I wish I had more drive to create, but now with the rivers freezing solid as daytime temps clime only into the twenties, I should have more time to spend with fur and feathers. I have been on a tube kick for awhile. Prior to that, I was into tying small 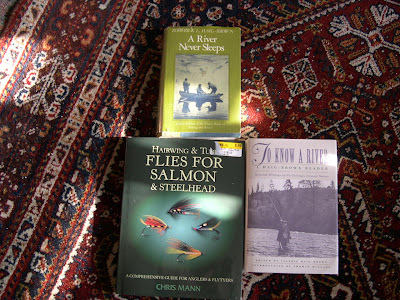 traditional featherwings for summer steelhead. Way back when, I was known as mister hairwing. I still have unopened packages of polar bear and black bear fur. By the way, there is no substitute for bear. Wonderful stuff to work with. Squirrel works extremely well, but is slippery and hard to get to stay on the hook. I have had squirrel winged flies fall apart too many times to have complete trust in it. Kid goat makes a great substitute if you can find it in proper length.
I think this week I may go on a kick tying traditional hairwings in sets.

I have some winter reading set aside. I obtained A River Never Sleeps and To Know a River by Roderick Haig-Brown, The first being a month by month description of angling in British Columbia and the England of his youth, as well as musings and anecdotes. It is amazing to find that so much of what we think of as modern innovations have been around for many years, including grease lining for steelhead with the two-handed rod as far back as the 1940s. Every generation seems to think it invented sex, forgetting how it got there to have that thought in the first place. The second book is a compendium of Haig-Brown’s works compiled by his eldest daughter, Valerie Haig-Brown. Both were purchased from Alibris, an online book retailer specializing in books that are rare and out of print. Haig-Brown is a fine writer, very literate, descriptive and philosophical. Very in-tune with his natural surroundings.
Another book I just picked up at Half-priced books is Chris Mann’s Hairwing and tube Flies for Salmon and Steelhead. It is so full of inspiration that I should be in heaven for awhile. On a side-note, I also found a copy of Bruckners 3rd and 8th with Szell and Cleveland for only $8.00! It pays to snoop around the used bookstores! Another reason that I like used things is that they have legacies attached to them. I wonder who read them before? That, and the fact that the carbon footprint has already been made, and I am not contributing to any more waste.

I have been reading the interesting discussion (it got a little hot) between Dag and Ed Ward on the Speypages regarding the origins of Skagit casting vs. Scandinavian underhand style. It reminded me of the infinite differences in casting technique evident even in this little corner of the world. Dave P. takes it slow and has a lot of body tilt and rock and a high stop with an arcing cast. He loves to cast off-hand. Cory T. takes it slow as well, and has a very pronounced stand-up-straight style with a low bottom hand stop on a Skagit cast. Mike P. has one of the fastest Skando casts I have ever seen, and delivers the fly where he wants it every time. Rick F. casts differently too, with a powerful forward sweep of the rod. BEK takes it slow, the consumate Skagit man. Rob E. casts faster than all of us. He uses nearly only his lower hand to power rods that are stiff as a board. He casts extremely tight loops. I like moderate rods now, ones that I can actually feel load so that my timing is more aware of feedback from the rod. I have developed a strange habit of having my upper hand quite a bit down into the grip of the rod. We are all different casters, using the same tools and different individual style variations to get to the same goal. It is fun to watch all of us cast, especially when I finally break out of a casting funk and power my fly into a tree on the opposite bank, cast my hat into the water, or spend the whole day with my Skagit line on backwards. I wonder if any of you guys do anything as crazy… Seriously, I must win an award for the most inconsistent caster around here.
Its all good, right? But, in any group of obsessed idiots there are always the requisite arguments. We are not alone. Every year, egos are damaged and enemies made for life, groups fragmented and physical injuries occur at comic book conventions, model train gatherings, historical recreation events, etc.
We are all nuts. Skagit vs. Scando; traditional long bellies vs. short bellies; shooting heads vs. whatever; running line arguments, debates over click and pawl vs. disk drag; Fusion of techniques vs. purists defending the ground of something invented only a few years ago.
I kind of long for the days when there were only two or three rods to choose from…well not really;) I like the freedom to explore styles and equipment.
Believe it or not, we are all still learning, and making up much as we go along, even strange casts to be able to put a line out in the story pool while under the trees.
Perhaps we should debate who is better, Wonder-Woman or Aqua-Man?
Posted by Erik Helm at 11:48 AM