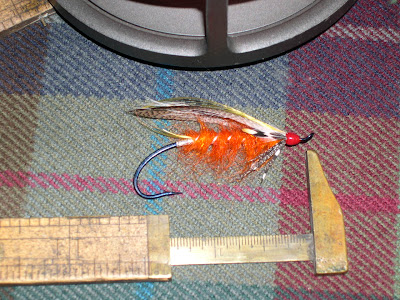 A fly, some thoughts on literature and flyfishing through the years, and some quotes.

First, Here is Harry Lemire’s Golden Edge Orange. Elegant and simple, it has Lemire written all over it.
I used a mix of angora goat and SLF in hot orange for the body. The wing is gray squirrel under and bronze mallard over topped by a golden pheasant crest. The cheeks are tiny jungle cock nails. The throat was fun. In order to get the small profile and amount of guinea I had to use a technique new to me. There are dozens of ways to tie in gadwall, teal, guinea and other fowl feathers as a throat. I used a wedge shaped piece tied in from the bottom of the hook, and pulled upwards until the fibers adjusted correctly. I found the technique in an older British tying magazine. Always nice to learn something!
I coated the head with red varnish and two clear coats to achieve a translucent look.

I have been looking through my flyfishing magazines, and reducing them to a manageable size. In doing so, I found some interesting discoveries. I threw out most all of the more recent Fly Fisherman magazines, and only saved a few articles here and there. However, I saved the few issues of this periodical that I have from the 1970s and early 80s, which a customer gave to me a few years back. The older issues were full of excellently written articles full of insight, subtle humor, and romance. The ubiquitous ballcap and sunglass era was yet to come. The quality of the English language used was surprising. Even the letters to the editors were literate. As the years went by, the writing was replaced by more and more pictures, and the actual written content shrunk until there was no point to retaining them. I no longer subscribe to any fly magazines.
In these few issues Don Zahner wrote about the last fly rod at Abercrombie and Fitch in 1978, a requiem to a fine sporting goods store, who’s name would be blasphemously resurrected to sell sexed up clothes to pre-teens. Lee Wulff revealed the history of the fly vest, complete with pictures of the first prototypes.
Nick Lyons, Ted Niemeyer, and Eric Leiser wrote articles, and Ernest Schweibert graced the pages with his timeless wisdom. Deke Meyer wrote of simplified Spey flies in 1984, and in 1977 Bill Bakke wrote about riffle-hitching wet flies for steelhead. Classic stuff.

However good the articles were, the advertisements were a trip through time. Ugly and obviously badly built Martin reels were touted, Irish country hats offered for sale, and every angler seemed to smoke a pipe. The first Columbia vests were shown, and man were they ugly. The guy in the advertisement didn’t help either, as he looked like a cracker, complete with bad greasy hair. Pflueger claimed that their new Medalist was “Engineered to be the finest fly reel in the world.” Perrine offered their automatic reel, a product that older flyfishers remember with a shudder. Although Perrine actually made a pretty good automatic, the cheaper knock-offs available at local hardware stores often exploded during use, dropping small parts into the water. They started rusting the second you left the local sporting goods store. Vintage tackle was offered for sale and the prices made me laugh out loud. A good Leonard or Payne cane rod would run you around $200.00 and you could buy a Hardy Perfect for $70.00. The best one was a Vom Hofe 6/0 salmon reel for $120.00!

“It is interesting to note, for what it is worth, that our country has never fought a major war during the administrations of presidents who were fly fishermen: Grover Cleveland, William Howard Taft, Teddy Roosevelt, Calvin Coolidge, Herbert Hoover and Dwight Eisenhower. In fact, we seem to recall that practically nothing happened during the administration of President Coolidge!”
(Editor’s note; George W. Bush must fish with spawn…)

“ Weigh-ins are for prize fighting, not for fly fishing. If God had intended trout to be weighed, He would have given them bigger scales.”

While on a bass fishing trip in the Ozarks, he and a fishing partner discover a horrible odor in their camp cabin and trace it to two pairs of waders and rancid fishing clothes abandoned in a closet, which leads Don to write “This adds new depth, if only by paraphrase, to the oft-repeated pronouncement of the venerable Dr. C.M. Henshall about the sporting qualities of his favorite game-fish. Thus we can state that, without qualification, inch for inch and pound for pound, smallmouth-bass anglers are the gamiest fishermen in the world.”

“We should accept gratefully, and without vanity, the fact that some of us have developed the finely honed sensibilities that ultimately place a fly rod in our hand 90 percent of the time and a martini the rest of the time. This is nothing to worry about, just the forces of evolution at work-natural selection and all that. A fellow we once met in the Men’s Bar of the Biltmore Hotel in Manhattan, while screwing up our courage to enter the tackle department at Abercrombie & Fitch, reminded us of this, and that this evolution extended far back into time, beyond the anthropoid, to that stage of our development at which we had gills instead of ribs, He had actually gone so far as to trace his lineage, with the help of a Yale ichthyologist, and had found that his people had originally been brown trout. We started to pursue this a bit further, but he suddenly rose to a Dry Martini and was never seen again.

Can you tell that it is mid-winter in Milwaukee? As I write this the wind-chill in 30 degrees below zero.
Posted by Erik Helm at 1:02 PM