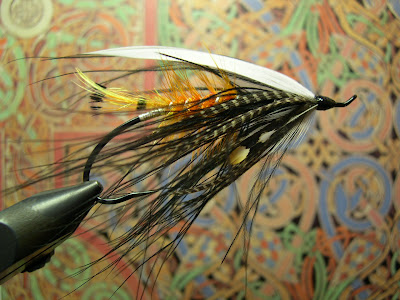 Meet the Akroyd. Named for Charles Akroyd, this fly is a classic of the Aberdeenshire Dee, a river in Scotland which gave us a whole style of fly, and perhaps my favorite: the Dee fly.

Long before waddinton shanks, tubes, temple-dog flies, intruders, and etc. large flies for winter, there were Dee flies. Originally tied on very long shanked hooks, these flies were heavy and sank well to temp dour Atlantic salmon in spring flows. ( The Dee is a springer river.) This fly is size 3/0 tied on an Alec Jackson hook. It is a bit short, but whatever. It is sparsely dressed, but with long hackle for movement. For us, this is a winter fly. Fish it on the Olympic peninsula or the Skagit with a dry line and McMillan methods of presentation and mending. It worked for dukes and earls, the royal family of G.B. and army officers and gentlemen fishing the Dee, and it will work for you too. If you are scared to fish it for fear of losing it, then simply dress it in a reduced fashion.

The original Akroyd utilizes white-tipped turkey for the wings, but I don't have any :(, so I tied it with white wings, as many have done before me, back to the 19th century. Believe it or not, Charles Akroyd referred to this fly as "The poor man's Jock Scott."

“Major Traherne tied a beautiful fly, and it gave me great pleasure to watch him. He took the most extraordinary pains to dress them perfectly, and I am sure I have seen him taking an hour trying to get a feather to sit properly. I always used to dress my own flies, but I dressed for speed, not for appearance; never the less my rough and ready affairs caught fish every bit as well as Traherne’s fancies. I hardly ever dressed two flies alike; I just sat down and dressed away just as the spirit moved me. This was the year in which I produced the “Akroyd” fly, which I am told by those who at the present time are fishing the with it catches more fish than any other pattern. It is not dressed now in quite the same way as when I dressed it. Where the fly-dressers now use a cock’s hackle dyed yellow, I put in two long golden pheasant’s crest feathers running all the way down, my idea being that the glitter was more attractive than the dull hackle."

They are a bit complicated to tie, but worth the effort. I used extra large dyed blue-eared pheasant for the hackle, and I blended my own dubbing for the rear of the body (SLF and orange angora goat). It turned out pretty good, but the Golden Pheasant tippet sort of got separated, and I left almost too much room for the head.

So, you don't just have to use 'Jig and Lure' flies to catch your winter fish. However, I for one would cry if I lost this damn thing on a piece of rebar or a salmon carcass ;)
Posted by Erik Helm at 2:23 PM