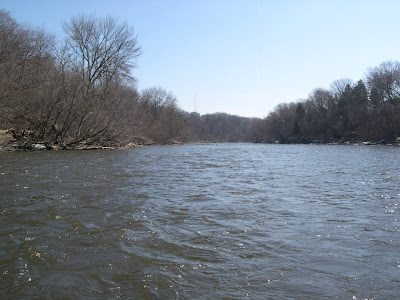 I fished the Milwaukee River on Saturday. Conditions were beautiful. Water was high and clarity was not at all bad. The water temperature was a bit low at 32.6 degrees, but I still managed to hook a fish. Brown or Steelhead we will never know because yours truly lost the fish after a few seconds. (Dreaded dangle hookup.)

Moving downstream, I waded into the heavy flow of @ 900 cfs, and began to swing a steelhead akroyd in a nice run, when the mother-load of flotsam came down the river from the Estabrook Dam. The ice had broken up and carried with it all of the debris that should in theory be removed by the county in fall. Bottles, logs, basketballs, sticks, more logs, trees, disposable lighters, spray paint cans, and every plastic bag known to man flowed down the river. 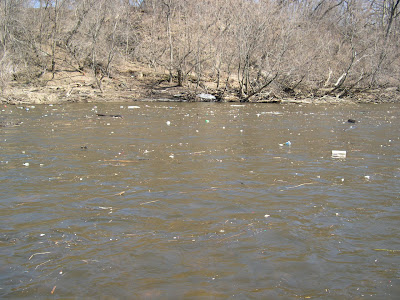 The ice and some wooded debris is normal, but this sudden release of litter was amazing to see. In a natural flowing river, the litter would come downstream at it's own pace, not all at once due to the dam. I had to wade to shore on numerous occasions to avoid being bombarded by the urban flotsam. I wish people would not litter.

Look at the first picture (before) and then the second (during the debris deluge).
Posted by Erik Helm at 11:34 AM