Of rivers, fish, and men 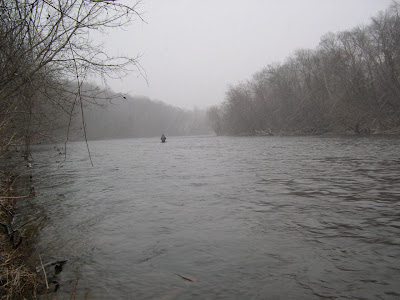 I fished the Milwaukee Friday and Saturday. The flow level was over 1500 cfs on Friday and fell to 1440 cfs on Saturday. Water clarity was as good as it ever gets. Friday was rather balmy, while Saturday proved why we in the Midwest say of the weather, "If you don't like it, just wait ten minutes..."

Saturday began with winds that kept switching direction from Northwest to West to North to Southwest, finally settling on howling from the north and bringing snow showers.

To me and a few die-hards, the river comes alive at over 1000 cfs. It roars and froths and pushes against your legs. One wades with caution and moves slowly lest the water sweep you away. The fishing and casting were challenging. Just getting one's fly to the proper place is hard enough in a river that is the size of the Skagit, but add the cold wind to Valhalla, and every third cast goes awry. My double spey sailed, while my reverse double was awful.

Some of the best structure of the river is hidden under these wild spring flows. Knowing the river intimately gives one the confidence to swing flies in areas that we know must hold fish. The water temps were against us for such heavy flows, with daytime temps in the sub 40 degree zone. 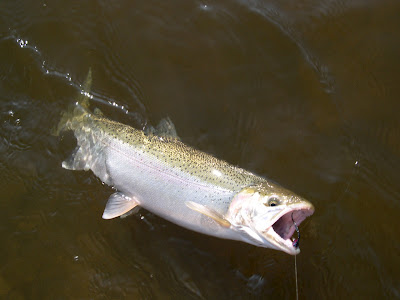 I fished alone on Friday and managed a nice small fresh buck, but on Saturday we convened the ancient order of what has been referred to as the "Milwaukee boys." Today this shifting group of veteran two handed addicts included Dave P., Joe S., Barry R., Brian K. and myself. We ran into Carl and a friend on the river. 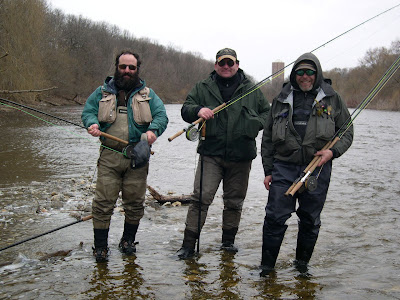 All in all, we landed two fish Saturday, and missed several more. I was very lucky to hit this nice fresh chrome hen of the Ganaraska strain in a waist deep boulder garden. I went to strip the line and take a step, and soon as I moved the fly, she pounced upon it. Good juju! Barry landed a nice fish in a run upriver several hours later. Joe S. showed me how the short slot water game is played as we fished from shore with tiny casts to pocket water.
Brian K. showed how neither wind, snow, rain, or blustery winds can stop his graceful casting. Dave P. hucked out his signature deep running "Stuff that he just makes on the river." 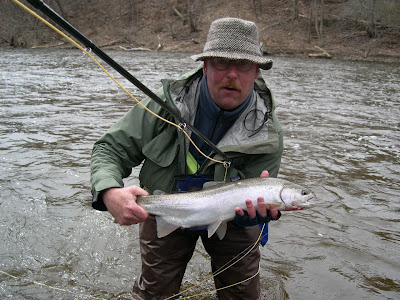 The river had a decent number of fish in it, and we saw several porpoise, but with the heavy flows and cold water, it was the rare hot fish that would rise and smash the swung fly that is our peculiar passion.

We all fished different flies and styles as befits our different personalities, but took time out to sit on the bank and marvel at what we had in this river. This is what we love.

Then the snow and wind drove us off, and we retired for pizza, beer, and fishing stories. 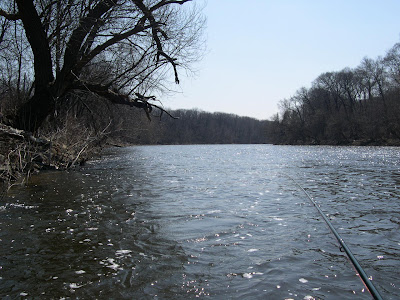