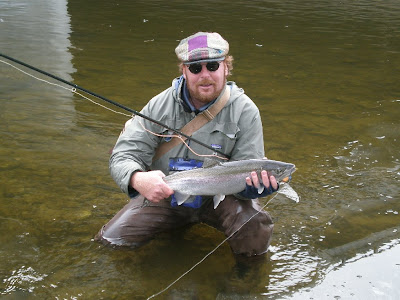 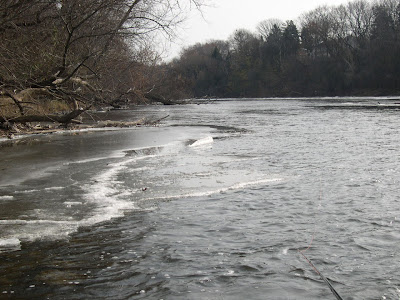 I went down to the river the other day just because… well, it was good exercise, I needed to get out, etc.
The Milwaukee was about one quarter covered by shelf ice in the slower sections. I had to break ice to get into the river. Conditions were clear and low. So low, in fact, that I had to use a clear intermediate polyleader to avoid getting hung up on rocks. For the few PNW readers out there, this is classic winter steelheading in the Midwest. Water temp was 33 degrees, air temp 38 degrees. I didn’t think I had a hope of touching a fish. I was in the tail of the run making literally the last cast before my fly would hang up on shallow rocks when I got this pretty fish. Carl, a fellow addict from Illinois watched the whole thing. He was positioned on the bank adjacent where my fly was swinging. He saw the fish appear like a ghost out of the deeper water, follow the fly into the shallows, and eat it. The fly was an unweighted string leech which was probably running two or three inches deep. Steelhead are aggressive fish! Why the fish are choosing this time and conditions to come in from the lake puzzles me.
After a couple of hours, the shelf ice began to break up and I kept getting hit by mini-icebergs in the rear end. When my fly froze into the ice on the other side of the river, I broke it off and called it a day. A VERY lucky day with frozen feet.

Thanks to Cory and Crystal Tedesco for the picture.
Posted by Erik Helm at 11:41 AM