As promised, I tied and gathered more hairwings from the old fly boxes. There are both more traditional flies in this set as well as some more modern flies from the PNW in the style of Syd Glasso. I need something to keep me occupied as I watch our society fall apart… 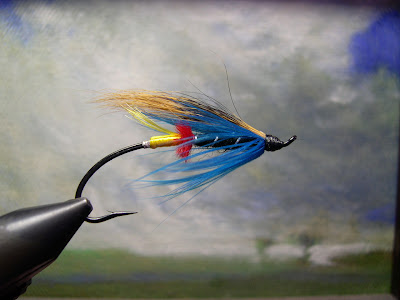 The first fly is the Black Doctor. A very old pattern for Atlantic Salmon in the British isles, the black doctor works well both as a small summer fly and tied as a winter fly. It has a bright red ostrich herl butt, combined with blue hackle and yellow floss to provide visibility. I tied this one with fox squirrel for a wing. This fly was probably tied in 2001 or so. 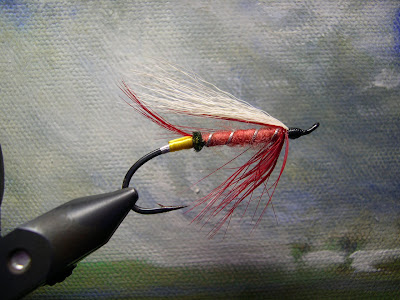 The next fly is an unnamed original by me. It uses coral dyed merino wool for a body and pink dyed gold pheasant for a throat. It has a butt of peacock herl. This was one of the first hairwings I ever tied. 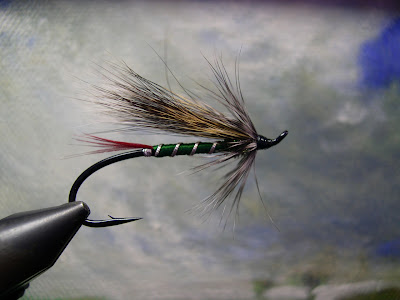 This fly is another old pattern called appropriately the grizzly king.
It has a green floss body that I added a bit of peacock herl to just because, and grizzly hackle. It sports a wing of gray squirrel. It is a very good low water fly or a good comeback fly. It also catches trout in smaller sizes as a traditional wetfly. 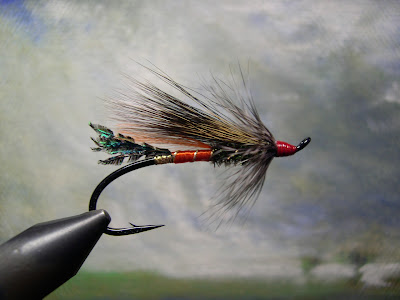 Here we have another old favorite, the rusty rat. The rust body is formed of burnt orange floss, the tail is of peacock sword, the thorax is of peacock herl, and the wing is gray squirrel while the hackle is natural grizzly. A fun fly to tie and fish. Once again, it’s more natural coloration make it a good low water pattern or comeback fly. 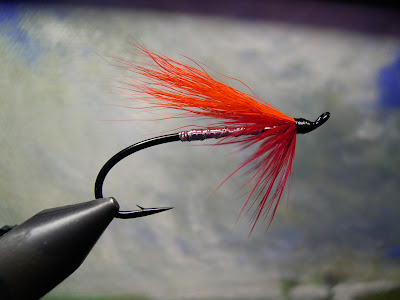 The next fly in this series is the fall favorite.
It is tied with flat silver tinsel for a body, to which I added a rib of silver oval to keep it from unraveling. The wing is orange kid goat, while the hackle is red. A popular fly in the PNW and very simple to tie. In its larger sizes it makes a good winter fly. 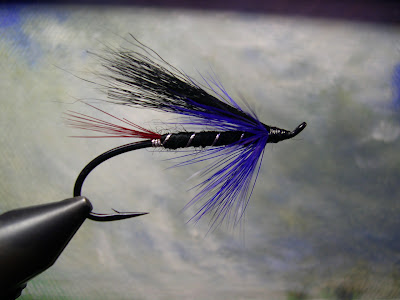 This fly is called the night dancer and was conceived by Frank Amato.
It has accounted for thousands of steelhead on the Deschutes at first and last light. The concept is that a dark fly shows up better against the lightening sky at those times, but it has caught fish at every hour. A popular fly, it adds a bit of color attraction by using purple hackle. 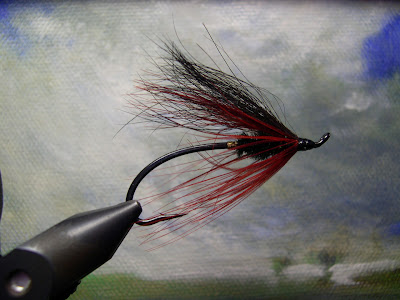 This next fly is an unnamed original by me. It shows a PNW ‘spey’ style combined with extreme low water body style of peacock herl. The wing is black kid goat while the hackle is dyed red golden pheasant. It is untried but was conceived as an extreme low water fly in runs where the fish are more ‘trouty’ or highly pestered. 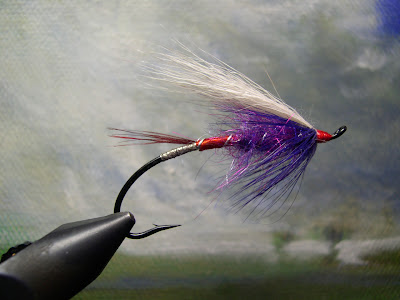 This fly is another unnamed one by me.
It is tied in the more glowing and bright colors, and the style of elongated tag, butt, and seal body with fiber tail are in the tradition of the late Mr. Glasso.
The body is purple haze SLF. I used fibers from a dyed golden pheasant for the tail. I prefer doing it this way because it sits in a curved upright position, more like the golden pheasant crest that it is imitating. Saddle hackle fibers sit straighter. This example is tied as a summer fly on a light wire hook. Good for a searching pattern in big water or slightly off-color water. Proven on the Klickitat when the water was ‘green’. 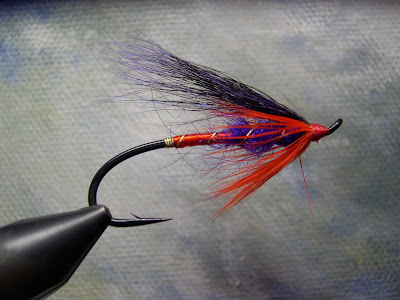 The next fly is another original by me, this one is called the summer day.
It was conceived at the same moment as the autumn twilight, but uses seal for the thorax. It is a bright fly and has caught fish on the Milwaukee (look closely at the photo on the post “meditation on the swung fly”).
I like it for big water searching as well as for fast riffle water, but I tend to fish darker flies most of the time. 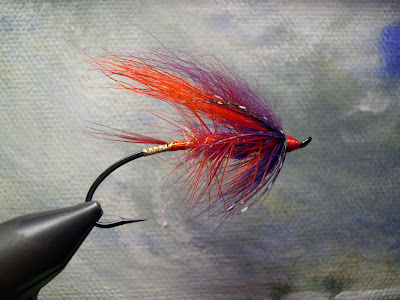 The next fly gets a little more complicated, and is called the nova.
Its lineage traces back to the flies tied by Glasso and McNeece.
It has an optically blended color pattern designed to effect an interior glow. The purple hackle folds back over the orange rear when in the water, and it shimmers and glows. The wing is of orange kid goat topped by purple arctic fox. The body is of orange SLF followed by purple SLF ribbed by an orange saddle hackle and gold oval tinsel. The veiling over the hackle is natural guinea fowl. 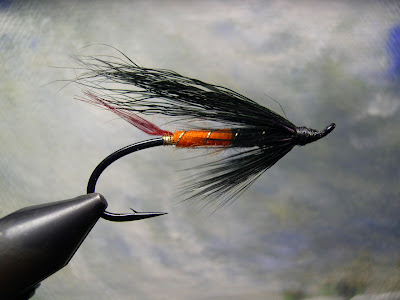 Here is another more traditional fly called the black max.
It originated with Shewey and is a modification of the max canyon. It also resembles a reduced steelhead ackroyd and many of the patterns originated by Ed Haas. I nailed a nice 18 pound steelhead on this one in September of this year, but it had a white feather wing. (it would not have made any difference what I used ;)

The more traditional style of hairwing uses a full body tied back to the hook gap or barb, and a wing that extends to or slightly past the bend of the hook. It should be tied fairly sparse, and not over dressed. The low-water style represents a shrinking of the fly. The body begins in front of the gap, the wing is sparser and the hackle shorter. It is like tying a size 4 fly on a size 2 hook for lack of a better explanation. It is designed to be used in clear water and/or low water and is dressed sparsely so as to not spook the fish.
The modern style (Glasso) is more flamboyant, and uses materials and dressing styles found on Dee flies from Scotland. They are a blending of modern and the 19th century.
Posted by Erik Helm at 1:19 PM