How to dress for Steelhead and Atlantic Salmon fishing 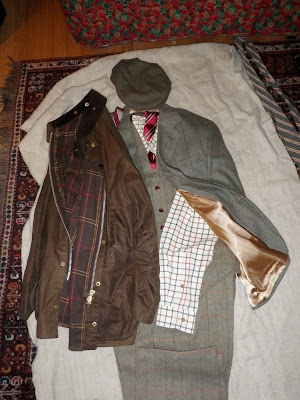 The other day I was re-reading a history of my hometown when I came across a photo from the early 1900s. It showed a dozen or so men and boys fishing in Lake Michigan off of a pier. They were using long cane poles and bait. Each was dressed in a shirt and tie and a bowler hat. Not a sport shirt in the crowd. That set me thinking about the sport of fishing and dress in general.

Now I am known as something of an oddball. I am one of the last people of my age to actually study classic English dress, and often enter the river sporting one of a multitude of Irish hats, or British cloth caps. Flyfishing, like all other sports these days, has its own couture. Trout fishers have the Lee Wulff vest, the ubiquitous ball cap, the necessary or unnecessary do-dads and accessories attached to zingers, and the little net hanging from the back. Want to be a trout fisherman? Then one had better look like one.

At least this is better than the NASCAR/BASS circuit, where participants become walking advertisement space; billboards to commercialism.

After a long string of emails with a colleague concerning proper traditional dress for Salmon fishing in the UK, I began to think of the differences between the aristocratic and exclusive nature of Salmon fishing, and the rather proletarian nature of Steelhead fishing.

Atlantic Salmon are the nobility of fish. In general, one also needs to be a nobleman or at least wealthy to enjoy good Salmon fishing. Private associations, clubs, and districts own the rivers, with some less quality water being set aside as public. In Scotland, Salmon fishing was divided by class. The upper classes (nobility, peers, wealthy industrialists, etc.) leased the fishing from the crown, while the estuaries were reserved for the lower class tackmen that pulled nets behind boats. Water bailiffs made certain that Joe lunchbox never poached the river itself.

North American Steelhead in contrast is the poor-man’s Salmon.

Rivers are free and belonged to the public in many cases. Licenses are inexpensive, and everyone can participate in the sport. Sort of egalitarian fishing. (As long as there are fish left…)

The way we dress for the two sports and their complete contrast struck me as fodder for a little humor. So here is my tongue-in-cheek guide to dressing to fish for the respective species.

Purchase a Barbour Bordor waxed cotton jacket for $399.00. Add a suit consisting of matching tweed breeks, vest and jacket. Partner that with several tattersall shirts. Should run between $899.00 to $1,200.00 Accessorize with leather-lined Wellingtons for $430.00, and a Harris Tweed cap for $50.00 Woolen knit or silk regimental tie will cost about $30.00.

You should look quite sporting while in the bothy, or seated at the dinner table sipping a fine merlot.

Go to garage. Locate old hooded sweatshirt you use when you work on the car. You know… the one with the hole in it caused when it got tangled in the torque-wrench; the one bearing a large oil-stain. Tear off the sleeves. Wear this over a piece of capiline so old that you can see through it. Add either a ball cap obtained from a Nebraska farmer, or a knit hat with holes. Spend $499.99 on sunglasses. Find abandoned gloves behind dumpster. Cut off fingers. This will cost nothing, and provide for a good conversation piece, as well as keeping your hands warm. Spend $479.00 on Simms jacket. Use sleeves torn off old sweatshirt as socks.

You should look quite sporting while passed out in your car, or seated at a picnic table eating a gas-station chili-dog.