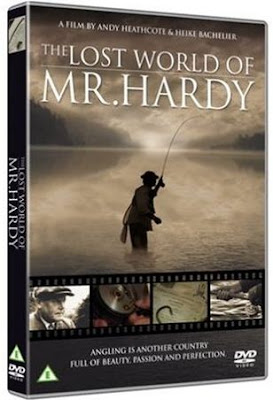 “This is history!” Says the last Mr. Hardy emphatically, as he watches a film from 1939 showing the fly-casting of a rod he himself designed.

The Lost World of Mr. Hardy is at once both an historical documentary and a requiem. An elegy to a lost time when the craftsman took as much pride in their fine hand-crafted rods, reels, and lines, as the discerning anglers around the world did in their use; an elegy to the craftsmen and women themselves who, apprenticed at 13 or 14 years old, spent their entire lives dedicated to producing the world’s finest fishing tackle. That was Hardy Brothers of Alnwick, producers of the Perfect fly reel, the Palakona rod, the Smuggler, jewel-action bait reels for Zane Grey and tackle for kings and maharajas. A family of tackle makers who spanned the 19th and 20th century.

Subtle and reflective piano music accompany the slowly unfolding scenes. Period black and white films of sportsmen decked in country dress fishing for salmon are mixed nicely with scenes of nature; the sounds of a riffle trickling or the drops of falling water. Loops unfurl over the water as herons crouch and songbirds sing.

If one loves the traditions and history of fly-fishing as well as being familiar with, or even owning a piece or two of Hardy tackle, you may very much enjoy this film. If these conditions don’t apply, then you may enjoy the nostalgia for the first half-hour, and then simply pass out. This is a film about passion… the passion of fine tackle and its history at Hardy. If one has any sensitivity, it may bring a tear or two.

Several scenes of the historical footage are priceless. In one scene, one of the Hardy Brothers fishes a salmon river at full spate with a spey rod. After hooking several salmon, one gains new respect for the ghillie. It seems that in order not to over exert himself or get his lovely shoes muddy, Mr. Hardy would hand the rod to the young Ghillie, who would run off chasing the salmon down the river and out onto rock bars while the sport lit a cigar. The joy seemed to be in the hooking of the fish. The rest was a job for the plebs. The fact that these fish, which were up to 50 pounds were hooked and played on 8/0 Black Doctors might give us some food for thought.

Another scene showed and described the bombing of the famous London Pall Mall Hardy Bros. shop during the Blitz in WWII.

In several repeating scenes, we see auctions and large tackle sales where Hardy products of the past are featured, and prospective collectors finger tackle carefully, examining old reels and rods with jeweler’s glasses. Then we see the same tackle sold for unbelievable prices.

The film also displays the meticulous art of tying full-dress married wing salmon flies by hand and without a vise, and shows Ken Middlemist at work, the last of the Hardy fly tiers.

The stark reality of the late 19th century and early 20th century apprentice system becomes quite apparent in the film. Apprentice fly tiers would tie fly after fly on the same hook, have it critiqued, and then snip off all the fur and feathers and start again. For the first number of years, they were not allowed to complete a fly for sale. This sort of purgatory of learning also included several of the Hardy family who would constantly berate the workers, check their work, and if they found it wanting in any way, smash it to pieces in front of them. The worker would then not be paid for his work. No bangers and mash for you this week!

The funny thing about this system, which was no different than other industries at the time, was that the workers were very dedicated to Hardy’s, and all those years spent meticulously learning their trade paid off in the quality of goods they produced.

If the film is an elegy to a lost time, one may ask where did it all go? The answer is here in the film as well. Modern production methods, new materials, and a search for cheaper production costs slowly led the industry-leading company to outsource their production. Hand-made split cane gave way to fiberglass, and the young girls that sat in rows tying trout flies now sat in those same rows in Asia and Africa. Slowly, but inexorably, each of the crafts was eroded, until Hardy Brothers became a design and marketing company instead of a production company. This was not a smooth process, which the film hints at. Indeed, at several points in their later history, Hardy’s direction and product offering became rather lost. It was as if they were looking for their way in a dark room with no light. Hardy had their feet rooted in tradition and history, and were reaching out to the new high-tech market: disc-drag reels, lighter rods, etc. To give an example of the opportunities misused, Hardy may in fact be the first company to build a graphite rod, but missed out in bringing it to market like the could have.

As the film wanders to its conclusion, several elderly workers and fly fishermen reminisce about what the loss means. The term ‘bespoke’ is a British one, meaning hand made to the customer’s specifications. The bespoke industry may have gone from Hardy’s, but as the film shows, it just turned around and emerged as a cottage industry, where the craftsmen work from their tool shops in garages and produce hand made reels and cane rods to this day.

Hardy’s may have changed, and the world of the true craftsman and the gentlemen that used their tackle lost, but the tackle itself was so well made that it exists today as collector’s items or is cherished on the river.

They say that if an author’s work is read, than he or she lives on through the words. If this is true than the lost world of Mr. Hardy is not altogether lost. It can be found in that wonderful ratchet sound of their reels still heard today, crafted by men and women in a lost time. The time may be history, but the appreciation of their craft is not.

If you are a fly-fisherman and a fan of fine tackle, this film, especially its historical footage, may make a welcome addition to your collection, and serve as an inspiration much as the old Hardy tackle catalogue did to several generations of dreamers. E.H.
Posted by Erik Helm at 11:35 AM