A while back, I posted a picture of this fly, and some of you wondered if I had fished it. New designs and prototypes are fine as art, but until actually tested in river conditions, they are an unknown quantity. 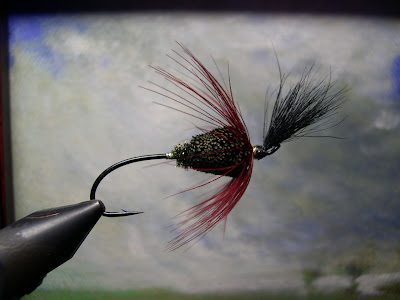 So, this fall I did fish the N.H.S.B. Here are my conclusions.


The fly works as designed. The bare hook at the rear anchors it, and the radically tapered head pushes water. I did not need to place a hitch on it, although I have no doubt it would work with a hitch just fine. I did not catch anything on it, but that is my fault. I only used it a couple of times, once in a run that was most likely fishless, and the second time as a comeback fly for a fish that chased and boiled.


The action of the fly was solid, but after around an hour or so of being in the water, it had a tendency to sink into the surface film. All I had to do was squeeze out the water and it worked for a further half-hour or so before becoming waterlogged.


As graded by the harsh professor:


Definitely a fly for faster water. Works well in riffles. Works fine in glass water too, unless waterlogged.


And there we have it. From concept to vise to river.
Posted by Erik Helm at 2:54 PM