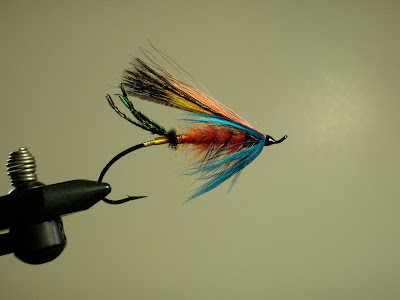 I recently obtained some dyed coyote hair from a friend. (Thanks Dave!)

The guard hairs were just crying out with wild colors, so I sat down at the vise and answered the call of inspiration. The idea was for a winter fly I could fish on a light sinking poly-leader. I wanted this fly to have calling power.

I actually liked the first result, which is often rare. I have a whole box of reject ideas; things that seemed like a good idea at the time, but when they came to fruition, looked like cat pee. That would make an entire article there; things that didn’t quite make it.

When posting this fly on a tying forum, I wondered aloud what other names people would come up with. Marmalade Skies was a clear winner. Lucy in the sky with diamonds…

I have a suspicion that the early spring fish in dark cold water may like this.

* Note: No hallucinogenics were consumed in the conceptualization nor the realization of this fly. Is that a flying purple monkey?
Posted by Erik Helm at 10:08 AM

Email ThisBlogThis!Share to TwitterShare to FacebookShare to Pinterest
Labels: Flies