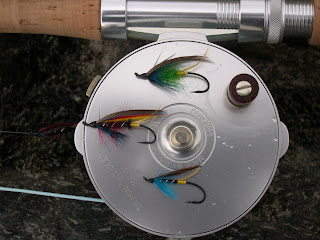 Part one: feast and famine

I arrived at the Kooskooskee river in the early afternoon of a hot day. Wanting to be in the water, I set up my tent quickly, had my inevitable encounter with the crazy camp host, and ran into two regulars I know. They said the fishing was slow. It was too hot, we needed rain to get the fish moving, we needed a cloudy day, the stars were not aligned right, etc. etc. I took it all with a grain of salt. Anglers who catch fish never have excuses, but those who don’t always seem to engage in endless speculation. One thing was clear; No one would catch a steelhead by sitting in camp. I headed downstream into a fast riffle run, figuring that in the heat and lowered water the fish would be hiding in broken well-oxygenated water. I was surprised to have the run to myself. Eight casts in my size 4 thunder and lightning was hammered by a fish. I failed to drop line on the fish and lost it immediately. Right… I reminded myself about where I was, and entered into the steelhead Zen zone. There were fish in the run, so no more mistakes. My casting was all screwed up due to the fast water and deeper wading. This was a real western river, not the ankle-deep Milwaukee. Three casts later I received a pull. I worked down the run without any more action. River two, Erik zero. Nobody was waiting to get on the run, so I went up to the top and started again. In the same spot the other fish hit, I received another sharp pull, then nothing for the rest of the run. O.K., I had located the bucket situated in a fast riffle and obviously holding steelhead. I waded out a little further the final pass through the run as to present the fly more slowly and more broadside to the fish. When the fly reached the sweet-spot; WHAM! Fish on! 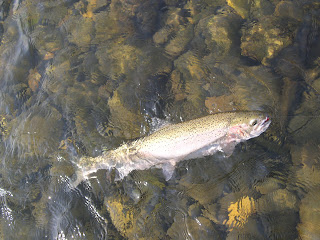 The steelhead ran the downstream the length of the pool causing my reel to scream for mercy. Instant backing! After two more runs and a few jumps, the fish came in and I was the proud father of a 27 inch wild buck. Cool, this was going to be easy! Everyone back at camp moaning, the river free of anglers, and hot wild fish to swing flies to; paradise or steelhead Valhalla was mine.

I should have known better. My fishing goes in strange JuJu cycles. Usually if I wade in and catch a fish right away, I might as well go home, for that usually is the only fish for the day. In the back of my mind a little voice said “Now you are in for it Erik”. Sure enough, my initial success was to foreshadow a royal skunking. The rest of that day and for three days afterward I would search for fish with futility, fishing runs both up and down the river which usually produce. Nothing, not even a pull. I saw no fish rolling or jumping. By the weekend, I was beginning to doubt my own skill, second-guessing everything I was doing, and fishing without confidence. Other anglers were pounding fish that weekend, but not me. Finally, it dawned on me that I was fishing locations that were not holding steelhead. I caught trout and whitefish, so my fly was swimming well, but I just was not making the connection as to where the fish were in the river. The steelhead arrive in pods or groups. Get into them in a set of runs where they are holding and one can have a multiple fish day. I had just wasted time fishing runs that had produced last year at this time. Now I knew I had to change tactics.

Greeting my exploring new sections and runs was the weather. Clouds piled above the river canyon and winds picked up to over 30 miles per hour. A wind front literally blew me over. I tried to cast through the upstream wind, but when I held up my rod, all 55 feet of the head of the line went dancing in the wind upstream of me at a 90-degree angle. I went back to camp to make certain my tent was intact. Arriving at camp, I was greeted by dead calm conditions. O.K., so back to fishing. I waded out to the new run I had just been blown off of, a wade that included navigating a fast back channel to get out to an island in order to fish a boulder strewn rapids filled with broken ledge-rock. Five casts in, the wind came back with a vengeance. I was reminded of the Jethro Tull song Cold wind to Valhalla. I sat down on the island defeated, pulled the hood of my wading jacket over my head, and meditated. Boy, I sure was paying for that first fish. The river was laughing at me. I could literally hear it. I was going to have to work for these fish; work hard. This river canyon literally breathes. In the morning, cold air pours down into the valley forming a downstream wind. About noon it reverses itself and forms an upstream wind. One picks his runs accordingly, or ducks out of the way of the fly.

I tried to get on the several runs that I know that were the lowest down river, but without avail. People were literally camped on them. Several guys I know were living in their cars parked on the runs. That kind of stuff is fairly cheesy in my mind. One guy in a camper was stringing up a rod in the parking area to the run I got my only steelhead in. I greeted him, and he said that he had gotten two fish out of that run at first light. He was now stringing up a custom 16 foot rod and was going to “play” on the run. His buddy was fishing it now. Way to hog a run, friend. Rotate the pool between two guys so nobody else can get on it. Nice.
I went back to one of the best runs on the river and to my surprise, there was nobody on it. I scrambled down avoiding rattlesnakes and poison oak. The light was still off the water; a deep slow run ideal for waking flies. I started casting a bomber. Ten casts into the run, some guy yells down to me from the cliff above “Hey, are you going to fish the whole run”? He asked if he could cut in downstream a ways because he was old and short and couldn’t wade the top. I let him go ahead. Good deeds build good karma, but it still irritated me that I finally got on this piece of water, just to get asked for a low-holing. If this was how it was going to be on this run, fine. There were other pieces of water on this river. As I finished the part of the water that was ou 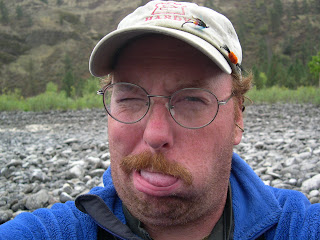 t of sunlight, a drift boat crowded me pulling plugs within casting distance. The drift boat was in turn low-holed by a jet boat. I got the point. O.K. Lewis and Clark, time to explore new runs further downstream…..
Posted by Erik Helm at 12:09 PM