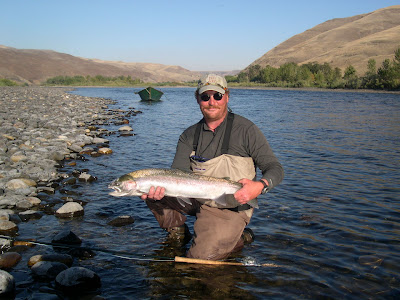 After catching that big fish, I decided to return to the scene of the crime later that evening. A drift boat was in the run when I got there and it was filled with dogs and parked under the sweet spot. As I started 100 yards above the boat, I counted seven anglers on the run on both sides of the river. I was the last, but had falling light in my favor, so I decided to work down through it despite the pressure. My casting was struggling because I had muscle fatigue from fighting the big fish, and so was unable to tell that I was overpowering the rod. Soon I had worked down nearly to the boat. The dogs had abandoned it in search for their owners, or else smelled me coming. The occupants of the boat were walking upstream and arrived at the boat. They greeted me and talked of the beautiful evening we had. We were exchanging small talk with me standing ten feet directly out from the boat when my cast was hammered on the dangle. I was literally in mid-sentence when the fish grabbed only 20 feet out into the water and hooked itself, water that they had just fished. The guys on the other side of the river hadn’t caught anything either. I must have saved up the good JuJu for this day. I soon landed the fish, a beautiful 35 inch hen, and the owner of the drift boat shot the glory photo. It turns out that he was none other than guide Levi Carson, who was born on the river. Thanks Levi! And…. Sorry about the hat trick…..
Posted by Erik Helm at 4:18 PM