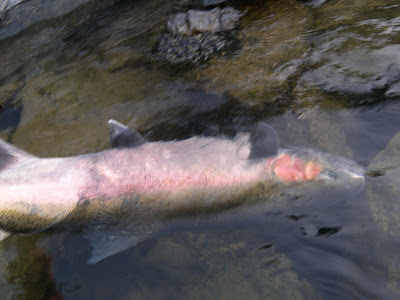 On the evening of my last night on the water, I ran into my friend William. He was in the run I wanted to fish, and as I pulled up in my car, he motioned to me to come on in. He was halfway through the run, and I began the long and dangerous walk towards him over broken scree and loose shelf rock. I sat on the bank and we caught up on fishing stories, etc. He had been fishing another river, which is why I had not run into him for a few days. He had landed a 38 inch wild buck just a few minutes before, and as I watched, he hit a wild hen on a bomber. I got to hear his hand-made reel for the first time. Beautiful reel and beautiful sound. Watching William is like looking at poetry in motion. Everything is right; the cast is nearly flawless, the swing perfect, and his smile infectious.

I started fishing the run a little further down than I should, due to another angler in a run above who seems to think that the whole river is one run and that he has the right to all 600 yards of this water down from his riffle. Because the flyline to my traditional outfit was falling apart, I was using my shooting head outfit consisting of a vision ace and 14 foot ploy leader fired from a Loop greenline 13’ 2” cannon. My running line k 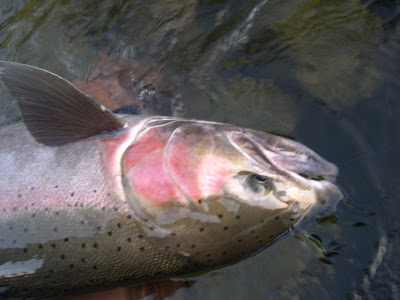 ept tangling again. I HATE airflo ridge running line. As I worked down the run, William skidaddled, leaving me fishing the run after the master. When I had progressed to the spot in which I had hooked and landed a nice fish last year I received a thump. Thump? What the? I was definitely hooked up with another soft take. The fish let me just reel him in, and I expected a quick landing. I got him in to the point where the leader was within the guide when he saw me and decided he didn’t like my scraggy looks. WIZZ! Went my huge Sage reel. Out to the middle of the run he went. Interesting. Then he porpoised. Oh oh. Was that a salmon I had hooked? No it was a steelhead the size of a salmon leisurely swimming and porpoising with my white wing black max in it’s jaw. At first I didn’t think this was my fish, so I raised my rod and tightened the line. Sure enough, the leader led right to this… this… thing. I knew I was in for it. The run is sheer rock and huge boulders. There would be no easy landing place. I would be lucky if I didn’t get injured or break my rod. To make a long story short the twenty minute battle saw me nearly submerge myself, scramble over rocks, scratch my reel and abandon my rod altogether as I fought the fish to hand using my own hands and just the poly leader. It was like a fight between two drunks. Neither of us could get the upper hand, and neither of us would listen to reason or give up. I finally landed a @36” wild buck. My poly leader was destroyed and looked like a slinky. I was done. I climbed the cliff, ate a handful of blackberries, and symbolically clipped off the fly.
As William later said, what a way to go out…. 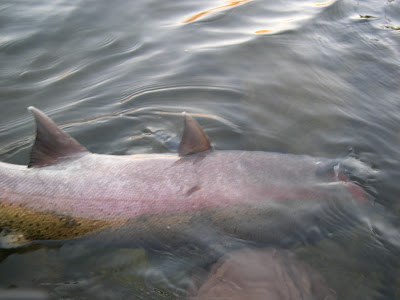