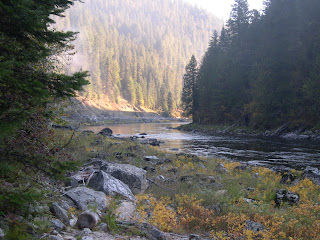 I have passed the Lochsa River (meaning fast water in Nez Pierce) in Idaho several times and have been profoundly affected by its sublime beauty. To me, it is the most beautiful river in the world. It runs from just below Lolo pass down to Lowell, and is bordered by highway 12. It is popular in spring with rafters with a death wish, as it is full of huge boulders, and runs high and fast from snow runoff until fall. The height of the mountains often means that the river valley is covered in mist. Bears, Mountain Lions, Elk, and Moose can be seen. Much of the water is quite fast and shallow as well as being nearly gin-clear, but every mile or so, there is a deep pool or series of pools after rapids.

This year I brought my 5-wt. rod along, bought an Idaho license, and spent the first day of my trip casting and climbing for wild west-slope cutthroat trout. I spent the first night at Lee Creek campground on the Montana side of Lolo pass, and after my day of fishing spent the second night on the lower Lochsa at Wilderness Gateway 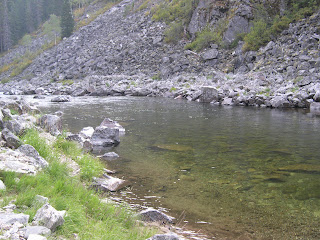 campground. Both of these sites are located in near pristine wilderness, especially Wilderness gateway, in which I was able to camp within 100 feet of the river.

I started fishing fairly high up on the Lochsa, and planned to just drive downstream and fish along the way. I kind of like having no definite plans, just a peaceful and easy state of mind, which is easy to achieve in this primeval river valley.

The first pool I picked had a green tint to it. The green told me it was deep and slow enough to hold algae, and therefore caddis flies could find forage and cling to the rocks. Much of the river is too fast for anything to live in it. The first problem on the Lochsa is how to get down to the river. The canyon walls and river are full of boulders and scree, and are often sheer, dropping at impossible angles to the river below. I scrambled down slowly, 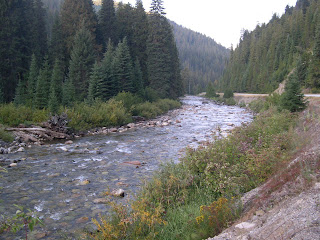 wishing that I had a set of crampons and some rope. When I finally did get down and set foot in the river, I found that even the places that look knee deep were often in reality chest deep or worse. The wading was as bad as anything I have experienced. Loose round cobble covers the bottom, broken by huge slippery boulders ranging from the size of a car on up to thirty feet across. I took it slow.

The cutts were there all right. They were rising to what looked like size twenty PMDs, possibly tricos. I ate a few by accident, but never caught one to make certain. The resident caddis flies of the river run about a size 18 or 20. I had entire boxes of flies, but of course, no small caddis or tricos. Instead, I had stimulators and hoppers, which is what the books and other fishermen told me to bring. Cutthroat are supposed to be dumb, and one could throw anything out there that was buggy and get a bunch; kind of like western brook trout. I found them dumb, but not stupid. With a hatch on, I had to come close to the right pattern, even if it was ten sizes too big, or not quite the right color. White Wulffs worked, as did X-caddis. The best producing fly was a parachute PMD, size 18, which I soon lost to a fish. When I did land a fish, it was about 12 inches long and beautiful. Spotted on the side concentrating at the back and rear, rose che 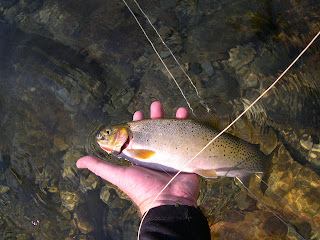 eked, and with that tell-tale red slash that gives it its name. This first cutthroat I ever caught was the wild ancestor of the fish that Lewis and Clark encountered in the fall of 1805. I felt like I was holding a connection to the past, a window in time. No cell-phones, no noise at all, only the voices of the river as it whispered and roared in its race to form the middle fork of the Clearwater.

I caught about a dozen fish ranging in size from 6 inches to a foot long. Because I forgot my trout net, bringing them to hand was often difficult. These fish are so squirmy that they often get off when you try to touch them to remove the hook as if to say “Hey, I am a wild fish, no touching with human hands!” I agreed, and let them go. After all, they had survived in the river since the last ice age. I was just happy to have been given a short glimpse at the timeless beauty of evolution and life, and hold in my hand for a short instant, a real gem.
Posted by Erik Helm at 3:38 PM